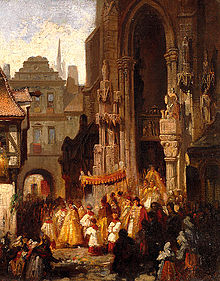 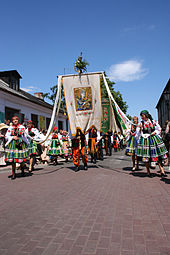 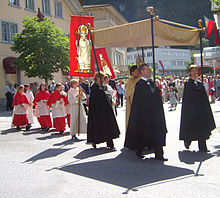 The appearance of Corpus Christi as a feast in the Christian calendar was primarily due to the petitions of the thirteenth-century Augustinian nun Juliana of Liège. From her early youth Juliana had a veneration for the Blessed Sacrament, and always longed for a special feast in its honour. This desire is said to have been increased by a vision of the Church under the appearance of the full moon having one dark spot, which signified the absence of such a solemnity.[2] In 1208 she reported her first vision of Christ in which she was instructed to plead for the institution of the feast of Corpus Christi. The vision was repeated for the next 20 years but she kept it a secret. When she eventually relayed it to her confessor, he relayed it to the bishop.[3]

Juliana also petitioned the learned Dominican Hugh of St-Cher, Jacques Pantaléon (Archdeacon of Liège who later became Pope Urban IV) and Robert de Thorete, Bishop of Liège. At that time bishops could order feasts in their dioceses, so in 1246 Bishop Robert convened a synod and ordered a celebration of Corpus Christi to be held each year thereafter.[4]

The celebration of Corpus Christi became widespread only after both St. Juliana and Bishop Robert de Thorete had died. In 1263 Pope Urban IV investigated claims of a Eucharistic miracle at Bolsena, in which a consecrated host began to bleed. In 1264 he issued the papal bull Transiturus de hoc mundo in which Corpus Christi was made a feast throughout the entire Latin Rite.[5] This was the very first papally sanctioned universal feast in the history of the Latin Rite.[6]

While the institution of the Eucharist is celebrated on Holy (Maundy) Thursday, the liturgy on that day also commemorates Christ's New Commandment ("A new commandment I give unto you, That ye love one another; as I have loved you." John 13:34), the washing of the disciples' feet, the institution of the priesthood and the agony in the Garden of Gethsemane. For this reason, the Feast of Corpus Christi was established to create a feast focused solely on the Holy Eucharist.

When Pope Pius V revised the General Roman Calendar (see Tridentine Calendar), Corpus Christi was one of only two "feasts of devotion" that he kept, the other being Trinity Sunday.[7]

The feast had an octave until 1955, shen Pope Pius XII suppressed all octaves, even in local calendars, except those of Christmas, Easter and Pentecost (see General Roman Calendar of Pope Pius XII).

Corpus Christi is primarily celebrated by the Catholic Church, but it is also included in the calendar of a few Anglican churches, most notably the Church of England. The feast is also celebrated by some Anglo-Catholic parishes even in provinces of the Anglican Communion that do not officially include it in their calendars. McCausland's Order of Divine Service, the most commonly used ordo in the Anglican Church of Canada, provides lections for the day. As stated above, in the Roman Catholic Church the celebration is designated The Most Holy Body and Blood of Christ (Corpus Christi). In the Church of England it is known as The Day of Thanksgiving for the Institution of Holy Communion (Corpus Christi) and has the status of a Festival. Although its observance is optional, where kept, it is typically celebrated as a major holy day. It is also celebrated by the Old Catholic Church and by some Western Rite Orthodox Christians, and is commemorated in the liturgical calendars of the more Latinized Eastern Catholic Churches. The feast was retained in the calendars of the Lutheran Church up until about 1600,[9] but continues to be celebrated by some Lutheran congregations.

In medieval times in many parts of Europe Corpus Christi was a time for the performance of mystery plays. In Catalonia it is celebrated with the tradition of the Dancing egg, with evidence from the 16th century. 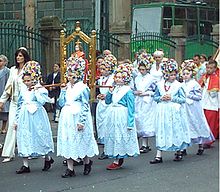 The Feast of Corpus Christi, which is a moveable feast, is celebrated on the Thursday after Trinity Sunday or, in countries where it is not a Holy Day of Obligation, on the Sunday after Holy Trinity.

The Thursday dates until 2022 are: 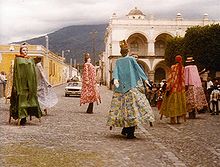