In Christianity, the term mother church or Mother Church may have one of the following meanings:

It is used as a title of distinction for churches established originally as the first mission of a particular region. For example, the Cathedral of Our Lady of Peace in Honolulu, Hawai'i was the site of the first French Catholic mission of the Congregation of the Sacred Hearts of Jesus and Mary, from which the modern Hawai'i Catholic Church was established. Under these circumstances it is today considered the mother church of all Hawai'i.

Mother church may also be a title of distinction based on the church's hierarchical importance. For example, among Roman Catholics the ecumenical mother church is the Lateran Basilica. Similarly, the church of the bishop of an episcopal see is often considered the mother church of a diocese. Holy Name Cathedral in Chicago, Illinois falls under this category. While it was not the first Roman Catholic cathedral of the city, it became the mother church due to the presence of the episcopal cathedra. This form of distinction based on hierarchical importance is usually used by the Roman Catholic Church, and, sometimes, the churches of the Anglican Communion, while most Protestant denominations tend to refrain from using the title in this manner. A notable exception is the First Church of Christ, Scientist in Boston, Massachusetts, which is commonly called the "Mother Church".

Chapel of a province 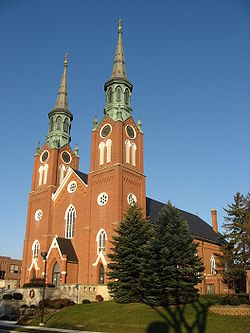 Motherchurch of the Missionaries of the Precious Blood in Minster, Ohio.

A fourth form is mainly used in Protestant churches. A mother church is a local church from which other local churches were planted. These churches are known as daughter churches.

The oldest churches of various religious communities are often considered the mother churches to others that follow either in that same tradition or, alternatively, in a reformist tradition. A church's hierarchical importance is often derived from its historical importance in its organization. In addition, in communities where churches may change their ecclesiastical association or become independent (particularly in Pentecostal, charismatic, nondenominational, and independent churches in America), a mother church may have daughter churches in one or more organizations.

The mother church of the African Methodist Episcopal Church

Mother Bethel A.M.E. Church in Philadelphia, Pennsylvania founded in 1794 is the "mother church" of the African Methodist Episcopal Church.

The Mother Church in Christian Science

The Mother Church of the COOLJC

Greater Refuge Temple Church in New York City is the mother church of the Church of Our Lord Jesus Christ of the Apostolic Faith, an Apostolic Pentecostal denomination. As such, it is also ultimately the mother church of its various off-shoot churches and organizations, including both Bible Way organizations and the Church of the Lord Jesus Christ and its daughter churches. In addition, churches that were independently founded by ministers who were ordained or directly influenced by the church's founder, Robert C. Lawson, or his spiritual successor, William L. Bonner, may also look to Greater Refuge Temple as their mother church, including the Progressive Church of Our Lord Jesus Christ, the Evangelistic Church of Christ, and many others.

The Roman Catholic Church is thought by some to be the mother church of the Protestant and other churches that broke away from it over time. Prominent among these are Lutheran, Reformed, Anglican churches and other Christian faith communities formed over time from these.

Additionally, among Catholics, Eastern Orthodox Christians, Anglicans and many other Christian denominations, Mother Church, or Holy Mother Church, is believed to refer to the Universal Church or Church Universal, which is considered to be the Bride of Christ and the Mother of all the Christian faithful regardless of manmade divisions or denominations.

The Mother Church of the National Baptist Conventions