The location of Cameroon 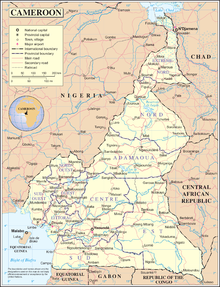 An enlargeable map of the Republic of Cameroon
See also: Index of Cameroon-related articles

The Republic of Cameroon is a unitary republic located in Middle Africa.[1] Cameroon borders Nigeria to the west; Chad to the northeast; the Central African Republic to the east; and Equatorial Guinea, Gabon, and the Republic of the Congo to the south. Cameroon's coastline lies on the Bight of Bonny, part of the Gulf of Guinea and the Atlantic Ocean. The country is called "Africa in miniature" for its geological and cultural diversity. Natural features include beaches, deserts, mountains, rainforests, and savannas. The highest point is Mount Cameroon in the southwest, and the largest cities are Douala, Yaoundé, and Garoua. Cameroon is home to over 200 different ethnic and linguistic groups. The country is well known for its native styles of music, particularly makossa and bikutsi, and for its successful national football team. English and French are the official languages.

Early inhabitants of the territory included the Sao civilisation around Lake Chad and the Baka hunter-gatherers in the southeastern rainforest. Portuguese explorers reached the coast in the 15th century and named the area Rio dos Camarões ("River of Prawns"), the name from which Cameroon derives. Fulani soldiers founded the Adamawa Emirate in the north in the 19th century, and various ethnic groups of the west and northwest established powerful chiefdoms and fondoms. Cameroon became a German colony in 1884. After World War I, the territory was divided between France and Britain as League of Nations mandates. The Union des Populations du Cameroun political party advocated independence but was outlawed in the 1950s. It waged war on French and Cameroonian forces until 1971. In 1960, French Cameroun became independent as the Republic of Cameroun under President Ahmadou Ahidjo. The southern part of British Cameroons merged with it in 1961 to form the Federal Republic of Cameroon. The country was renamed the United Republic of Cameroon in 1972 and the Republic of Cameroon in 1984.

Compared with other African countries, Cameroon enjoys political and social stability. This has permitted the development of agriculture, roads, railways, and large petroleum and timber industries. Nevertheless, large numbers of Cameroonians live in poverty as subsistence farmers. Power lies firmly in the hands of the president, Paul Biya, and his Cameroon People's Democratic Movement party, and corruption is widespread. The Anglophone community has grown increasingly alienated from the government, and Anglophone politicians have called for greater decentralisation and even the secession of the former British-governed territories.

The following outline is provided as an overview of and topical guide to Cameroon: 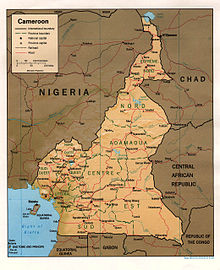 An enlargeable relief map of Cameroon 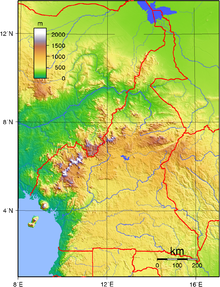 Republic of the Congo 523 km 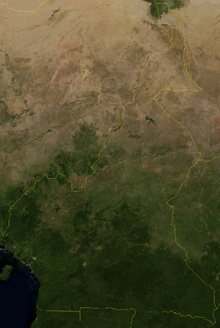 Government and politics of Cameroon

Executive branch of the government of Cameroon

Legislative branch of the government of Cameroon

Judicial branch of the government of Cameroon

The Republic of Cameroon is a member of:[1]

Law and order in Cameroon

Economy and infrastructure of Cameroon