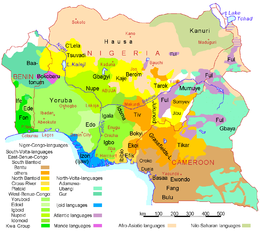 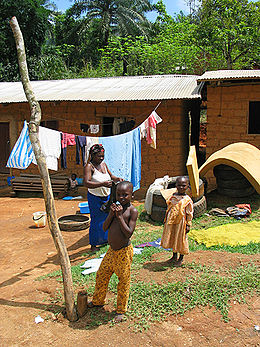 A Tikar family in the Northwest Province

The demographic profile of Cameroon is complex for a country of its population. Cameroon comprises an estimated 250 distinct ethnic groups, which may be formed into five large regional-cultural divisions:

An up-to-date demographic profile is unavailable from the country's government, which hasn't published census data since 1976.

The Cameroon government held two national censuses during the country's first 44 years as an independent country, in 1976 and again in 1987. Results from the second head count were never published. A third census, expected to take years to product results, began on November 11, 2005, with a three-week interviewing phase. It is one of a series of projects and reforms required by the International Monetary Fund as prerequisites for foreign debt relief. 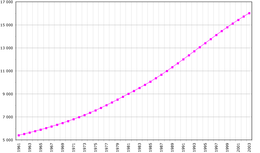 Estimated number of inhabitants (in thousands), based on 2005 data from the Food and Agriculture Organization.

Speakers of Makaa–Njem languages in Cameroon and neighbouring countries. 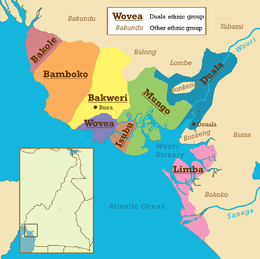 The ethnic groups of Cameroon who speak Duala languages.

19,294,149 (2010 est.)
Note: estimates for this country explicitly take into account the effects of excess mortality due to AIDS; this can result in lower life expectancy, higher infant mortality and death rates, lower population and growth rates, and changes in the distribution of population by age and sex than would otherwise be expected (July 2009 est.)

Peoples concentrated in the Southwest and Northwest Provinces — around Buea and Bamenda — use standard English and Cameroonian Pidgin English, as well as their local languages. In the three northern provinces — Adamawa, North, and Far North — either French or Fulfulde (the language of the Fulani) is widely spoken. Elsewhere, French is the principal second language, although pidgin and some local languages such as Ewondo, the dialect of a Beti clan from the Yaoundé area, have a wide currency.

Indigenous languages of Cameroon include:

Definition: age 15 and over can read and write
Total population: 67.9% (2004 est.; source: UNDP 2006; NB- this figure is given without reference to which languages are considered)