The Permanent Court of Arbitration (PCA), is an international organization based in The Hague in the Netherlands.

The court was established in 1899 as one of the acts of the first Hague Peace Conference, which makes it the oldest institution for international dispute resolution.

As of June 2011, 112 countries are party to one or both of these founding Conventions of the PCA.[1]

Unlike the ICJ, the PCA is not just open to states but also to other parties. The PCA provides services for the resolution of disputes involving various combinations of states, state entities, intergovernmental organizations, and private parties. 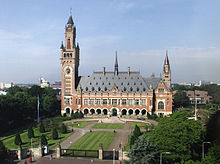 Seat of the PCA: The Peace Palace ("Vredespaleis"), The Hague. 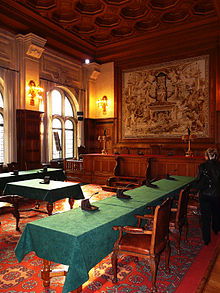 The PCA is not a “court in the conventional understanding of that term, but an administrative organization with the object of having permanent and readily available means to serve as the registry for purposes of international arbitration and other related procedures, including commissions of enquiry and conciliation.”[2] It is a permanent framework available to assist temporary arbitral tribunals or commissions.

The PCA is housed in the Peace Palace in The Hague, which was built specially for the Court in 1913 with an endowment from Andrew Carnegie. From 1922 on, the building also housed the distinctly separate Permanent Court of International Justice, which was replaced by the International Court of Justice in 1946.

In the early 1980s, the PCA helped in setting up the administrative services of the Iran-United States Claims Tribunal.[3]

The public at large is usually more familiar with the International Court of Justice than with the Permanent Court of Arbitration, partly because of the closed nature of cases handled by the PCA and to the low number of cases dealt with between 1946 and 1990. The PCA's caseload has, however, increased since then.[4]

The PCA administers cases arising out of international treaties (including bilateral and multilateral investment treaties), and other agreements to arbitrate. The cases conducted by the PCA span a wide range of legal issues, including disputes over territorial and maritime boundaries, sovereignty, human rights, international investment (investor-state arbitrations), and matters concerning international and regional trade.

Hearings are rarely open to the public and sometimes even the decision itself is kept confidential at the request of the parties. Many decisions and related documents are available on the PCA website.