A mathematical constant is a special number, usually a real number, that is "significantly interesting in some way".[1] Constants arise in many different areas of mathematics, with constants such as e and π occurring in such diverse contexts as geometry, number theory and calculus.

What it means for a constant to arise "naturally", and what makes a constant "interesting", is ultimately a matter of taste, and some mathematical constants are notable more for historical reasons than for their intrinsic mathematical interest. The more popular constants have been studied throughout the ages and computed to many decimal places.

All mathematical constants are definable numbers and usually are also computable numbers (Chaitin's constant being a significant exception).

Common mathematical constants (some of which are also ubiquitous in science)

Ubiquitous in many different fields of science, such recurring constants include e, π and the Feigenbaum constants which are linked to the mathematical models used to describe physical phenomena, Euclidean geometry, analysis and logistic maps respectively. However, mathematical constants such as Apéry's constant and the Golden ratio occur unexpectedly outside of mathematics.

The circumference of a circle with diameter 1 is π.

The constant π has a natural definition in Euclidean geometry (the ratio between the circumference and diameter of a circle), but may also be found in many different places in mathematics: for example the Gaussian integral in complex analysis, nth roots of unity in number theory and Cauchy distributions in probability. However, its universality is not limited to pure mathematics. Indeed, various formulae in physics, such as Heisenberg's uncertainty principle, and constants such as the cosmological constant include the constant π. The presence of π in physical principles, laws and formulae can have very simple explanations. For example, Coulomb's law, describing the inverse square proportionality of the magnitude of the electrostatic force between two electric charges and their distance, states that, in SI units, 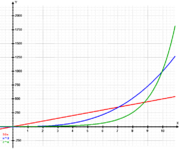 Euler's Number e, also known as the exponential growth constant, appears in many areas of mathematics, and one possible definition of it is the value of the following expression:

For example, the Swiss mathematician Jacob Bernoulli discovered that e arises in compound interest: An account that starts at $1, and yields interest at annual rate R with continuous compounding, will accumulate to eR dollars at the end of one year. The constant e also has applications to probability theory, where it arises in a way not obviously related to exponential growth. Suppose that a gambler plays a slot machine with a one in n probability of winning, and plays it n times. Then, for large n (such as a million) the probability that the gambler will win nothing at all is (approximately) 1/e.

Another application of e, discovered in part by Jacob Bernoulli along with French mathematician Pierre Raymond de Montmort, is in the problem of derangements, also known as the hat check problem.[3] Here n guests are invited to a party, and at the door each guest checks his hat with the butler who then places them into labelled boxes. But the butler does not know the name of the guests, and so must put them into boxes selected at random. The problem of de Montmort is: what is the probability that none of the hats gets put into the right box. The answer is

and as n tends to infinity, pn approaches 1/e.

The Feigenbaum constants α and δ

Bifurcation diagram of the logistic map.

Iterations of continuous maps serve as the simplest examples of models for dynamical systems.[4] Named after mathematical physicist Mitchell Feigenbaum, the two Feigenbaum constants appear in such iterative processes: they are mathematical invariants of logistic maps with quadratic maximum points[5] and their bifurcation diagrams.

The logistic map is a polynomial mapping, often cited as an archetypal example of how chaotic behaviour can arise from very simple non-linear dynamical equations. The map was popularized in a seminal 1976 paper by the English biologist Robert May,[6] in part as a discrete-time demographic model analogous to the logistic equation first created by Pierre François Verhulst. The difference equation is intended to capture the two effects of reproduction and starvation.

Despite being a special value of the Riemann zeta function, Apéry's constant arises naturally in a number of physical problems, including in the second- and third-order terms of the electron's gyromagnetic ratio, computed using quantum electrodynamics.[7] Also, the neuroscientist David Eagleman noted that

where mn,me,φ are the neutron mass, the electron mass and the Golden ratio respectively. 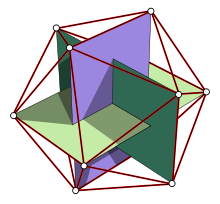 Golden rectangles in an icosahedron

An explicit formula for the nth Fibonacci number involving the golden ratio.

The number φ turns up frequently in geometry, particularly in figures with pentagonal symmetry. Indeed, the length of a regular pentagon's diagonal is φ times its side. The vertices of a regular icosahedron are those of three mutually orthogonal golden rectangles. Also, it appears in the Fibonacci sequence, related to growth by recursion.[9] It is approximately equal to 1.61803398874, or, more precisely

Adolf Zeising, whose main interests were mathematics and philosophy, found the golden ratio expressed in the arrangement of branches along the stems of plants and of veins in leaves. He extended his research to the skeletons of animals and the branchings of their veins and nerves, to the proportions of chemical compounds and the geometry of crystals, even to the use of proportion in artistic endeavours. In these phenomena he saw the golden ratio operating as a universal law.[10] Zeising wrote in 1854:

[The Golden Ratio is a universal law] in which is contained the ground-principle of all formative striving for beauty and completeness in the realms of both nature and art, and which permeates, as a paramount spiritual ideal, all structures, forms and proportions, whether cosmic or individual, organic or inorganic, acoustic or optical; which finds its fullest realization, however, in the human form.[11]

The area between the two curves (red) tends to a limit.

Conway's constant is the invariant growth rate of all derived strings similar to the look-and-say sequence (except two trivial ones).[12] It is given by the unique positive real root of a polynomial of degree 71 with integer coefficients.[13]

If a real number r is written as a simple continued fraction:

where ak are natural numbers for all k

then, as the Russian mathematician Aleksandr Khinchin proved in 1934, the limit as n tends to infinity of the geometric mean: (a1a2...an)1/n exists and is a constant, Khinchin's constant, except for a set of measure 0.[14][15]

Simple representatives of sets of numbers

This Babylonian clay tablet gives an approximation of the square root of 2 in four sexagesimal figures, which is about six decimal figures.[16]

Liouville's constant is a simple example of a transcendental number.

Some constants, such as the square root of 2, Liouville's constant and Champernowne constant:

are not important mathematical invariants but retain interest being simple representatives of special sets of numbers, the irrational numbers,[17] the transcendental numbers[18] and the normal numbers (in base 10)[19] respectively. The discovery of the irrational numbers is usually attributed to the Pythagorean Hippasus of Metapontum who proved, most likely geometrically, the irrationality of the square root of 2. As for Liouville's constant, named after French mathematician Joseph Liouville, it was the first number to be proven transcendental.[20]

In the computer science subfield of algorithmic information theory, Chaitin's constant is the real number representing the probability that a randomly chosen Turing machine will halt, formed from a construction due to Argentine-American mathematician and computer scientist Gregory Chaitin. Chaitin's constant, though not being computable, has been proven to be transcendental and normal. Chaitin's constant is not universal, depending heavily on the numerical encoding used for Turing machines; however, its interesting properties are independent of the encoding.

When unspecified, constants indicate classes of similar objects, commonly functions, all equal up to a constant—technically speaking, this is may be viewed as 'similarity up to a constant'. Such constants appear frequently when dealing with integrals and differential equations. Though unspecified, they have a specific value, which often isn't important. 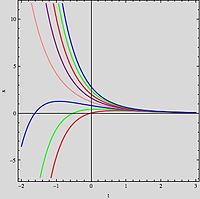 Solutions with different constants of integration of

Indefinite integrals are called indefinite because their solutions are only unique up to a constant. For example, when working over the field of real numbers

where C, the constant of integration, is an arbitrary fixed real number.[21] In other words, whatever the value of C, differentiating sin x + C with respect to x always yields cos x.

When dealing with partial differential equations, the constants may be functions, constant with respect to some variables (but not necessarily all of them). For example, the PDE

has solutions f(x,y)=C(y), where C(y) is an arbitrary function in the variable y.

It is common to express the numerical value of a constant by giving its decimal representation (or just the first few digits of it). For two reasons this representation may cause problems. First, even though rational numbers all have a finite or ever-repeating decimal expansion, irrational numbers don't have such an expression making them impossible to completely describe in this manner. Also, the decimal expansion of a number is not necessarily unique. For example, the two representations 0.999... and 1 are equivalent[22][23] in the sense that they represent the same number.

Calculating digits of the decimal expansion of constants has been a common enterprise for many centuries. For example, German mathematician Ludolph van Ceulen of the 16th century spent a major part of his life calculating the first 35 digits of pi.[24] Using computers and supercomputers, some of the mathematical constants, including π, e, and the square root of 2, have been computed to more than one hundred billion digits. Fast algorithms have been developed, some of which — as for Apéry's constant — are unexpectedly fast.

Some constants differ so much from the usual kind that a new notation has been invented to represent them reasonably. Graham's number illustrates this as Knuth's up-arrow notation is used.[25][26]

It may be of interest to represent them using continued fractions to perform various studies, including statistical analysis. Many mathematical constants have an analytic form, that is they can constructed using well-known operations that lend themselves readily to calculation. Not all constants have known analytic forms, though; Grossman's constant[27] and Foias' constant[28] are examples.

Symbolizing and naming of constants

Symbolizing constants with letters is a frequent means of making the notation more concise. A standard convention, instigated by Leonhard Euler in the 18th century, is to use lower case letters from the beginning of the Latin alphabet

or the Greek alphabet

when dealing with constants in general.

Examples of different kinds of notation for constants.

However, for more important constants, the symbols may be more complex and have an extra letter, an asterisk, a number, a lemniscate or use different alphabets such as Hebrew, Cyrillic or Gothic.[26]

The universal parabolic constant is the ratio, for any parabola, of the arc length of the parabolic segment (red) formed by the latus rectum (blue) to the focal parameter (green).

The names are either related to the meaning of the constant (universal parabolic constant, twin prime constant, ...) or to a specific person (Sierpiński's constant, Josephson constant, ...).