Thracian clothing refers to types of clothing worn mainly by Thracians, Dacians[1] but also by some Greeks.[2] Its best literal descriptions are given by Herodotus and Xenophon in his Anabasis.[1] Depictions are found in a great number of Greek vases and there are a few Persian representations as well. In contrast to shapes and patterns we have very little evidence on the colours used.

The Thracians wore a tunic, a cloak called zeira (Ancient Greek: ζείρα), a cap called Alopekis (Ancient Greek: Αλωπεκίς) made from the scalp of a fox with the ears visible,[1] other Phrygian cap styles, and fawnskin boots called embades (Ancient Greek: Εμβάδες). Thracian clothing was sometimes decorated with intricate patterns. While patterned clothing was not unique to Thracians, the zeira, embades and the alopekis probably originated from them.[citation needed] Clothing was made from hemp, flax or wool.[3] The Dacians and the Getae wore pantaloons called Bracae[4] (Ancient Greek,"ἀναξυρίδες" or "θύλακοι").These loose pants were described in Euripides work as “variegated bags” (Ancient Greek,"τοὺς θυλάκους τοὺς ποικίλους") and may have appeared highly ridiculous to the Greeks, although Ovid mentions the adoption of them by the descendants of some of the Greek colonists on the Euxine.These trousers were common in many nations. 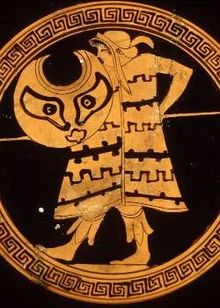 In the north only noble Thracians, the "Zibythides" and noble Dacians, the "Pileati", would wear caps.[1] Despite this Herodotus writes that all Thracians in the Persian army wore foxskin caps and multicoloured mantles. Northern tribes in general, both Thracians and Daco-Getians, wore clothes similar to Scythians.[1]

The Thracians at Pydna in 168 BC wore black tunics. The Kausia (Ancient Greek: Καυσία) was adopted from the Macedonians[5] and Greek clothing replaced the old Thracian garbs until the Thracians looked like Greeks.[6]

Media related to Costume in Ancient Greece at Wikimedia Commons