The Marcomannic Wars (called by the Romans bellum Germanicum[1] or expeditio Germanica) were a series of wars lasting over a dozen years from about AD 166 until 180. These wars pitted the Roman Empire against the Marcomanni, Quadi and other Germanic peoples, along both sides of the upper and middle Danube. The struggle against the Germanic invasions occupied the major part of the reign of Roman emperor Marcus Aurelius, and it was during his campaigns against them that he started writing his philosophical work Meditations, whose first book bears the note "Among the Quadi at the Granua".[2] 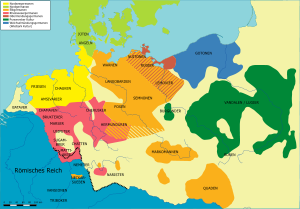 The Germanic tribes of Central Europe in the mid-1st century. The Marcomanni and the Quadi are in the area of modern Bohemia.

During the years succeeding the rule of Antoninus Pius, the Roman Empire began to be attacked upon all sides. A war with Parthia lasted from 161 to 166 (under the joint rule of Marcus Aurelius and Lucius Verus), and although it ended successfully, its unforeseen consequences for the Empire were great. The returning troops brought with them a plague (the so-called Antonine Plague), which would eventually kill an estimated 5 million people,[3] severely weakening the Empire. At the same time, in Central Europe, the first movements of the Great Migrations were occurring, as the Goths moved westwards, putting pressure on the Germanic tribes of the area. As a result, Germanic tribes and other nomadic people launched raids along Rome's northern border, particularly into Gaul and across the Danube.

Beginning in 162 and continuing until 165, an invasion of Chatti and Chauci in the provinces of Raetia and Germania Superior was repulsed. In late 166 or early 167, a force of 6,000 Langobardi, Ubii and Lacringi invaded Pannonia. This invasion was defeated by local forces (vexillations of the Legio I Adiutrix commanded by Candidus and the Ala I Ulpia Contariorum commanded by Vindex) with relative ease, but they marked the beginning of what was to come. In their aftermath, the military governor of Pannonia, Marcus Iallius Bassus, initiated negotiations with 11 tribes.[4] In these negotiations, the Marcomannic king Ballomar, a Roman client, acted as a mediator. In the event, a truce was agreed upon and the tribes withdrew from Roman territory, but no permanent agreement was reached. In the same year, Vandals (Astingi and Lacringi) and the Sarmatian Iazyges invaded Dacia, and succeeded in killing its governor, Calpurnius Proculus. To counter them, Legio V Macedonica, a veteran of the Parthian campaign, was moved from Moesia Inferior to Dacia Superior, closer to the enemy.

During that time, as plague was ravaging the empire, Marcus Aurelius was unable to do more, and the punitive expedition he was planning to lead in person was postponed until 168. In the spring of that year, Marcus Aurelius, together with Lucius Verus set forth from Rome, and established their headquarters at Aquileia. The two emperors supervised a reorganization of the defences of Italy and the Illyricum, raised two new legions, Legio II Italica and Legio III Italica, and crossed the Alps into Pannonia. The Marcomanni and the Victuali had crossed the Danube into the province, but, at least according to the Historia Augusta, the approach of the imperial army to Carnuntum was apparently sufficient to persuade them to withdraw and offer assurances of good conduct. The two emperors returned to Aquileia for the winter, but on the way, in January 169, Lucius Verus died.[5] Marcus returned to Rome to oversee his co-emperor's funeral. 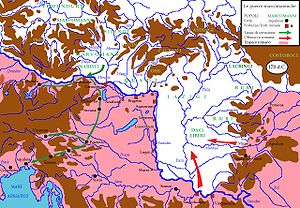 The Roman expedition against the Iazyges in the eastern Pannonian Plain and the great Marcomannic invasion of 170.

In the autumn of 169, Marcus set out from Rome, together with his son-in-law Claudius Pompeianus, who would become his closest aide during the war. The Romans had gathered their forces and intended to subdue the independent tribes (especially the Iazyges), who lived between the Danube and the Roman province of Dacia. The Iazyges defeated and killed Claudius Fronto, Roman governor of Lower Moesia. However, while the Roman army was entangled in this campaign, making little headway, several tribes used the opportunity to cross the frontier and raid Roman territory.

To the east, the Costoboci crossed the Danube, ravaged Thrace and descended the Balkans, reaching Eleusis, near Athens, where they destroyed the temple of the Eleusian Mysteries.

The most important and dangerous invasion however, was that of the Marcomanni in the west. Their leader, Ballomar, had formed a coalition of Germanic tribes. They crossed the Danube and won a decisive victory over a force of 20,000 Roman soldiers near Carnuntum. Ballomar then led the larger part of his host southwards towards Italy, while the remainder ravaged Noricum. The Marcomanni razed Opitergium (Oderzo) and besieged Aquileia. This was the first time hostile forces had entered Italy since 101 BC, when Gaius Marius defeated the Cimbri and Teutones. The army of praetorian prefect Furius Victorinus tried to relieve the city, but was defeated and its general slain.

The Roman counter-offensive and defeat of the Marcomanni 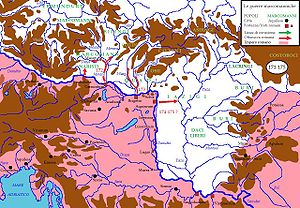 The Roman counter-offensive across the Danube

This disaster forced Marcus to re-evaluate his priorities. Forces from the various frontiers were dispatched against Ballomar. They came under the command of Claudius Pompeianus, with the future emperor Pertinax as one of his lieutenants. A new military command, the praetentura Italiae et Alpium was established to safeguard the roads into Italy, and the Danubian fleet was strengthened. Aquileia was relieved, and by the end of 171, the invaders had been evicted from Roman territory. Intense diplomatic activity followed, as the Romans tried to win over various barbarian tribes in preparation for a crossing of the Danube. A peace treaty was signed with the Quadi and the Iazyges, while the tribes of the Hasdingi Vandals and the Lacringi became Roman allies.

The "Miracle of the Rain", from the Aurelian column. An unidentified "rain god" (top right) saves the Roman army.

In 172, the Romans crossed the Danube into Marcomannic territory. Although few details are known, the Romans achieved success, subjugating the Marcomanni and their allies, the Varistae or Naristi and the Cotini. This fact is evident from the adoption of the title "Germanicus" by Marcus Aurelius, and the minting of coins with the inscription "Germania capta" ("subjugated Germania"). During this campaign, the chief of the Naristi was killed by the Roman General Marcus Valerius Maximianus.

In 173, the Romans campaigned against the Quadi, who had broken their treaty and assisted their kin, and defeated and subdued them. During this campaign, a famous incident, the so-called "miracle of the rain", occurred, which was later depicted on the column of Marcus Aurelius and on coins. According to Cassius Dio, the legio XII Fulminata was hemmed in by a superior Quadi force and almost forced to surrender because of the heat and thirst. They were saved, however, by a sudden shower, which refreshed the Romans, while lightning struck the Quadi.[6] Contemporaries and historians attributed it to divine intervention: Dio claimed that it was called by an Egyptian magician praying to Mercury, while Christian writers such as Tertullian attributed it to a prayer by Christians.

In the same year, Didius Iulianus, the commander of the Rhine frontier, repelled another invasion of the Chatti and the Hermunduri, while the Chauci raided the shoreline of Gallia Belgica.

In the next year, the Romans marched against the Quadi, whereupon the Quadi deposed their pro-Roman king, Furtius, and installed his rival, Ariogaesus, in his place. Marcus Aurelius refused to recognize him, and turning back, deposed and exiled him to Alexandria.[7] Thus, by late 174, the subjugation of the Quadi was complete. In typical Roman fashion, they were forced to surrender hostages and provide auxiliary contingents for the Roman army, while garrisons were installed throughout their territory.

After this, the Romans focused their attention on the Iazyges living in the plain of the river Tisza (expeditio sarmatica). After a few victories, in 175, a treaty was signed. According to its terms, the Iazyges King Zanticus delivered 100,000 Roman prisoners and, in addition, provided 8,000 auxiliary cavalrymen, most of whom (5,500) were sent to Britain.[8][9] Upon this, Marcus assumed the victory title "Sarmaticus".

Marcus Aurelius may have intended to campaign against the remaining tribes, and together with his recent conquests establish two new Roman provinces, Marcomannia and Sarmatia, but whatever his plans, they were cut short by the rebellion of Avidius Cassius in the East.[10]

Marcus Aurelius marched eastwards with his army, accompanied by auxiliary detachments of Marcomanni, Quadi and Naristi under the command of Marcus Valerius Maximianus. After the successful suppression of Cassius' revolt, the emperor returned to Rome for the first time in nearly 8 years. On 23 December 176, together with his son Commodus, he celebrated a joint triumph for his German victories ("de Germanis" and "de Sarmatis"). In commemoration of this, the Aurelian Column was erected, in imitation of Trajan's Column. 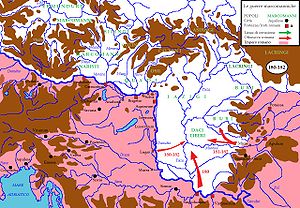 The respite was to be brief. In 177, the Quadi rebelled, followed soon by their neighbours, the Marcomanni and Marcus Aurelius once again headed north, to begin his second Germanic campaign (secunda expeditio germanica). He arrived at Carnuntum in August 178, and set out to quell the rebellion in a repeat of his first campaign, moving first against the Marcomanni, and in 179-180 against the Quadi. Under the command of Marcus Valerius Maximianus, the Romans fought and prevailed against the Quadi in a decisive battle at Laugaricio near (modern Trenčín, Slovakia). The Quadi were chased westwards, deeper into Greater Germania, where the praetorian prefect Tarutenius Paternus later achieved another decisive victory against them, but on 17 March 180, the emperor died at Vindobona (modern Vienna).

His successor Commodus had little interest in pursuing the war. Against the advice of his senior generals, after negotiating a peace treaty with the Marcomanni and the Quadi, he left for Rome in early autumn 180, where he celebrated a triumph on October 22. Nevertheless, operations continued against the Iazyges, the Buri and the so-called "free Dacians" living between the Danube and Roman Dacia. Not much is known about this war, except that the Roman generals included Marcus Valerius Maximianus, Pescennius Niger and Clodius Albinus. At any rate, the victories they achieved were deemed sufficient for Commodus to claim the title "Germanicus Maximus" in mid-182.

The war had exposed the weakness of Rome's northern frontier, and henceforth, half of the Roman legions (16 out of 33) would be stationed along the Danube and the Rhine. For the Germanic tribes, although for the moment checked, the Marcomannic wars were only the prelude of the great invasions that would eventually disassemble and end the Western Roman Empire in the 4th and 5th centuries.

Two films, the 1964 The Fall of the Roman Empire, and the 2000 Gladiator start with a fictional account of a final battle of the Marcomannic Wars.

This article incorporates information from the revision as of September 3, 2007 of the equivalent article on the Italian Wikipedia.