Aquileia (Friulian: Acuilee/Aquilee/Aquilea, Slovene: Oglej) is an ancient Roman city in what is now Italy, at the head of the Adriatic at the edge of the lagoons, about 10 km from the sea, on the river Natiso (modern Natissa), the course of which has changed somewhat since Roman times. Today, the city is small (about 3500 inhabitants), but it was large and prominent in Antiquity, and is one of the main archeological sites of Northern Italy. 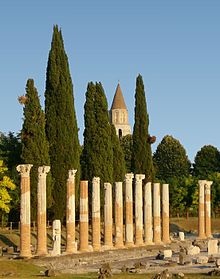 A view of the archaeological area of Aquileia.

Aquileia was founded as a colony by the Romans in 180/181 BC along the Natissa River, on land south of the Julian Alps but about 8 miles north of the lagoons. Presumably named from an indigenous word Akylis, the colony served as a frontier fortress at the north-east corner of transpadane Italy and was intended to protect the Veneti, faithful Roman allies, during the Illyrian Wars and act as a buttress to check the advance of other warlike people, such as the hostile Carni and Histri tribes. In fact, Aquileia was founded on a site not far from where Gaulish invaders had attempted to settle in 183 BC.

The colony was established with Latin rights by the triumvirate of Publius Cornelius Scipio Nasica, Caius Flaminius, and Lucius Manlius Acidinus, two of whom were of consular and one of praetorian rank. They led 3,000 pedites (infantry), mainly from Samnium, who with their families formed the bulk of the settlers and were soon supplemented by native Veneti. It is likely that Aquileia had been a center of Venetia even before the coming of the Romans. And Aquileia's strategic military position also served to promote the Venetic trade in amber imported from the Baltic.

Aquileia was connected by road with Bologna probably in 173 BC; and subsequently with Genoa in 148 BC by the Via Postumia, which ran through Cremona, Bedriacum and Altinum, joining the first-mentioned road at Concordia, while the construction of the Via Popilia from Rimini to Ad Portum near Altinum in 132 BC improved the communications still further.

In 169 BC, 1,500 more Latin colonists with their families were settled in the town as a reinforcement to the garrison. The discovery of the gold fields near the modern Klagenfurt in 130 BC[1] brought it into notice, and it soon became a place of importance, not only owing to its strategic position, but as a centre of trade, especially in agricultural products and viticulture. It also had, in later times at least, considerable brickfields.

The original Latin colony became a municipium probably in 90 BC. Citizens were ascribed to the Roman tribe Velina. The customs boundary of Italy was close by in Cicero's day. It was plundered by the Iapydes under Augustus, but, in the period of peace which followed, was able to develop its resources. Augustus visited it during the Pannonian wars in 12‑10 BC and it was the birthplace of Tiberius' son by Julia, in the latter year.

It was the starting-point of several important roads leading to the north-eastern portion of the empire — the road (Via Iulia Augusta) by Iulium Carnicum to Veldidena (mod. Wilten, near Innsbruck), from which branched off the road into Noricum, leading by Virunum (Klagenfurt) to Laurieum (Lorch) on the Danube, the road into Pannonia, leading to Aemona (Ljubljana) and Sirmium (Sremska Mitrovica), the road to Tarsatica (near Fiume, now Rijeka) and Siscia (Sisak), and that to Tergeste (Trieste) and the Istrian coast.

Besides natives of Italy, Celts, Illyrians, Greeks, Egyptians, Jews, and Syrians all settled in the city and contributed to its commercial development. Jewish artisans established a flourishing trade in glasswork. Metal from Noricum was forged and exported. The ancient Venetic trade in amber from the Baltic was continued. Wine, especially its famous Pucinum was exported. Oil was imported from Proconsular Africa.

In terms of religion, the Roman pantheon was adopted although a native sungod, Belenus, had a large following. Jews practiced their ancestral religion and it was perhaps some of these Jews who became the first Christians. Meanwhile, soldiers brought the martial cult of Mithras.

In the war against the Marcomanni in 167, the town was hard pressed; its fortifications had fallen into disrepair during the long peace. Nevertheless, when in 168 Marcus Aurelius made Aquileia the principal fortress of the empire against the barbarians of the North and East, it rose to the pinnacle of its greatness and soon had a population of 100,000. In 238, when the town took the side of the Senate against the Emperor Maximinus Thrax, the fortifications were hastily restored, and proved of sufficient strength to resist for several months, until Maximinus himself was assassinated.

Roman Emperor Flavius Victor on this as struck in Aquileia mint.

During the 4th century, Aquileia maintained its importance. Constantine sojourned there on numerous occasions. It became a naval station and the seat of the Corrector Venetiarum et Histriae; a mint was established, of which the coins were very numerous, and the bishop obtained the rank of metropolitan archbishop. A council held in the city in 381 was only the first of a series of Councils of Aquileia that have been convened over the centuries.

An imperial palace was constructed here, in which the emperors after the time of Diocletian frequently resided; and the city often played a part in the struggles between the rulers of the 4th century. In 340, Emperor Constantine II was killed under its walls while attempting to take the city from his younger brother Constans.

At the end of the 4th century, Ausonius, enumerated Aquileia as the ninth among the great cities of the world, placing Rome, Mediolanum, Constantinople, Carthage, Antioch, Alexandria, Trier, and Capua before it. However, such prominence made it a target and it was besieged by Alaric and the Visigoths in 401, during which time some of its residents fled to the nearby lagoons. It was again unsuccessfully attacked in 408 by Attila, who returned in 452. During this second invasion, the city was so utterly destroyed by Attila and his Huns that it was afterwards hard to recognize its original site. the fall of Aquileia was the first of Attila's incursions into Roman territory, followed by cities like Mediolanum and Ticinum.[2] The Roman inhabitants, together with those of smaller towns in the neighborhood, fled en masse to the lagoons, and so laid the foundations of the cities of Venice and nearby Grado.

Yet Aquileia would rise again, though much diminished, and continue to exist until the Lombard invasion of 568. It was once more destroyed (590) by the Lombards. Meanwhile, the patriarch fled to the island town of Grado, which was under the protection of the Byzantines. When the patriarch residing in Grado was reconciled with Rome in 606, those continuing in the Schism of the Three Chapters, rejecting the Second Council of Constantinople, elected a patriarch at Aquileia. Thus, the diocese was essentially divided into two parts, with the mainland patriarchate of Aquileia under the protection of the Lombards, and the insular patriarchate of Aquileia seated in Grado being protected by the exarchate of Ravenna and later the Doges of Venice, with the collusion of the Lombards. The line of the patriarchs elected in Aquileia would continue in schism until 699. However, although they kept the title of patriarch of Aquileia, they moved their residence first to Cormons and later to Cividale.

Patriarchate of Aquileia in a 1350 map.

The Lombard Dukes of Friuli ruled Aquileia and the surrounding mainland territory from Cividale. In 774, Charlemagne conquered the Lombard duchy and made it into a Frankish one with Eric of Friuli as duke. In 787, Charlemagne named the priest and master of grammar at the Palace School Paulinus the new patriarch of Aquileia. Although Paulinus resided mainly at Cividale, his successor Maxentius considered rebuilding Aquileia. However, the project never came to fruition.

While Maxentius was patriarch, the pope approved the Synod of Mantua, which affirmed the precedence of the mainland patriarch of Aquileia over the patriarch of Grado. However, material conditions were soon to worsen for Aquileia. The ruins of Aquileia were continually pillaged for building material. And with the collapse of the Carolingians in the 10th century, the inhabitants would suffer under the raids of the Magyars.

By the 11th century, the patriarch of Aquileia had grown strong enough to assert temporal sovereignty over Friuli and Aquileia. The Holy Roman Emperor gave the region to the patriarch as a feudal possession. However, the patriarch's temporal authority was constantly disputed and assailed by the territorial nobility.

In 1027 and 1044 Patriarch Poppo of Aquileia, who rebuilt the cathedral of Aquileia, entered and sacked neighboring Grado, and, though the Pope reconfirmed the Patriarch of the latter in his dignities, the town never fully recovered, though it continued to be the seat of the Patriarchate until its formal transference to Venice in 1450.

In the 14th century the Patriarchate reached its biggest extension, stretching from the Piave river to the Julian Alps and northern Istria. The seat of the Patriarchate of Aquileia had been transferred to Udine in 1238, but returned to Aquiliea in 1420 when Venice annexed the territory of Udine.

In 1445, the defeated patriarch Ludovico Trevisan acquiesced in the loss of his ancient temporal estate in return for an annual salary of 5,000 ducats allowed him from the Venetian treasury. Henceforth only Venetians were allowed to hold the title of Patriarch of Aquileia. The Patriarchate was incorporated in the Republic of Venice with the name of Patria del Friuli, ruled by a General Proveditor or a "Luogotenente" living in Udine.

It was finally officially suppressed in 1751, and the sees of Udine and Gorizia (Görz) established in its stead. 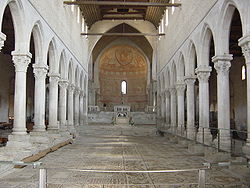 Interior of the Cathedral, with the mosaic pavement. 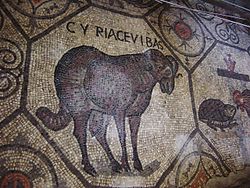 Ancient mosaic in the Cathedral. 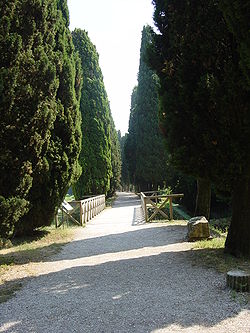 The Cathedral of Aquileia is a flat-roofed basilica erected by Patriarch Poppo in 1031 on the site of an earlier church, and rebuilt about 1379 in the Gothic style by Patriarch Marquard of Randeck.

The façade, in Romanesque-Gothic style, is connected by a portico to the so-called Church of the Pagans, and the remains of the 5th century Baptistry. The interior has a nave and two aisles, with a noteworthy mosaic pavement from the 4th century. The wooden ceiling is from 1526, while the fresco decoration belongs to various ages: from the 4th century in the St. Peter's chapel of the apse area; from the 11th century in the apse itself; from the 12th century in the so-called "Crypt of the Frescoes", under the presbytery, with a cycle depicting the origins of Christianity in Aquileia and the history of St. Hermagoras, first bishop of the city.

Next to the 11th century Romanesque chapel of the Holy Sepulchre, at the beginning of the left aisle, flooring of different ages can be seen: the lowest is from a Roman villa of the age of Augustus; the middle one has a typical cocciopesto pavement; the upper one, bearing blackening from the Attila's fire, has geometrical decorations.

Externally, behind the 9th century campanile and the apse, is the Cemetery of the Fallen, where ten unnamed soldiers of World War I are buried. Saint Hermangoras is also buried there.

The ancient buildings of Aquileia served as stone quarries for centuries, and no edifices of the Roman period remain above ground. Excavations have revealed one street and the north-west angle of the town walls, while the National Archaeological Museum (one of the most important museums of Ancient Rome in the world) contains over 2,000 inscriptions, statues and other antiquities, as well as glasses of local production and a numismatics collection.

The site of Aquileia, believed to be the largest Roman city yet to be excavated, is inscribed on the UNESCO World Heritage List.

In the Monastero fraction is a 5th century Christian basilica, later a Benedictine monastery, which today houses the Paleo-Christian Museum.