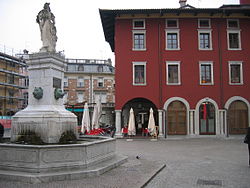 Cividale del Friuli (Friulian: Cividât, Slovene: Čedad, German: Östrich) is a town and comune in Friuli-Venezia Giulia, Northern Italy, 15 km by rail from Udine, whose province it belongs to. The town is in the foothills of the eastern Alps close to the Slovenian border, 135 m above sea-level. It is situated on the river Natisone, which forms a picturesque ravine here. Formerly an important regional power, it is today a quiet, small town that attracts tourists thanks to its medieval center.

Cividale was founded as a Roman municipium by Julius Caesar in 50 BCE on the newly built Via Julia Augusta, with the name of Forum Iulii ("Julius' Forum"; Fréjus had the same Roman name). Archaeological findings have revealed that the area was already settled by Veneti and Celts. After the destruction of Aquileia and Iulium Carnicum (Zuglio), it became the chief town of the district of Friuli and gave its name to it.

In 568 the city was the first major centre occupied by Alboin's Lombard invasion of Italy, then part of the Byzantine Empire. The city was chosen as first capital of the newly formed Lombard Kingdom, then granted by Alboin to his nephew Gisulf as the capital of a Lombard Duchy of Friuli. After the Lombards were defeated by the Franks, (774), following the last Lombard resistance under Hrodgaud of Friuli (776) Forum Julii changed its name to Civitas Austriae, Charlemagne's Italian "City of the East".

Under the Carolingian settlement with the Papacy, the patriarchs of Aquileia resided here from 773 to 1031, when they returned to Aquileia, and finally in 1238 removed to Udine. This last change of residence was the origin of the antagonism between Cividale and Udine, which was only terminated by their surrender to Venice in 1419 and 1420 respectively. When the Patriarchal State of Friuli was founded in 1077, Cividale was chosen as the capital.

In 1420 Cividale was annexed to the Republic of Venice.

After the Napoleonic Wars parenthesis, Cividale became part of the Lombard-Venetian Kingdom. It was ceded to Kingdom of Italy in 1866.

The historical center of the town is dominated by Piazza del Duomo, which is where the National Archeological Museum is located. Close by is the Palazzo dei Provveditori Veneti, constructed in 1565 and designed by Andrea Palladio. The town is split in two by the Natisone River, which is spanned by the impressive Devil's Bridge (15th century, rebuilt in 1918). Also notable is the Celtic Hypogeum, a subterranean series of halls carved in the rock in ancient times, whose destination remains unclear: uses as either Celtic funerary monument or a Roman (Lombard) jail has been proposed.

The Cathedral (Duomo) was built in the 15th century over a pre-existing construction built in the 8th century. It is a Venetian Gothic building, finished in the 16th century by architect Pietro Lombardo, featuring interventions from the 18th century also. The interior houses a notable altar dedicated to the Madonna, in the right aisle, and the Silver Pale (altarpiece) of Pellegrino II, patriarch from 1195 to 1204. The Christian Museum annexed to the Duomo houses outstanding examples of Lombard sculpture. It contains some interesting relics of the art of the 8th century. The cathedral contains an octagonal marble canopy with sculptures in relief, with a font below it belonging to the 8th century, but altered later. The high altar has a fine silver altar front of 1185. The museum contains various Roman and Lombard antiquities, and works of art in gold, silver and ivory formerly belonging to the cathedral chapter. The fine 15th-century Ponte del Diavolo leads to the church of S. Martino, which contains an altar of the 8th century with reliefs executed by order of the Lombard king Ratchis.

The small church of Oratorio di Santa Maria in Valle (also known as Lombard Temple), next to the Natisone river, is a notable example of High Middle Ages art sometimes attributed to the 8th century, but probably later. Included in the old Lombard quarter, it was probably used as Palatine Chapel by the Lombard dukes and king's functionaries. The fine decorations, statues and stuccoes (11th or 12th century) housed in the interior, show a strong Byzantine influence.

In the collegiata, there is a silver retable from the time of patriarch Pelegrinus II (1195−1204) which had been inscribed in Latin by the means of individual letter punches, 250 years before the invention of modern movable type printing by Johannes Gutenberg.[1] According to Lipinsky, the Venetian artisan may have been inspired by Byzantine relic boxes which were decorated by the same technique between the 10th and 12th century.[2]

The town has a number of small osterias which serve distinctive local wines. Of particular note are Tocai friulano, Verduzzo and Refosco dal peduncolo rosso.

The town is easily accessible by rail and bus from Udine and by bus from Gorizia.

At Cividale were born Paulus Diaconus, the historian of the Lombards in the time of Charlemagne, and the actress Adelaide Ristori (1822–1906).