List of sovereign states and dependent territories in Oceania

List of sovereign states and dependent territories in Oceania 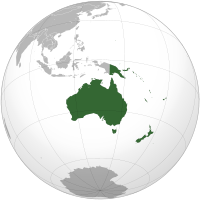 Geopolitical Oceania in green. Smaller islands are not visible

This is a list of sovereign states and dependent territories in Oceania. Although it is mostly ocean and spans many continental plates, Oceania is often defined as a continent. This list follows the boundaries of geopolitical Oceania, which includes Melanesia, Micronesia, Polynesia, and Australasia. The main continental landmass of Oceania is Australia,[1] with the second largest being Zealandia.

The division between Asia and Oceania is not clearly defined. The Malay Archipelago is sometimes included in a wider geographical definition of Oceania. By two other common divisions, due to the cultural Melanesian line and the ecological Wallace Line, the eastern half of Indonesia and East Timor are sometimes considered to be part of Oceania while the rest of the archipelago is in Asia. For political reasons, the United Nations considers the border is between the two regions to be the Indonesian–Papua New Guineaian border.[2] Papua New Guinea is occasionally considered Asian due to its virtue of neighbouring Indonesia, but this is rare, and it is generally accepted to be part of Oceania. If the entire Malay archipelago is included as part of Oceania, then Malaysia, Singapore, Brunei, Indonesia, the Philippines, and East Timor are also included.

The following is a list of sovereign states which are usually considered to be Oceanian, and whom all have their capital city in Oceania. Of these, only Australia and New Zealand have territory outside of Oceania. All of these states are members of the Pacific Islands Forum except Fiji, which is suspended.

The following are external territories considered to be within Oceania but are not considered sovereign states. It includes various political and administrative divisions, as well as dependencies.

The following are incorporated parts of a non-Oceanian state.