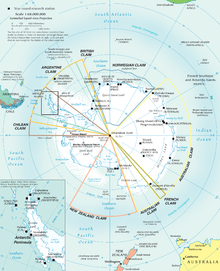 Seven states maintain a territorial claim on eight territories in Antarctica. These countries have tended to site their scientific observation and study facilities in Antarctica within their claimed territory.

It is sometimes said that the Antarctic Treaty defers or suspends these claims. However, Article IV(2) states that it does not affect (neither confirm not deny) existing claims: “No acts or activities taking place while the present Treaty is in force shall constitute a basis for asserting, supporting or denying a claim to territorial sovereignty in Antarctica. No new claim, or enlargement of an existing claim, to territorial sovereignty shall be asserted while the present Treaty is in force.”

Seven sovereign states had made eight territorial claims to land in Antarctica below the 60° S parallel before 1961. These claims have been recognized only between the countries making claims in the area. All claim areas are sectors, with the exception of Peter I Island. None of these claims has an indigenous population. The South Orkney Islands fall within the territory claimed by Argentina and United Kingdom; and the South Shetland Islands fall within the areas claimed by Argentina, Chile, and the United Kingdom. The UK, France, Australia, New Zealand and Norway all recognize each others' claims,[1] which do not overlap. Prior to 1962, British Antarctic Territory was a dependency of the Falkland Islands and also included South Georgia and the South Sandwich Islands. The Antarctic areas became a separate overseas territory following the ratification of the Antarctic Treaty. South Georgia and the South Sandwich Islands remained a dependency of the Falkland Islands until 1985 when they too became a separate overseas territory.

There have been speculation about possible future claims. The US and Russia (as successor state of the Soviet union) have claimed to have reserved rights on claim and there have also been speculations on Brazil making a claim bounded by 53° W and 28° W,[2] overlapping thus with the Argentine and British claims but not with the Chilean.

Four island territories located north of the 60° South circle of latitude are sometimes associated with the continent of Antarctica. None of these territories has an indigenous population. 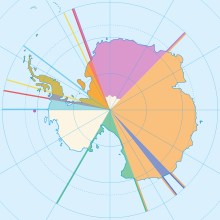 The Antarctic Treaty and related agreements regulate international relations with respect to Antarctica, Earth's only continent without a native human population. The treaty has now been signed by 46 countries, including the United Kingdom, the United States, and the now-defunct Soviet Union. The treaty set aside Antarctica as a scientific preserve, established freedom of scientific investigation and banned military activity on that continent. This was the first arms control agreement established during the Cold War. The Soviet Union and the United States both filed reservations against the restriction on new claims, and the United States and Russia assert their right to make claims in the future if they so choose. Brazil maintains the Comandante Ferraz (the Brazilian Antarctic Base) and has proposed a theory to delimiting territories using meridians, which would give it and other countries a claim. In general, territorial claims below the 60° S parallel have only been recognised among those countries making claims in the area. However, claims are often indicated on maps of Antarctica - this does not signify de jure recognition.

All claim areas except Peter I Island are sectors, the borders of which are defined by degrees of longitude. In terms of latitude, the northern border of all sectors is the 60° S parallel which does not cut through any piece of land, continent or island, and is also the northern limit of the Antarctic Treaty. The southern border of all sectors collapses in one point, the South Pole. Only the Norwegian sector is an exception: the original claim of 1930 did not specify a northern or a southern limit, so that its territory is only defined by eastern and western limits.[5]

The Antarctic Treaty states that contracting to the treaty:

What the treaty does affect are new claims: