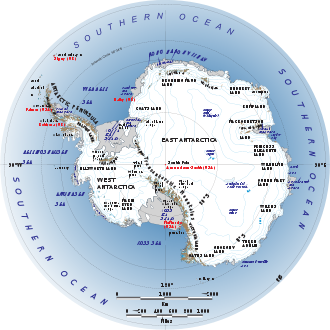 Eastern Antarctica on the right.

Image of a variety of ice types off the coast of East Antarctica.

East Antarctica, also called Greater Antarctica, constitutes the majority (two-thirds) of the Antarctic continent, lying on the Indian Ocean side of the Transantarctic Mountains. It is the coldest, windiest, driest and most isolated land mass on Earth, and includes a number of high mountains.

Almost completely covered in thick, permanent ice, East Antarctica comprises Coats Land, Queen Maud Land, Enderby Land, Kemp Land, Mac. Robertson Land, Princess Elizabeth Land, Wilhelm II Land, Queen Mary Land, Wilkes Land, Adélie Land, George V Land, Oates Land and Victoria Land. All but a small portion of this region lies within the Eastern Hemisphere, a fact that has suggested the name. The name has been in existence more than 90 years (Balch, 1902; Nordenskjöld, 1904), but its greatest use followed the International Geophysical Year (1957–58) and explorations disclosing that the Transantarctic Mountains provide a useful regional separation of East Antarctica and West Antarctica. The name was approved (in the US) by the Advisory Committee on Antarctic Names (US-ACAN) in 1962. East Antarctica is generally higher than West Antarctica, and is considered the coldest place on Earth.

Very little of East Antarctica is not covered with ice, but the small areas that are (Antarctic oasis), including the McMurdo Dry Valleys inland, constitute a tundra-type biodiversity region known as Maudlandia Antarctic desert, after Queen Maud Land. Only a very limited plant life can survive here, certainly no trees or shrubs, and the flora consists of lichens, moss, and algae, adapted to the cold and wind, and living on, and between, the rocks.

The coasts are home to seabirds, penguins, and seals, which feed in the surrounding ocean, including the Emperor Penguin, which famously breeds in the cold, dark Antarctic winter.

There are no large land animals but bacteria, nematodes, springtails, mites, and midges live on the mosses and lichens.[1]

The remote and extremely cold bulk of Antarctica remains almost entirely untouched by human intervention. The area is protected by the Antarctic Treaty System which bans industrial development, waste disposal and nuclear testing, while the Barwick Valley, one of the Dry Valleys, and Cryptogam Ridge on Mount Melbourne are specially protected areas for their undisturbed plant life.