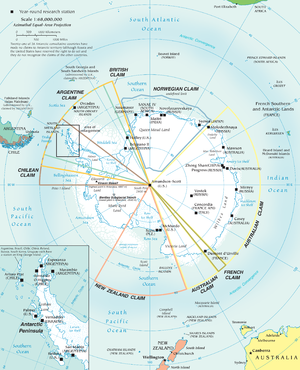 Map of Antarctica; Marie Byrd Land is in the bottom-left between the New Zealand and Chilean claims

Marie Byrd Land is the portion of West Antarctica lying east of the Ross Ice Shelf and the Ross Sea and south of the Pacific Ocean, extending eastward approximately to a line between the head of the Ross Ice Shelf and Eights Coast. It stretches between 158°W and 103°24'W. The inclusion of the area between the Rockefeller Plateau and Eights Coast is based upon the leading role of Rear Admiral Richard E. Byrd in the exploration of this area. The name was originally applied by Admiral Byrd in 1929, in honor of his wife, to the northwestern part of the area, the part that was explored in that year.[1]

Because of its remoteness, even by Antarctic standards, most of Marie Byrd Land (the portion east of 150°W) has not been claimed by any sovereign nation. It is by far the largest single unclaimed territory on Earth, with an area of 1,610,000 km² (including Eights Coast, immediately east of Marie Byrd Land). In 1939, U.S. President Franklin D. Roosevelt instructed members of the United States Antarctic Service Expedition to take steps to claim some of Antarctica as US territory. Although this appears to have been done by members of this and subsequent expeditions, these do not appear to have been formalized prior to 1959, when the Antarctic Treaty System was set up. Some publications in the US have shown this as US territory in the intervening period, and the US Defense Department has stated that the US has a solid basis for a claim in Antarctica resulting from its activities prior to 1959.[2] The portion west of 150°W is part of Ross Dependency of New Zealand.

Five coastal areas are distinguished, which are listed from west to east:

Marie Byrd Land was first explored from the west where it could be accessed from the Ross Sea. The far western coast of Marie Byrd Land was seen from the decks of Robert Falcon Scott's ship Discovery in 1902. He named the peninsula adjacent to the Ross Sea King Edward VII Land and the scattered outcrops that were within sight, the Alexandra Mountains. In 1911, during Roald Amundsen's South Pole expedition, Kristian Prestrud led a sledge party that visited these isolated outcrops (nunataks) in the region bordering the eastern Ross Sea and Ross Ice Shelf. At the same time the first Japanese Antarctic Expedition led by Nobu Shirase landed a shore party on the peninsula.[3]

Aerial overflights in 1929 during Richard E. Byrd's first Antarctic expedition (1928–1930) and originating from Little America near Amundsen's original base camp Framheim in the Bay of Whales, led to the discovery of the Rockefeller Mountains and the Edsel Ford Ranges farther to the east. Byrd named the region after his wife Marie. A geological party led by L. Gould briefly explored parts of the Rockefeller Mountains.[4]

The first deep overland exploration occurred during the second Byrd expedition (1933–1935) when a sledge party led by P. Siple and F.A. Wade reached as far east as the Fosdick Mountains in 1934. Aerial exploration discovered lands farther east along the Ruppert Coast.[5]

The Third Byrd Antarctic Expedition, also called the United States Antarctic Service Expedition, took place from 1939-1941. This expedition established two base camps 1600 miles apart. West Base was near the former Little America base (68° 29' S, 163° 57' W) and East Base was near the Antarctic Peninsula on Stonington Island (68° 12' S, 67° 03' W).[6] Exploration flights out of these two bases led to the discovery of most of the Marie Byrd Land Volcanic Province (e.g. Executive Committee Range[7]) and much of the coastal region including the Walgreen, Hobbs, and Ruppert Coasts.[8] During the expedition trail parties from West Base visited the northern Ford Ranges and south slopes of the Fosdick Mountains.[9]

The USN began construction of Byrd Station at 80°S, 120°W with traverses out of Little America V in 1956-57 during Deep Freeze II. These efforts were in advance of the International Geophysical Year (IGY; from July 1957 to end of 1958) that saw several exploratory overland traverses with tractor trains (Sno-cats and modified bulldozers). Starting in January 1957 (pre-IGY) Charles R. Bentley led a traverse from Little America V to the new Byrd station along the route blazed by U.S. Army engineers a few months before (the Army-Navy Drive[11]). His team conducted measurements of ice thickness and of the Earth’s magnetic and gravity field. The following summer season (1957–58) he led a second traverse out of Byrd Station that visited volcanoes of the Marie Byrd Land Volcanic Province for the first time. The traverse reached the Sentinel Mountains beyond eastern Marie Byrd Land before returning to Byrd Station. Bentley led a third traverse out of Byrd Station to the Horlick Mountains in 1958-59. These three traverses led to the discovery of the Bentley Subglacial Trench or Trough, a deep bedrock chasm between MBL and the Transantarctic Mountains of East Antarctica.[12]

During 1958-1960 TMA flights and a traverse out of Byrd Station visited and mapped the Executive Committee Range. TMA were flown in western Marie Byrd Land in 1964 and 1965. Following these efforts the U.S. Geological Survey (USGS) mounted land surveys to establish a series of reference points and benchmarks throughout much of Marie Byrd Land during 1966-1968.[13]

The USS Glacier explored the parts of the Walgreen Coast and Eights Coast in 1960-61. It had parties of geologists and surveyors along that were deployed to outcrops on land. This expedition to the far eastern reaches of Marie Byrd Land determined that Thurston Peninsula as proposed by earlier expeditions was in fact an island (Thurston Island).[14] In the same season a geological party led by Campbell Craddock explored the Jones Mountains in the adjacent region.[15]

The U.S. Byrd Coastal Survey during 1966-1969, led by F.A. Wade, conducted geologic mapping of the Alexandra and Rockefeller Mountains and the Ford Ranges and produced a series of 1:250,000 geologic maps of the region.[16] This was a complex expedition involving remote helicopter camps and airborne geophysics.[17][citation needed]

Several geological expeditions explored Marie Byrd Land during the period 1978-1993. New Zealand geologists surveyed the Ford Ranges and Edward VII Peninsula in two expeditions 1978-79,[18] and 1987-88.[19] Exploration of the Marie Byrd Land Volcanic Province began in earnest by U.S. geologists in 1984-85.[20] The WAVE project (West Antarctic Volcano Exploration[21]) focused on the volcanic province during the period 1989-91. The SPRITE project (South Pacific Rim International Tectonic Expedition[22]) explored regions and surroundings of the Hobbs Coast in 1990-93. Members of both projects were from the U.S., Britain, and New Zealand. During the Austral summers of 1989-1990 and 1990-1991 a geological party from the University of California, Santa Barbara (UCSB) explored several of the mountain ranges within the northern Ford Ranges of Marie Byrd Land (FORCE expd.; Ford Ranges Crustal Exploration).[23] GANOVEX VII[24] a multinational expedition led by Germany visited Edward VII Peninsula in 1992-93.

Marie Byrd Land hosted the Operation Deep Freeze base Byrd Station (NBY; originally at 80°S, 120°W, rebuilt at 80°S, 119°W), beginning in 1957, in the hinterland of Bakutis Coast. Byrd Station was the only major base in the interior of West Antarctica for many years. In 1968, the first ice core to fully penetrate the Antarctic Ice Sheet was drilled here. The year-round station was abandoned in 1972, and after operating for years as a temporary summer encampment, Byrd Surface Camp, Byrd Station was reopened by the United States Antarctic Program (USAP) in 2009-2010 to support operations in northern West Antarctica.[26]

Byrd Station provided a template for the doomed Antarctic base in the horror movie John Carpenter's The Thing.

In 1998-1999, a camp was operated at the Ford Ranges (FRD) in western Marie Byrd Land, supporting a part of a US Antarctic Program (USAP) airborne survey initiated by UCSB and supported by the University of Texas Institute for Geophysics.[27][citation needed]

In 2004-05, a large camp, Thwaites (THW) was established by the USAP 150 km north of NBY, in order to support a large airborne geophysical survey of eastern Marie Byrd Land by the University of Texas Institute for Geophysics.[citation needed]

In 2006, a major encampment, WAIS Divide (WSD) was established on the divide between the Ross Sea Embayment and the Amundsen Sea Embayment, in easternmost Marie Byrd Land, in order to drill a high resolution ice core over the following three years.[citation needed]

On Ruppert Coast of Marie Byrd Land is the Russian station Russkaya, which was occupied 1980-1990 and is also used as a summer-only station.[citation needed]