The island fox shares the Urocyon genus with the mainland gray fox, the species from which it is descended. Its small size is a result of insular dwarfism, a kind of allopatric speciation. Because the island fox is geographically isolated, it has no immunity to parasites and diseases brought in from the mainland and is especially vulnerable to those the domestic dog may carry. In addition, predation by the golden eagle and human activities devastated fox numbers on several of the Channel Islands in the 1990s. Four island fox subspecies were federally protected as an endangered species in 2004, and efforts to rebuild fox populations and restore the ecosystems of the Channel Islands are being undertaken. Radio collars are being attached to foxes in an effort to track and locate the young foxes. To date these efforts have been largely successful.

There are six subspecies of the island fox,[1] each of which is native to a specific Channel Island, and which evolved there independently of the others. The subspecies are:[1]

Foxes from each island are capable of interbreeding, but have genetic and phenotypic distinctions that make them unique; for example, the subspecies have differing numbers of tail vertebrae.

The small size of the island fox is an adaptation to the limited resources available in the island environment. The foxes are believed to have "rafted" to the northern islands between 10,400 and 16,000 years ago.[3] Initially, fox populations were located on the three northern islands, which were likely easier to access during the last ice age—when lowered sea levels united four of the northernmost islands into a single mega-island (Santa Rosae) and the distance between the islands and the mainland was reduced—it is likely that Native Americans brought the foxes to the southern islands of the archipelago, perhaps as pets or hunting dogs.[4]

Based on the limited fossil record and genetic distance from its gray fox ancestors, the northern island fox subspecies are probably the older subspecies, while the San Clemente island fox has been only resident on its island for about 3,400–4,300 years, and the San Nicolas island fox established itself as an independent group about 2,200 years ago. The Santa Catalina island fox is potentially the most recently evolved subspecies, having been on its island for about 800–3,800 years.[3][5] The fox did not persist on Anacapa Island because it has no reliable source of fresh water; Santa Barbara Island is too small to support the food demands of the fox.

The island fox has gray fur on its head, a ruddy red coloring on its sides, white fur on its belly, throat and the lower half of its face, and a black stripe on the dorsal surface of its tail.[6] In general the coat is darker and duller hued than that of the gray fox. The island fox molts once a year between August and November. Before the first molt pups are woolly and have a generally darker coat than adult foxes. 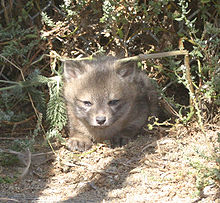 An island fox kit nestled in the brush

The island fox typically forms monogamous breeding pairs which are frequently seen together beginning in January and through the breeding season, from late February to early March. The gestation period is 50–63 days. The island fox gives birth in a den, a typical litter having one to five kits, with an average of two or three. Kits are born in the spring and emerge from the den in early summer; the mother lactates for 7–9 weeks. Sexual maturity is reached at 10 months, and the females usually breed within the first year. Island foxes live for 4–6 years in the wild and for up to 8 years in captivity.[6]

A nighttime shot of an island fox with three mice in its jaws.

Its preferred habitat is complex layer vegetation with a high density of woody, perennially fruiting shrubs. The fox lives in all of the island biomes including temperate forest, temperate grassland and chaparral, with no island supporting more than 1,000 foxes. The island fox eats fruits, insects, birds, eggs, crabs, lizards, and small mammals, including deer mice. The fox tends to move around by itself, rather than in packs. It is generally nocturnal, albeit with peaks of activity at dawn and dusk. Activity also fluctuates with the season; it is more active during the day in summer than it is in winter.[6]

The island fox is not intimidated by humans, although at first may show aggression. It is quite easy to tame and is generally docile.[6] The island fox communicates using auditory, olfactory and visual signals. A dominant fox uses vocalizations, staring, and ear flattening to cause another fox to submit. The island fox marks territory with urine and feces. 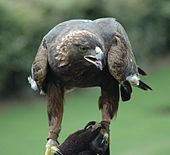 The golden eagle is four times the size of the island fox and can easily prey on the fox.

A decline in island fox populations was identified in the 1990s. On San Miguel Island the decline began in 1994, the adult population falling from 450 to 15 in 1999. Similar population declines were discovered on Santa Cruz Island, where the population decreased from 2,000 adults in 1994 to less than 135 in 2000, and on Santa Rosa Island where foxes may have numbered more than 1,500 in 1994 but were reduced to 14 animals by 2000.[7][8] Golden eagle predation, discovered when foxes were radio-collared and monitored, proved to be the cause of the high mortality rates.[9]

The feral pigs on Santa Rosa were exterminated by the National Park Service in the early 1990s which removed one of the golden eagle's food sources. The golden eagle then began to prey on the island fox population. Feral pigs on Santa Cruz Island and introduced deer and elk on Santa Rosa Island were introduced almost seventy years prior to island fox decline, therefore, the golden eagle most likely did not seek these animals as alternative prey.[11] This has occurred most likely as a result of a process known as 'apparent competition'. In this process, a predator, like the golden eagle, feeds on at least two prey, for example, the island fox and feral pigs. One prey item is adapted to high predation pressure and supports the predator population (i.e. pigs), whereas the other prey item (i.e. the island fox) is poorly adapted to predation and declines as a consequence of the predation pressure. It has also been proposed that complete removal of golden eagles may be the only action that could save three subspecies of the island fox from extinction.[12]

Introduced diseases or parasites can devastate island fox populations. Because the island fox is isolated, it has no immunity to parasites and diseases brought in from the mainland and are especially vulnerable to those the domestic dog may carry. A canine distemper outbreak in 1998 killed approximately 90% of Santa Catalina Island's fox population.[10] (It is difficult to vaccinate against or treat foxes for parasites and disease in the wild.)

Diminished food supply and general degradation of the habitat due to introduced mammal species, including feral cats, pigs, sheep, goats, and American bison, the latter having been introduced to Catalina Island in the 1920s by a Hollywood film crew shooting a Western,[13] also has had a negative effect on fox populations.

The National Parks Service has initiated captive fox breeding programs on San Miguel, Santa Rosa and Santa Cruz Islands, successfully increasing the numbers of resident foxes. In 2004, there were 38 San Miguel island foxes, all in captivity; 46 foxes in captivity on Santa Rosa Island and 7 in the wild (golden eagle predation prevented the release of captive foxes into the wild); Santa Cruz Island had 25 captive foxes and a stable wild population of around 100 foxes.[8] The Catalina Island Conservancy also runs a captive breeding program on Catalina Island; in 2002, there were 17 foxes in captive breeding programs and at least 161 wild foxes.[16]

A key to the recovery of the island fox is the removal of the golden eagle from the Channel Islands, ecosystem restoration and disease control. To ensure survival of the island fox, golden eagles are being moved from the northern islands to the mainland. Maintaining and increasing the bald eagle population on the islands would help to displace the golden eagle. However, the program is extremely resource-intensive and is at risk for cancellation. Removal of feral pigs from Catalina Island and Santa Cruz Island is underway, removing both the golden eagle's food and competition for the island fox. To eliminate the risk of disease, pets are not permitted in Channel Islands National Park. A vaccination program has been initiated to protect Catalina Island foxes from canine distemper.[17]

Because the Channel Islands are almost entirely owned and controlled by either the Catalina Island Conservancy, The Nature Conservancy, or the federal government, the fox has a chance to receive the protection it needs, including constant supervision by interested officials without the ongoing threat of human encroachment on its habitat.

According to the Nature Conservancy summer 2009 magazine, the Santa Cruz Island fox population has rebounded to a population of 700 from being fewer than 100.

While it has been assumed that the foxes existed on these islands long before native people settled on the islands, archaeologists are now challenging this theory. Rene Vellanoweth believes that the foxes were brought to the island with the indigenous people, and had not been there upon their arrival. Vellanoweth also believes that the foxes were moved from island to island with the people, which caused interbreeding amongst the species. He believes the key to restarting the fox population is to do what the indigenous people did: mix their species and move them from island to island, creating a higher genetic diversity and assisting them in recovery.[18]

This audio file was created from a revision of Island fox dated 2010-01-09, and does not reflect subsequent edits to the article. (Audio help)
More spoken articles