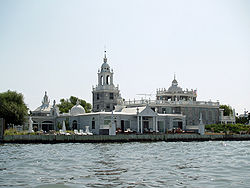 Cherry Grove (often referred to locally as The Grove) is an unincorporated hamlet in the Town of Brookhaven, Suffolk County, New York, United States. It is located on Fire Island, a barrier island separated from the southern side of Long Island by the Great South Bay. The hamlet has approximately 300 houses on 41 acres (170,000 m2), a summer seasonal population of 2,000 and a year-round population of 15.[1]

Cherry Grove, along with nearby Fire Island Pines, is considered one of the most popular lesbian, gay, bisexual, and transgender (LGBT)-accepting resort communities in the United States.[citation needed] The Grove is reputedly the nation's first and oldest LGBT community.[citation needed]

Cherry Grove dates its modern history to the 1868 purchase by Archer and Elizabeth Perkinson. They bought the land between Lone Hill (now Fire Island Pines) and the Cherry Grove Hotel from the ocean to the bay for 25 cents per acre and named the area for the black-cherry trees in the area.[2]

The Perkinsons opened a hotel in 1880. According to local legend Oscar Wilde stayed at the Perkinson Hotel.[3]

In 1921 the Perkisons sold all the land east of Duryea Walk to Lone Hill, and then divided what was left, into 109 building lots. A lot 50 x 80 feet (24 m) could be bought for $250 or less, and ocean-front lots cost no more than a dollar a front foot. Buildings from the newly deactivated Camp Upton in Yaphank, New York, were ported over to form the core of the new colony.

A post office was established in 1922 at the site of where "Tides" (formerly “The Monster”) is today; The first boardwalks were built in 1929.

In 1930 Duffy’s Hotel replaced the original hotel and was the only place with electricity and a phone.

According to legend the gay aura of the town arose when Christopher Isherwood and W. H. Auden arrived dressed as Dionysus and Ganymede, carried aloft on a gilded litter by a group of singing followers.[4] Duffy’s attempted to ban same-sex dancing until after midnight.[5]

Duffy’s burned on September 27, 1956, and was replaced by the Ice Palace Hotel which has remained a popular destination.

The Grove has become home to three massive homes: Cielo E Mar (an aria from the 1876 opera La Gioconda which translates to "Sky and Sea"), the Belvedere, and Bottom of the Garden.

The Cherry Grove Fire Department (CGFD) is a low incident department. The CGFD also has pull stations located at every other street corner where unique hose houses contain vital equipment that would be needed by the members to suppress any fire. This is due to the unique nature of Cherry Grove. There are no roads, only boardwalks, hence no ability to respond with a fire engine. If you spot a fire or emergency you should call 911 or run to the nearest street corner and pull the lever down. By doing this you are activating the fire siren which alerts the members to respond. CGFD is one of the few fire departments that still uses a manual pull station system. You can visit the department's website at cgfd.org [1].

Recreation and sites of interest

Cherry Grove is accessible via two major walks (Bayview and Lewis), which are generally parallel to the beach, and sixteen minor walks (Ivy, Sumner, Maryland, Aeon, Gerard, Greene, Duryea, Doctors, Main, Ocean, Holly, Surf, Beach, Sea, East, and West), which are generally perpendicular to the beach. South Walk (not shown in the map at right) is parallel to the beach and extends between Surf and Beach Walks. Its businesses are concentrated on (or near) Ocean Walk and include real-estate offices, casual-dining restaurants, bars, clubs, a grocery, a theater, and clothing and gift stores. Also, the Community House, located near the intersection of Holly and Bayview Walks, provides a wide variety of public services to the Grove. Generally speaking, unlike at many other resort communities in the US, gay couples and activities are the norm.

The main outdoor attraction is the beach and the surrounding protected portions of the Fire Island National Seashore.[6] Clothing-optional sunbathing is acceptable at the beach.

There are at least six restaurants that operate within Cherry Grove, varying from pizza and breakfast to seafood and fine-dining. Also, there are at least four entertainment venues hosting plays, art shows, dancing, underwear parties, drag shows, and various community events.

Civic activities in the Grove include charity events and an Awards Night, during which votes are taken and titles bestowed upon residents and local businesses.

A big event on the Cherry Grove social calendar is the 4th-of-July weekend "Invasion of the Pines", which dates back to 1976, when a resident of the Grove showed up wearing drag in Fire Island Pines and was refused service. In the 1970s, the Pines was a more-conservative, more-heterosexual community than the Grove. 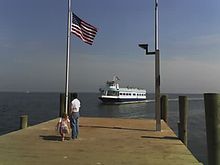 Cherry Grove is only accessible by water with most residents and visitors using a passenger ferry or private water taxi. A small marina is also available. There are no private vehicles in this part of Fire Island, although police and service vehicles are seen on the beach from time to time. The Grove has no paved roads and the cottages and beach are only accessible using a series of wooden boardwalks.

Visitors arriving by car may park at the Robert Moses State Park “Field Five” parking lot. After reaching the Fire Island Lighthouse, the Fire Island Water Taxi will ferry paying customers to the Grove. The water taxi provides short-distance transportation for those moving from place to place along the coast of Fire Island. The fare and schedule for the taxi service varies by season. [2]