The mechanism of enzyme catalysis is similar in principle to other types of chemical catalysis. By providing an alternative reaction route and by stabilizing intermediates the enzyme reduces the energy required to reach the highest energy transition state of the reaction. The reduction of activation energy (Ea) increases the number of reactant molecules with enough energy to reach the activation energy and form the product. 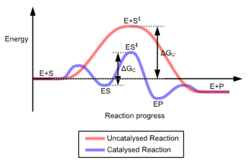 Stabilization of the transition state by an enzyme.

Diagrams to show the induced fit hypothesis of enzyme action.

The favored model for the enzyme-substrate interaction is the induced fit model.[1] This model proposes that the initial interaction between enzyme and substrate is relatively weak, but that these weak interactions rapidly induce conformational changes in the enzyme that strengthen binding. 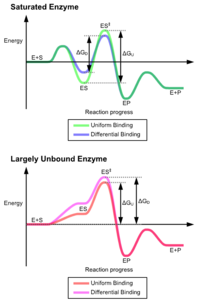 The different mechanisms of substrate binding

These effects have led to most proteins using the differential binding mechanism to reduce the Ea, so most proteins have high affinity of the enzyme to the transition state. Differential binding is carried out by the induced fit mechanism - the substrate first binds weakly, then the enzyme changes conformation increasing the affinity to the transition state and stabilizing it, so reducing the activation energy to reach it.

It is important to clarify, however, that the induced fit concept cannot be used to rationalize catalysis. That is, the chemical catalysis is defined as the reduction of Ea‡ (when the system is already in the ES‡) relative to Ea‡ in the uncatalyzed reaction in water (without the enzyme). The induced fit only suggests that the barrier is lower in the closed form of the enzyme but does not tell us what the reason for the barrier reduction is.

Induced fit may be beneficial to the fidelity of molecular recognition in the presence of competition and noise via the conformational proofreading mechanism .[2]

In addition to bond strain in the substrate, bond strain may also be induced within the enzyme itself to activate residues in the active site.

Catalysis by proximity and orientation

This increases the rate of the reaction as enzyme-substrate interactions align reactive chemical groups and hold them close together. This reduces the entropy of the reactants and thus makes reactions such as ligations or addition reactions more favorable, there is a reduction in the overall loss of entropy when two reactants become a single product.

This effect is analogous to an effective increase in concentration of the reagents. The binding of the reagents to the enzyme gives the reaction intramolecular character, which gives a massive rate increase.

However, the situation might be more complex, since modern computational studies have established that traditional examples of proximity effects cannot be related directly to enzyme entropic effects.[6][7][8] Also, the original entropic proposal[9] has been found to largely overestimate the contribution of orientation entropy to catalysis.[10]

Proton donors and acceptors, i.e. acids and bases, may donate and accept protons in order to stabilize developing charges in the transition state. This typically has the effect of activating nucleophile and electrophile groups, or stabilizing leaving groups. Histidine is often the residue involved in these acid/base reactions, since it has a pKa close to neutral pH and can therefore both accept and donate protons.

Many reaction mechanisms involving acid/base catalysis assume a substantially altered pKa. This alteration of pKa is possible through the local environment of the residue.

The pKa is can be modified significantly by the environment, to the extent that residues which are basic in solution may act as proton donors, and vice versa.

It is important to clarify that the modification of the pKa’s is a pure part of the electrostatic mechanism.[4] Furthermore, the catalytic effect of the above example is mainly associated with the reduction of the pKa of the oxy anion and the increase in the pKa of the histidine, while the proton transfer from the serine to the histidine is not catalyzed significantly, since it is not the rate determining barrier.[11]

Stabilization of charged transition states can also be by residues in the active site forming ionic bonds (or partial ionic charge interactions) with the intermediate. These bonds can either come from acidic or basic side chains found on amino acids such as lysine, arginine, aspartic acid or glutamic acid or come from metal cofactors such as zinc. Metal ions are particularly effective and can reduce the pKa of water enough to make it an effective nucleophile.

Systematic computer simulation studies established that electrostatic effects give, by far, the largest contribution to catalysis.[4] In particular, it has been found that enzyme provides an environment which is more polar than water, and that the ionic transition states are stabilized by fixed dipoles. This is very different from transition state stabilization in water, where the water molecules must pay with "reorganization energy".[12] in order to stabilize ionic and charged states. Thus, the catalysis is associated with the fact that the enzyme polar groups are preorganized [13]

Covalent catalysis involves the substrate forming a transient covalent bond with residues in the active site or with a cofactor. This adds an additional covalent intermediate to the reaction, and helps to reduce the energy of later transition states of the reaction. The covalent bond must, at a later stage in the reaction, be broken to regenerate the enzyme. This mechanism is found in enzymes such as proteases like chymotrypsin and trypsin, where an acyl-enzyme intermediate is formed. Schiff base formation using the free amine from a lysine residue is another mechanism, as seen in the enzyme aldolase during glycolysis.

It is important to clarify that covalent catalysis does correspond in most cases to simply the use of a specific mechanism rather than to true catalysis.[4] For example, the energetics of the covalent bond to the serine molecule in chymotrypsin should be compared to the well-understood covalent bond to the nucleophile in the uncatalyzed solution reaction. A true proposal of a covalent catalysis (where the barrier is lower than the corresponding barrier in solution) would require, for example, a partial covalent bond to the transition state by an enzyme group (e.g., a very strong hydrogen bond), and such effects do not contribute significantly to catalysis.

These traditional "over the barrier" mechanisms have been challenged in some cases by models and observations of "through the barrier" mechanisms (quantum tunneling). Some enzymes operate with kinetics which are faster than what would be predicted by the classical ΔG‡. In "through the barrier" models, a proton or an electron can tunnel through activation barriers.[18][19] Quantum tunneling for protons has been observed in tryptamine oxidation by aromatic amine dehydrogenase.[20]

Interestingly, quantum tunneling does not appear to provide a major catalytic advantage, since the tunneling contributions are similar in the catalyzed and the uncatalyzed reactions in solution.[19][21][22][23] However, the tunneling contribution (typically enhancing rate constants by a factor of ~1000[20] compared to the rate of reaction for the classical 'over the barrier' route) is likely crucial to the viability of biological organisms. This emphasizes the general importance of tunneling reactions in biology.

In reality, most enzyme mechanisms involve a combination of several different types of catalysis.