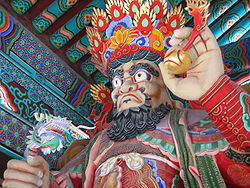 In the Buddhist faith, the Four Heavenly Kings are four gods, each of whom watches over one cardinal direction of the world.

The Kings are collectively named as follows:

They currently live in the Cāturmahārājika heaven (Pāli Cātummahārājika, "Of the Four Great Kings") on the lower slopes of Mount Sumeru, which is the lowest of the six worlds of the devas of the Kāmadhātu. They are the protectors of the world and fighters of evil, each able to command a legion of supernatural creatures to protect the Dharma. They are:

Further associations between the four directions and elements, seasons, planets, animals, internal organs, etc. can be found at Five elements (Chinese philosophy). Note, however, that the colors assigned to the Four Heavenly Kings represent an independent tradition and do not correspond to the traditional Chinese association of colors and directions.

All four serve Śakra, the lord of the devas of Trāyastriṃśa. On the 8th, 14th and 15th days of each lunar month, the Four Heavenly Kings either send out messengers or go themselves to see how virtue and morality are faring in the world of men. Then they report upon the state of affairs to the assembly of the Trāyastriṃśa devas.

On the orders of Śakra, the four kings and their retinues stand guard to protect Trāyastriṃśa from another attack by the Asuras, which once threatened to destroy the kingdom of the devas. They are also vowed to protect the Buddha, the Dharma, and the Buddha's followers from danger.

According to Vasubandhu, devas born in the Cāturmahārājika heaven are 1/4 of a krośa in height (about 750 feet tall). They also have a five-hundred year lifespan, of which each day is equivalent to 50 years in our world; thus their total lifespan amounts to about nine million years (other sources say 90,000 years). 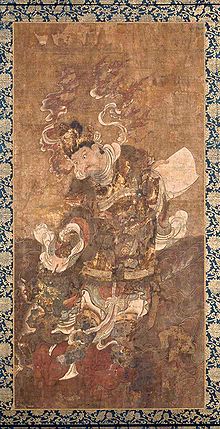 Painting of Kōmokuten (Virūpākṣa), the Guardian of the West (one of the Four Guardian Kings). 13th century.

These symbols also link the deities to their followers; for instance, the nāgas, magical creatures who can change form between human and serpent, are led by Virūpākṣa, represented by a snake; the gandharvas are celestial musicians, led by Dhṛtarāṣṭra, represented with a lute. The umbrella was a symbol of regal sovereignty in ancient India, and the sword is a symbol of martial prowess. Vaiśravaṇa's mongoose, which ejects jewels from its mouth, is said to represent generosity in opposition to greed.