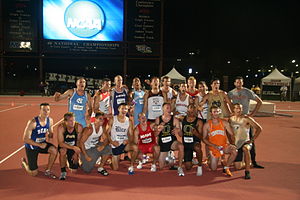 The decathlon is a combined event in athletics consisting of ten track and field events. The word decathlon is of Greek origin (from δέκα deka [ten] and αθλος athlos [contest]). Events are held over two consecutive days and the winners are determined by the combined performance in all. Performance is judged on a points system in each event, not by the position achieved.[1] The decathlon is contested mainly by male athletes, while female athletes typically compete in the heptathlon.

Traditionally, the title of "World's Greatest Athlete" has been given to the man who wins the decathlon. This began when King Gustav V of Sweden told Jim Thorpe, "You, sir, are the world's greatest athlete" after Thorpe won the decathlon at the Stockholm Olympics in 1912.[2] The current holder of the title is American Bryan Clay, the gold medal winner of the event at the 2008 Beijing Olympics, who took the title from Athens Olympics Czech champion Roman Šebrle.[3]

The event developed from the ancient pentathlon. Pentathlon competitions were held at the ancient Greek Olympics. Pentathlons involved five disciplines – long jump, discus throw, javelin throw, sprint and a wrestling match.[4] Introduced in Olympia during 708 BC, the competition was extremely popular for many centuries. By the 6th century BC, pentathlons had become part of religious games. The Amateur Athletic Union held "all around events" from the 1880s and a decathlon first appeared on the Olympic athletics program at the 1904 Games.[5]

The vast majority of international and top level men's decathlons are divided in to a two-day competition, with the track and field events held in the order below. Traditionally, all decathletes who finished the event do a round of honour together after the competition, rather than just the winner or medalling athletes.

At major championships, the women's equivalent of the decathlon is the seven-event heptathlon; prior to 1981 it was the five-event pentathlon.[6] However, in 2001 the IAAF approved scoring tables for women's decathlon; the current world record holder is Austra Skujytė of Lithuania.[7] Women's disciplines differ from men's in the same way as for standalone events: the shot, discus and javelin weigh less, and the sprint hurdles uses lower hurdles over 100 m rather than 110 m. The points tables used are the same as for the heptathlon in the shared events. The schedule of events differs from the men's decathlon, with the field events switched between day one and day two; this is to avoid scheduling conflicts when men's and women's decathlon competitions take place simultaneously.[8]

One hour decathlon is a special type of decathlon, in which the athletes have to start the last of ten events (1500 m) within sixty minutes after the start of the first event. The world record holder is a Czech decathlete Robert Změlík, who achieved 7897 points at a meeting in Ostrava, Czechoslovakia, in 1992.[9]

The 2001 IAAF points tables use the following formulae:[10]

A, B and C are parameters that vary by discipline, as shown in the table below, while P is the performance by the athlete, measured in seconds (running), metres (throwing), or centimetres (jumping).[10]

The decathlon tables should not be confused with the scoring tables compiled by Bojidar Spiriev, to allow comparison of the relative quality of performances by athletes in different events. On those tables, for example, a decathlon score of 9006 points equates to 1265 "comparison points", the same number as a triple jump of 18.00 m.[11]

Split evenly between the events, the following table shows the benchmark levels needed to earn 1000, 900, 800 and 700 points in each sport.

The current world record holder for the decathlon is Roman Šebrle of the Czech Republic, with his score of 9026 points set in 2001.[12]