Akzo Nobel N.V., trading as AkzoNobel, is a Dutch multinational, active in the fields of decorative paints, performance coatings and specialty chemicals. Headquartered in Amsterdam, the company has activities in more than 80 countries, and employs approximately 55,000 people. Sales in 2010 were EUR 14.6 billion.[1] Following the acquisition of ICI, the company has restructured in 2 January 2008, and rebranded itself in 25 April of the same year. 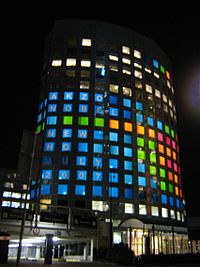 AkzoNobel consists of 19 business units, with business responsibility and autonomy. For managerial purpose these cooperate in three groups, which are supported by one managerial board.[2]

As of January 1, 2011, a nine member-strong Executive Committee (ExCo) was established, which is composed of five members of the Board of Management (BOM) and four leaders with functional expertise, allowing both the functions and the business areas to be represented at the highest levels in the company.

Due to high revenues from the sales of its pharmaceutical business, AkzoNobel was the world's most profitable company in 2008.[4]

AkzoNobel is the world's leading decorative paints company. This part of the business is mostly geographically organized:[5]

AkzoNobel is a leading coatings company whose key products include automotive coatings, specialized equipment for the car repair and transportation market and marine coatings. The coatings groups consist of the following business units:[5]

As chemicals producer, AkzoNobel is a world leading salt specialist, chloralkali products, and other industrial chemicals. Ultimately, AkzoNobel products are found in everyday items such as paper, ice cream, bakery goods, cosmetics, plastics and glass. Each business unit has an annual turnover of approx EUR 600–1000 million.

AkzoNobel has a long history of mergers and divestments. Parts of the current company can be traced back to 17th century companies.[6] The milestone mergers and divestments are the formation of AKZO in 1969, the merger with Nobel Industries in 1994 forming Akzo Nobel, and the divestment of its pharmaceutical business and the merger with ICI in 2007/2008 resulting in current day AkzoNobel.

The Swedish weapons manufacturer Bofors was founded in Karlskoga in 1646. Nobel Industries was created in 1984 by the merger of a chemical company, KemaNobel, and the armaments maker, Bofors. Both Bofors and KemaNobel had historic ties to Alfred Nobel, the great 19th century Swedish inventor who was the first to discover a way to detonate the flammable liquid nitroglycerin.

Cascogard develops into the production of agricultural chemicals such as weed killers, insecticides and fungicides.

Probel produces specialty chemicals and systems for agriculture, food and technical industries. Probel is in turn divided into two areas, Kenogard, for plant and wood protection, and Surfactants, for initiators, detergents, anti-caking and ScanRoad.

Together with Casco and Nordsjo forms the business area, Casco Nobel.

The first products are chlorine and alkali.