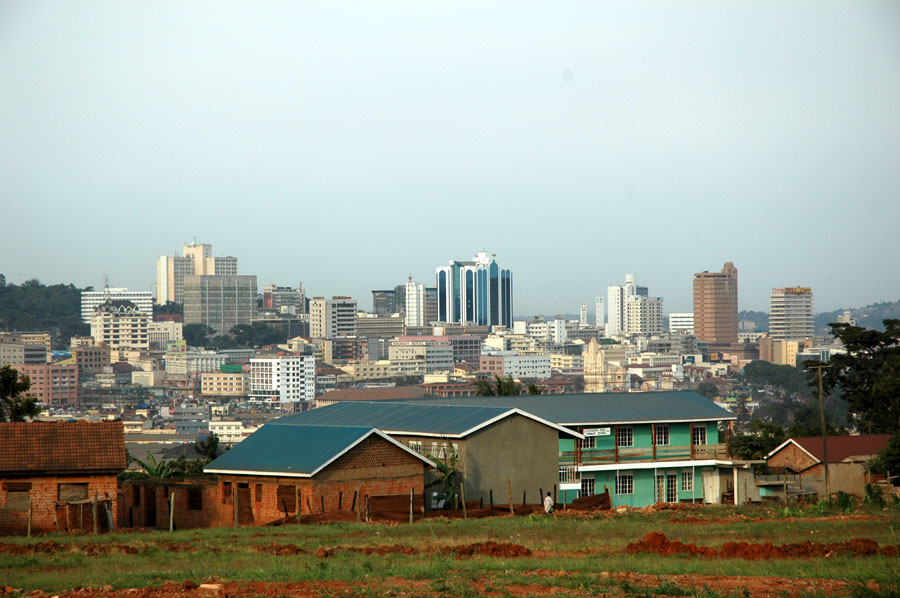 Kampala is the of . With a population of 1,208,544 (2002) [ [http://www.hcareuganda.org/profile_kampala.html] Ministry of Finance & Economic Planning] it is the largest city in Uganda. It is coterminous with the district of Kampala. The city is divided into five boroughs that oversee local planning: Central, Kawempe, Makindye, Nakawa and Rubaga.

Before the arrival of the British, Mutesa I the Kabaka (king) of had chosen the area that was to become Kampala as one of his favourite hunting grounds. The area was made up of numerous rolling hills and lush wetlands. It was an ideal breeding ground for various game, particularly a species of antelope, the ("Aepyceros melampus"). The origin of the word impala is likely from the in , adapted into English. The British called the area "the hills of the Impala". Translated to it became "kasozi ka Impala". With time, local usage took to referring to the Kabaka's hunting expeditions as "Kabaka agenze e ka´empala" ("The Kabaka has gone to Ka'mpala"). Eventually the hills became known as Kampala. ["", November 2007]

The city grew as the capital of the kingdom, from which several buildings survive, including the (built in 1881), the , the and the . Severely damaged in the , the city has since then been rebuilt, with constructions of new buildings including hotels, banks, shopping malls, educational institutions, hospitals and improvement of war torn buildings and infrastructure. Traditionally, Kampala was a city of seven hills, but overtime it has come to have a lot more.

The main campus of , one of East and 's premier institutes of higher learning, can be found in the area of the City. Kampala is also home to the headquarters of the .

Like many cities, Kampala is said to be built on seven hills, although this isn't quite accurate.
*The first hill in importance is Kasubi Hill, which is where the of the previous Kabakas are housed.
*The second is Hill where the present is and the Headquarters of the .
*The third is Hill, which is home to the Kibuli . Islam was brought to Uganda before the Christian missionaries came.
*The fourth is Namirembe Hill, home to the Namirembe Protestant . The Protestants were the first of the Christian Missions to arrive.
*The fifth is Hill, where the Rubaga Catholic is, and was the headquarters of the White Fathers.
*The sixth , was the Headquarters of the Mill Hill Mission. It now houses Nsambya .
*The seventh, the little hill of Kampala, the hill of the Impala is where the ruins of Lugard's were. However, the ruins were recently destroyed (2003), when the Uganda Muslim Supreme Council (UMSC) started on reconstruction of a 15,000-seater mosque on land that included the fort. The mosque was began by President Amin but was never completed. The fort was then re-located to a nearby area (a new and similar one constructed), a move that has since been a source of controversy between The Historic Buildings Conservation Trust (HBCT) of Uganda and the UMSC. The UMSC was given the gazetted land as a gift by President Idi Amin in 1972 during its inauguration. This hill is where Kampala got its name.

The City spread to Hill where the administrative centre and the wealthiest residential area is. There is also Tank Hill, where there is a water tank. Mulago Hill is the site of Mulago Hospital, which is the largest hospital in Uganda. Makerere Hill, where is situated. The city is now rapidly expanding along both sides of the Makindye Hill and Konge Hill. Makindye Division incorporating , Tank Hill and Makindye now has 300,000 residents. Medical provision in this part of town, being more recently developed, is limited. Hospitals include Kibuli Hospital, St Francis Nsambya and the International Hospital (IHK). Philanthropic health services are provided by situated between Makindye/ Konge and Tank Hills.

Other features of the city include the , , (formerly Owino Market) and . Kampala is also known for its nightlife, which includes a . is located at , 35 km (22 miles) away, while on the shore of is 10 km (7 miles) away.

Also to note is that Kampala hosts one of only seven Bahá'í Houses of Worship in the world. It is known as the Mother Temple of Africa and is situated on Kikaya Hill on the outskirts of the city. Its foundation stone was laid in January 1958, and was dedicated on January 13, 1961. See .

In early 2007, it was announced that Kampala would remove commuter taxis from its streets and replace them with a comprehensive city bus service, Fact|date=February 2008 which will also cover the greater Kampala metropolitan area including Mukono, Mpigi, Bombo, Entebbe, Wakiso and Gayaza. The decision is yet to be implemented. s -local motorcycle transportation are a popular mode of transport that gives access to many areas with in and outside the city. Standard fees for these range from 500 to 1000 or more. They are quite handy for those who do not want to be stuck in traffic for long. Passengers always need to ask the rider to slow down or rather take it slow so as to avert any accidents. Fact|date=September 2008

New calls for directing heavy vehicles away from the city and opening bus and taxi terminals outside the city. Fact|date=February 2008

The Kampala City Council will introduce a congestion fee of sh30,000 per vehicle per day when the bus network is implemented. ["Car owners to pay for city entry." 6 Dec 2006, The New Vision. [http://www.newvision.co.ug/D/8/13/536327] ] This decision is also yet to be implemented.

Kampala has a diverse ethnic population, although the - the local tribe make up over 60% of the Greater Kampala region. The city's ethnic make up has been defined by political and economic factors. During the rule of and in the 1960s, 70's and 80's who were both from northern Uganda, a significant number of northern Ugandans moved into Kampala. Most served in the armed forces and the police. Most settled around the areas where the Military and Police barracks were located - Naguru, Bugolobi and Mbuya. With the overthrow of in 1986, many northern Ugandans fled the city. At the same time a large number of western Ugandans (particularly the ) moved in reflecting the large proportion of western Ugandans in the new government of .

The mismanagement of Uganda's economy during the 1970s and 1980's meant that there were fewer employment opportunities outside Kampala. This encouraged many people from around the country to move into the city, and most have not moved back to their home districts after the revitalization of the economy in the 1990s.

Inter-tribal marriage in Uganda is still rare, and although many Kampala residents have been born and bred in the city they still define themselves by their tribal roots. This is more evident in the suburbs of the city, where local languages are spoken widely alongside English, and . Apart from the Baganda and Banyankole, other large ethic groups include the , , , , , , and .