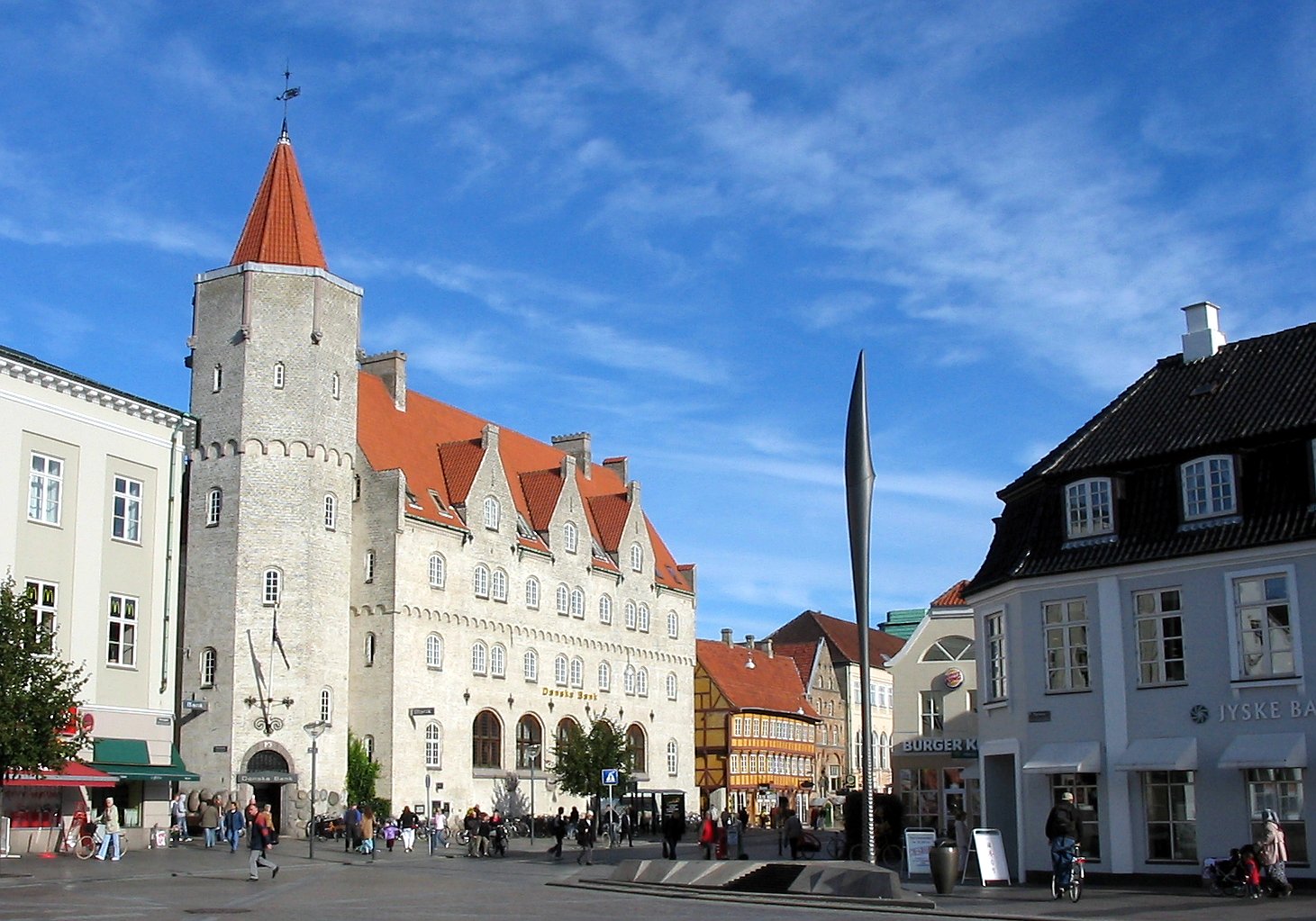 Aalborg (audio|Aalborg.ogg|pronunciation IPA IPA2|ˈʌlb̥ɒːˀ) is a city in . Its population, as of 2006, is 121,540, making it the fourth largest in the country after , , and . The earliest settlements date back to around 700 AD. Its location by the made it an important harbour during the Middle Ages, and an industrial centre later. Today the city is in a transition from a working-class, industrial city to a knowledge-based one. One of the driving forces in the transition is the , founded in 1974.

It is the location of , an important base of the Danish air force, and is the seat of a within the Danish National Church.

Aalborg traces its history back over 1000 years. It was originally settled as a trading post, because of its position on the . The sites of what were two settlements and a visible burial ground can be seen on , a hill overlooking the city. The size of these settlements emphasise the significance of this place as a crossroads.

The first mention of Aalborg under its original name "Alabu", is found on a coin dated to 1040. An alternative spelling is "Alebu" and an approximate translation of the name is "The (dwelling) place by the stream".During the , Aalborg prospered and became one of the largest cities in Denmark. This prosperity was further enhanced when in 1516 Aalborg was granted a in salt herring. The herring fishery linked Aalborg to the East coast of England, across the North Sea, both in commercial competition and cultural exchange. The panelled interior from an Aalborg house in the National Museum, Copenhagen ("illustration"), shares many details with panelled rooms.

Aalborg received town privileges in 1342 and the bishopric dates from 1554.

During the in 1940, the Aalborg Aerodrome was captured by German very early in the action and Aalborg is said to be the first city ever to be captured by paratroopers. The aerodrome was crucial for German aircraft to be able to reach Norway.

The First European Conference on Sustainable Cities and Towns took place in Aalborg, in 1994. The Conference adopted the Aalborg Charter (http://ec.europa.eu/environment/urban/pdf/aalborg_charter.pdf), which provides a framework for the delivery of local sustainable development, and calls on local authorities to engage in Local processes.

The 4th European Sustainable Cities and Towns Conference ("Aalborg +10": http://www.aalborgplus10.dk/), held in Aalborg in 2004, adopted the Aalborg +10 Commitments. These commitments are an important step forward in turning sustainable urban development from words into real actions.

is the local airport.

The city has a main train station, close to J. F. Kennedy-Square.

The , going from Finland to Italy, passes through Aalborg.

Aalborg is a still an industrial and commercial centre in Denmark, exporting grain, and fish, but many of the big industries in the city have been closed in recent years.

It is also the centre of telecommunications industry originating from the .

, the world's largest manufacturer of marine boilers, is headquartered here.

The old ("Aalborghus Slot") and some picturesque houses of the 17th century remain in the center of the town. The half-timbered ("bindingsværk") castle was built in 1550 by King Christian III, and was converted to government administration offices in the 1950s.

, a five story building built in 1624 by the merchant Jens Bang is an example of . It is located on Nytorv next to the old Town Hall.

The present dates from the end of the 14th century, although at least two earlier churches stood on the same spot. Budolfi Church was just a parish church until it became the seat of the Lutheran bishop of Aalborg Diocese in 1554.

"Vor Frue Kirke" (Church of Our Lady) is a relatively modern church. The original Church of Our Lady from the early 1100's was pulled down after the Reformation because it was so old and unstable. The newer building in a different location was partially burned in 1894.

Underneath the main pedestrian shopping street is a newly opened museum of the excavation of a monastery from the 11th century.

is a tripod tower erected in 1933. The tower still gives an exquisite view over the fjord and the city from its 105 m rise over the sea level. Just below the hill of the tower is Aalborg Kunstmuseum (Aalborg museum of Art) in a building designed by Finnish architect Alvar Aalto.

On the north side of the Limfjord is , which is connected to Aalborg by a road bridge, an iron railway bridge, as well as a motorway tunnel running under the Limfjord. is the site of the settlement and burial ground from the Germanic Iron Age and times. There is also a museum on the site.

is located in the city.

Right now a building of Jørn Utzon called: Jørn Utzon Centeret, is being build next to the water in Limfjorden. Jørn Utzon is Danish, and was born in Copenhagen, but lived in Aalborg with wife and a kid, who was boy in Aalborg Seascouts. It's a very popular group, which is sailing and just love everything out on sea. He has also been the architect to the famous Sydney Opera House.

The annual [http://www.karnevaliaalborg.dk Carnival in Aalborg] takes place in the weekend of week 21 (usually the last week in May). The Carnival is actually three events, the children's carnival (Børnekarneval), the battle of carnival bands, and the carnival itself.

During the carnival, Aalborg receives about 100,000 people. The children's carnival is a carnival dedicated to the children, with performances and activities for children. Friday “The Battle of Carnival Bands” is an exciting and colourful evening with processions through the city when all the participating groups compete to be the leading carnival group.

The carnival itself is the following Saturday – on this day the city centre is full of life. The streets are filled with gaily dressed people who are in a real spring mood. In Kildeparken concerts are given from various stages all day to midnight. The Carnival ends with a grand firework display.

One of the most popular and famous streets in Aalborg, maybe even in Denmark and parts of Norway, Sweden and Germany, is "Jomfru Ane Gade", or simply just "Gaden" ("The Street"). The name translates to "Virgin (or Miss) Anne's Street" in English. The pubs and restaurants on this street offer beer and other spirits for some of the most competitive prices in Denmark.

Jomfru Ane Gade is a café and restaurant street during day which, at night, turn into clubs, discos and bars. During the 1990s the street was infamous for being a 'hang out' of two who were at war for some years all over Scandinavia, but as the bikers disappeared from the street it became even more popular among people of all ages.

During the day, tourists and employees in the city use the street as a restaurant street. In the afternoons some of the cafés open. Around 11 pm the mood of the street changes into more of a party street when younger people 'show up'.

Aalborg maintains cultural, economic and educational ties with 27 cities around the globe [http://www.aalborgkommune.dk/Borgerportal/Serviceomraader/Byen/Venskabsbyer/Towns.htm] . Thus, Aalborg has the most twin cities in Denmark. Every four years Aalborg gathers youth from the majority of its twin cities for a week of sports games, known as Ungdomslegene (The Youth Games).

The city has Denmark's highest number of shops, parlours, bars, s, s and s per inhabitant.