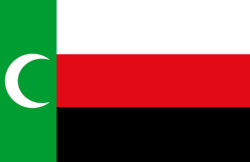 Flag of the Meskhetian Turks

During the rule of the Ottoman Empire (1299-1922), Turkish settlers moved into Meskheti as part of the Turkish expansion. The resulting mix of Turkish and Meskheti populations became known as the Meskhetian Turk.[13]

In 1958-62 the settlement of over 20,000 families was sanctioned by the government of Soviet Azerbaijan in the districts of Saatly Rayon, Sabirabad Rayon, Khachmaz Rayon and Shamkir Rayon.[14] In May 1989 a pogrom[15][16][17] of Meskhetian Turks occurred in the crowded and poor Fergana Valley, Uzbekistan as a result of growing ethnic tensions during the era of Glasnost. This triggered an evacuation of Meskhetian Turks from Uzbekistan. In the last years of the Soviet Union, pogroms in Uzbekistan brought the latest wave of Meskhetian Turks to Azerbaijan from 1989 onward, which settled mostly in the districts Balakan Rayon, Zaqatala Rayon, Qakh Rayon near the Georgian border. The Azerbaijani government, facing problems with its own 1 million internally displaced and external Azeri refugees from its break-away region of Nagorno-Karabakh and Armenia, did not accept larger numbers and the further settlement of Meskhetian Turks to Azerbaijan was stopped in 1993.[14][18] According to the 1998 Citizenship Law, Meskhetian Turks as well as Azerbaijani refugees from Armenia, are all eligible for citizenship. By the end of 2001, UNHCR estimated that most of them were believed to have naturalized or be in the process of doing so.[19]

In the 1990s, Georgia began to receive Meskhetian settlers, provided that they declared themselves to be of ethnic Georgian origin. One of the human rights campaigners on their behalf was Guram Mamulia. Their resettlement created tension among the Georgian and Armenian population of Samtskhe-Javakheti province[citation needed]. Turkey, seen as their homeland by many Meskhetian Turks themselves, started a program of resettling Meskhetian immigrants in the underprivileged, Kurdish majority eastern regions of the country. This program was for fewer than 200 individuals, and fell short of expectations. The government of the Soviet Union encouraged Meskhetians to settle in selected oblasts of the Russian SSR, and most received Russian Federation citizenship in 1992. The legal status of those who moved to Krasnodar Krai, however, remained undetermined, and many were Stateless.[20] Their presence caused tensions with the local Kuban Cossack population, who, according to human rights activists, in coordination with local authorities[citation needed] lead persecutions of them. Russian authorities called the stateless Meskhetians "foreigners who have no right to remain in Russia"[citation needed] and play down reports about Cossack violence.[21] To help resolve the situation, the International Organization for Migration implemented a program to resettle Meskhetian Turks from the Krasnodar Krai to the United States between 2004 and 2007. In cooperation with the two governments (Russia and the US), approximately 11,500 individuals departed.

Meskhetian Turks are often described as the 'twice deported people'.[22] They were forcibly displaced from Georgia to Central Asia in 1944 by the Stalin regime. The majority moved to Uzbekistan but after violent riots which took place in 1989, they were moved to Azerbaijan, Kazakhstan, Kyrgyzstan, Russia, Turkey and Ukraine.

More recently, some Meskhetian Turks in Russia, especially those in Krasnodar, have faced hostility from the local population. The Krasnodar Meskhetian Turks have suffered significant human rights violations, including the deprivation of their citizenship. They are deprived of civil, political and social rights and are prohibited from owning property and employment.[23] Thus, since 2004, many Turks have left the Krasnodar region for the United States as refugees, which is now becoming their third deportation. They are still barred from full repatriation to Georgia.[24]

Homeland       Diaspora outside the USSR

Meskhetian Turks are predominantly Sunni Muslims. However some of them are Shia Muslims in Azerbaijan.[citation needed]

Meskhetian Turks speak an Eastern Anatolian dialect of Turkish, which hails from the regions of Kars, Ardahan, and Artvin. Their Turkish dialect is very close to Azerbaijani, to which it is closer than to the Istanbul dialect also called "Istanbul Turkish", which forms the standard of the Turkish language.[41]

Meskhetian Turkish is not recognised as a separate language though ethnic Meskhetians refer to it as Ahıska Türkçäsi / Аҳыска Тÿркчäси using a variant of the Uzbek Cyrillic alphabet. For the most part, the Turkish alphabet is more widely accepted when writing, which would attempt to follow more closely with Turkish orthography and vocabulary. The majority of the older generation Meskhetian Turks received their secondary education in Uzbekistan and other former Soviet republics, therefore, when writing, the Uzbek alphabet or Kazakh alphabet, or a combination of the two is used. Meskhetian Turkish has no standardised orthography or standardised alphabet.

Meskhetian Turkish varies in several ways from Standard Turkish in pronunciation. Over the years, Meskhetian Turkish has picked up various sounds that are not represented in the Turkish alphabet. However, those differentiations of the dialect occurred after the exile in 1944. For instance, the sound [q] from Uzbek, represented by the letter q or қ in the word qabul etmäk or қабул етмäк and also the Uzbek pronunciation of the sound /ʁ/ represented by ğ or ғ instead of the Turkish. In Meskhetian, there is a obvious distinction made between [æ] and [ɛ], as opposed to Turkish. In addition to /h/, Meskhetian also makes use of the sound /x/.