Turks of the Dodecanese

Turks of the Dodecanese 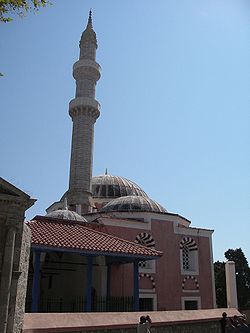 An Ottoman Turkish mosque in Rhodes

The Turks of the Dodecanese form a 5,000-strong [1] community of ethnic Turks inhabiting the Dodecanese islands of Rhodes and Kos (İstanköy in Turkish) who were not affected by the 1923 population exchange between Greece and Turkey since the islands were under the rule of the Kingdom of Italy at the time (from 1912) and who became Greek citizens after 1947 when the islands became part of Greece.

The Turks in Kos are organized around Turkish Muslim Association of Kos ("İstanköy Türk Müslüman Derneği") which gives the figure 2,000 for the population they bring together and represent for their island.[2]

Those in Rhodes are organized around the Turkish Association of Rhodes (Rodos Türk Derneği), which gives the figure 3,500 for the population they bring together and represent for their island.[3]

The Turkish terms used for the members of the community can vary depending on different specifications, such as "Oniki Ada Türkleri" for the exact equivalent of the term "Turks of the Dodecanese", or either "Rodos Türkleri" or "İstanköy Türkleri" depending on whether they are from Rhodes or Kos, or "Giritli" (Cretans in Turkish) since some had emigrated to the Dodecanese in the process of the adhesion of Crete to Greece or due to cultural similarities with Cretan Turks, or "Adalı" to denote the general meaning of "Islanders".