Turks in the Netherlands

Turks in the Netherlands

Until 1961, more people left the Netherlands than moved into the country. It began to face a labour shortage by the mid 1950s, which became more serious during the early 1960s, as the country experienced economic growth rates compareable to the rest of Europe.[7] At the same time, Turkey had a problem of unemployment, low GNP levels and high population rates. So the import of labour solved problems on both ends.[8] The first Turkish immigrants arrived in the Netherlands in the beginning of the 1960s at a time were the Dutch economy was wrestling with a shortage of workers.[9] On 19 August 1964, the Dutch government entered into a 'recruitment agreement' with Turkey.[10] Thereafter, the number of Turkish workers in the Netherlands increased rapidly.[11]

There were two distinct periods of recruitment. During the first period, which lasted until 1966, a large number of Turks came to the Netherlands through unofficial channels. An economic recession began in 1966. Some of the labour migrants were forced to return to Turkey. In 1968, the economy picked up again and a new recruitment period, which was to last until 1974, commenced. The peak of Turkish labour migration occurred during these years. The Turks surpassed other nationalities in numbers and came to represent the Dutch image of guest workers.[12]

Most Turks came to the Netherlands in order to work and save enough money to build a house, expand the family business or start their own business in Turkey. Thus, the decision to emigrate was made primarily for economic reasons. Most of the labour migrants did not come from the lowest strata of the Turkish population, nor did emigration begin in the least developed parts of Turkey, but in the big cities such as Istanbul, Ankara and Izmir. Only later did less urbanised areas become involved with the immigration process. Ultimately, the largest numbers of Turks did come from these areas. Most Turks in the Netherlands come from villages and provincial cities in the middle of the country and on the coast of the Black Sea.[13]

At the end of 1973, the recruitment was nearly brought to a halt, and the Turks were no longer admitted to the Netherlands as labour migrants. Turkish immigration, however, continued practically unabatedly through the process of family reunification.[14] Even more Turkish men began to bring their families to the Netherlands in the 1970s. In the first half of the 1980s, the Turkish net immigration began to decreased- but in 1985, it unexpectedly began to rise again. Most of them had a bride or bridegroom come over from their native land. This marriage immigration still continues, though net immigration has again decreased in the 1990s.[15]

Turks often worked overtime and led abstemious lives in order to save as much money as possible. This circumstance contributed to the fact that their integration into Dutch society was, to a large extent, limited to the work area. However, Turks became a more visible community in the 1970-80s when more Dutch and Turkish families became neighbours. With the arrival of families, infrastructure grew; in addition to boarding houses and coffee shops, the Turks also opened bakeries, groceries, butchers shops, travel agencies, videos stores, driving schools, prayer rooms and mosques.[16]

See also: Demographics of the Netherlands 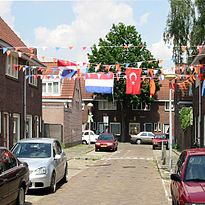 Turkish flag and Dutch flag hanging side by side in the multi-ethnic neighborhood Kruidenbuurt, Eindhoven.

Turkish immigrants first began to settle in big cities in the Netherlands such as Amsterdam, Rotterdam, The Hague and Utrecht as well as the regions of Twente and Limburg, where there was a growing demand for industrial labour. However, not only the capital cities but also medium-sized cities, and even small villages attracted the Turks.[17]

The Turkish population is mostly concentrated in large cities in the west of the country[18] some 36% of Turks live in the Randstad region.[19] The second most common settlements are in the south, in the Limburg region, in Eindhoven and Tilburg, and in the east, in Twente region, in Enschede, Deventer, and Almelo.[20]

The official estimates of the Turkish immigrant population in the Netherlands does not include Turkish minorities whose origins go back to the Ottoman Empire. In the Netherlands, there are also Bulgarian Turks and Western Thracian Turks. These populations, which have different nationalities, share the same ethnic, linguistic, cultural and religious origins as Turkish nationals.

See also: Turks of Western Thrace and Greeks in the Netherlands

A minority of Western Thrace Turks can be found in the Netherlands, especially in the Randstad region. They are registered as Greeks due to their Greek nationality. After Germany, the Netherlands is the most popular destination for Turkish immigrants from Western Thrace.[32]

See also: Languages of the Netherlands

The first generation of Turkish immigrants is predominantly Turkish-speaking and has only limited Dutch competence.[33] Thus, for immigrant children, their early language input is Turkish, but the Dutch language quickly enters their lives via playmates and day-care centres. By age six, these children are often bilinguals with their Turkish and Dutch language systems.[34]

Adolescents have developed a code-switching mode which is reserved for in-group use. With older members of the Turkish community and with strangers, Turkish is used, and if Dutch speakers enter the scene, a switch to Dutch is made.[35] The young bilinguals therefore speak normal Turkish with their elders, and a kind of Dutch-Turkish with each other.[36] 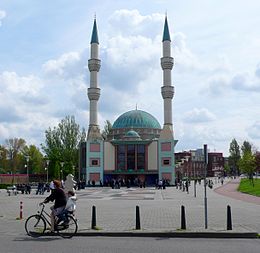 The Turkish Mevlana Mosque in Rotterdam was voted the most attractive building in 2006.

When family reunification resulted in the establishment of Turkish communities, the preservation of Turkish culture became a more serious matter. Most Turks consider Islam to be the centre of their culture.[37] Thus, the majority of Dutch Turks adheres to Sunni Islam, although there is also a considerable Alevi fragment. According to the latest figures issued by Statistics Netherlands, approximately 5% of the Dutch population (850,000 persons), were followers of Islam in 2006. Furthermore, 87% of Turks were followers of Islam.[38] The Turkish community accounted for almost 40% of the Muslim population; thus are the largest ethnic group in the Netherlands adhering to Islam.[39]

Turks are considered to be the best organised ethnic group with its activities and organisations.[40] The Turkish Islamic Cultural Federation (TICF) which was founded in 1979, had 78 member associations by the early 1980s, and continued to grow ro reach 140 by the end of the 1990s. It works closely with the Turkish-Islamic Union for Religious Affairs (Diyanet), which provides the TICF with the imams which it employs in its member mosques.[41]

In April 2006, the Turkish Mevlana Mosque had been voted the most attractive building in Rotterdam in a public survey organsied by the City Information Centre. It had beaten the Erasmus Bridge due to the mosques 'symbol of warmth and hospitality'.[42]

See also: Politics of the Netherlands

Turks generally support parties on the left (PvdA, D66, GroenLinks, and SP) over parties on the right (CDA, VVD and SGP).[43] In the past, migrants were not as eager to vote, however they are now aware that they can become a decisive factor in the Dutch political system. There has been some criticisms that certain parties (such as the Social Democrats) are becoming the parties of migrants because of the votes they receive from migrants and the increase in the number of elected Turkish candidates.[44] During the Dutch general election (2002), there were 14 candidates of Turkish origin spread out over six party lists which encouraged 55% of Turks to vote, which was a much higher turnout than any other ethnic minorities.[45]

A number of Turkish-Dutch writers have come to prominence. Halil Gür was one of the earliest, writing short stories about Turkish immigrants. Sadik Yemni is well known for his Turkish-Dutch detective stories. Sevtap Baycili is a more intellectual novelist, who is not limited to migrant themes.