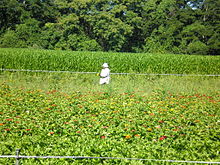 Foreign workers in the United States

The term foreign worker refers to those who fall the reason it was into two specific cases.

Guest workers are persons who typically travel (either legally or illegally) to a country with much more preferred job prospects than the one in which they currently reside. These "workers" temporarily reside in the country in which they work and will often send most or all wages earned, back to their country of origin.

Foreign workers in other countries

Sometimes, a host country sets up a program in order to invite guest workers, as did the Federal Republic of Germany from 1955 until 1973, when over one million guest workers (German: Gastarbeiter) arrived, mostly from Italy, Spain and Turkey.

Although there have been disagreements over immigration in the broader sense (the current system facilitated with green cards). Most controversy in the United States since 1990 has been in regard to "guest workers" both legal and illegal.

In recent years in the United States, there has been much controversy over whether H-1B visas (a particular instance of guest worker), intended to bring highly skilled workers to fill gaps in the domestic labor pool, are instead being used to bring in skilled, but otherwise unexceptional, economic migrants as cheap labor to fill jobs that could readily be filled domestically. There is much controversy over pending legislation that would allow unskilled labor to enter the country for this same reason.

Foreign students coming into the US are also migrant workers. They may face large salary differences until the obtention of their green card as their visa is only company-specific. Moreover, they are barred from many high-profile jobs where citizenship is a prerequisite.

Again, specific to the H-1B visas,countries such as India, Pakistan, and the Philippines have long experienced a brain drain of highly skilled workers to countries like the United States, Britain, Canada, France, Japan, South Korea, Germany, and Australia. While the absolute number of such émigrés are not large, the economic implications of such very skilled workers are significant.

Sometimes, citizens of countries with heavily urbanized areas have migrated to more agrarian countries in order to find jobs as farmers and such. For more on this, see migrant workers.

In certain less tolerant nations, foreign workers may be abused and treated as second-class citizens by the governments and/or lack of unions to assert worker rights, although a counterargument could be made in that foreigners do not deserve to be treated as full citizens as long as they are accorded basic human rights and civil liberties. For instance, in many Asian nations, it is common for employers to withhold passports from their employees, thus preventing the foreign worker from returning home.[citation needed] In conjunction with the withholding of salaries, it is meant to put the foreign workers in very difficult situation (particularly because the laws of these countries are typically not sympathetic to foreigners in practice). In the UK, organisations such as Kalayaan protect the rights of UK migrant domestic workers. (The term "migrant domestic worker" is a standardized term, where the word "domestic" is taken to mean "within the home," rather than its more prevalent meaning of being of or belonging to a particular sovereign state.)