The White Wagtail (Motacilla alba) is a small passerine bird in the wagtail family Motacillidae, which also includes the pipits and longclaws. This species breeds in much of Europe and Asia and parts of north Africa. It is resident in the mildest parts of its range, but otherwise migrates to Africa. It has a toehold in Alaska as a scarce breeder. In some areas, notably Britain and Ireland, the sub-species Pied Wagtail (M. a. yarrellii) predominates.

This is an insectivorous bird of open country, often near habitation and water. It prefers bare areas for feeding, where it can see and pursue its prey. In urban areas it has adapted to foraging on paved areas such as car parks. It nests in crevices in stone walls and similar natural and man-made structures.

The White Wagtail is the national bird of Latvia.[2] 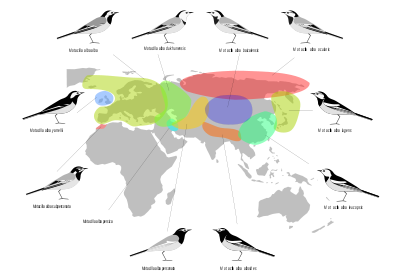 Breeding ranges of the major races

The White Wagtail was one of the many species originally described by Linnaeus in his 18th century work, Systema Naturae, and it still bears its original name of Motacilla alba.[3] The Latin genus name originally meant "little mover", but certain medieval writers thought it meant "wag-tail", giving rise to a new Latin word cilla for "tail".[4] The specific epithet alba is Latin for "white".

Within the wagtail genus Motacilla, the White Wagtail's closest relatives appear to be other black-and-white wagtails such as the Japanese Wagtail, Motacilla grandis, and the White-browed Wagtail, Motacilla madaraspatensis, (and possibly the Mekong Wagtail, Motacilla samveasnae, the phylogenetic position of which is mysterious) with which it appears to form a superspecies. However mtDNA cytochrome b and NADH dehydrogenase subunit 2 sequence data suggests that the White Wagtail is itself polyphyletic or paraphyletic (i.e. the species is not itself a single coherent grouping).[5] Other phylogenetic studies using mtDNA however suggest that there is considerable gene flow within the races and the resulting closeness makes Motacilla alba a single species.[6] Some studies have suggested the existence of only two groups : the alboides group, with M. a. alboides, M. a. leucopsis and M. a. personata; and the alba group, with M. a. alba, M. a. yarrellii, M. a. baicalensis, M. a. ocularis, M. a. lugens, and M. a. subpersonata.[7]

Willy Wagtail was a colloquial name used in the Isle of Man, replacing the older name ushag vreck,[8] as well as a common name used in Northern Ireland.[9]

This is a slender bird, 16.5–19 cm (6½–7½ in) in length (East Asian subspecies are longer, to 21 cm (8¼ in), with the characteristic long, constantly wagging tail of its genus. The nominate subspecies Motacilla alba alba is basically grey above and white below, with a white face, black cap and black throat.

There are a number of other subspecies, some of which may have arisen because of partial geographical isolation, such as the resident British form, the Pied Wagtail M. a. yarrellii, which now also breeds in adjacent areas of the neighbouring European mainland. Pied Wagtail, named for naturalist William Yarrell, exchanges the grey colour of the nominate form with black (or very dark grey in females), but is otherwise identical in its behaviour. Other subspecies, the validity of some of which is questionable, differ in the colour of the wings, back, and head, or other features. Some races show sexual dimorphism during the breeding season. As many as six subspecies may be present in the wintering ground in India or Southeast Asia and here they can be difficult to distinguish.[10][11][12][13] Phylogenetic studies using mtDNA suggest that some morphological features have evolved more than once including the back and chin colour. Breeding M. a. yarrellii look much like the nominate race except for the black back, and M. a. alboides of the Himalayas differs from the Central Asian M. a. personata only by its black back. M. a. personata has been recorded breeding in the Siddar Valley of Kashmir of the Western Himalayas.[14] It has also been noted that both back and chin change colour during the pre-basic moult; all black-throated subspecies develop white chins and throats in winter and some black-backed birds are grey-backed in winter.[6][10]

The call of the White Wagtail is a sharp chisick, slightly softer than the version given by Pied Wagtail. The song is a pleasant twittering, more regular in White than Pied, but with little territorial significance, since the male uses a series of contact calls to attract the female.[15]

Nine or eleven subspecies are currently recognised. Information on the plumage differences and distribution of the subspecies of White Wagtail is shown below.[16] 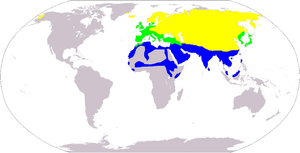 This species breeds throughout Eurasia up to latitudes 75°N, only being absent in the Arctic from areas where the July isotherm is less than 4 °C. It also breeds in the mountains of Morocco and western Alaska. It occupies a wide range of habitats, but is absent from deserts.[15]

White Wagtail is resident in the milder parts of its range such as western Europe and the Mediterranean, but migratory in much of the rest of its range. Northern European breeders winter around the Mediterranean and in tropical and subtropical Africa,[21] and Asiatic birds move to the Middle East, India,[17] and SouthEast Asia.[22] Birds from the North American population also winter in tropical Asia.[23]

This species has a large range, with an estimated gextent of more than 10 million km² (3.8 sq mi). The population size is unknown, but it is believed to be large, as the species is described as "common" in at least parts of its range. Population trends have not been quantified, but the species is not believed to approach the thresholds for the population decline criterion of the IUCN Red List (i.e. declining more than 30% in ten years or three generations). For these reasons, the species is evaluated as Least Concern.[1] The population in Europe appears to be stable.[21] The species has adapted well to human changes to the environment, and has in fact exploited human changes such as man-made structures which are used for nesting sites and increased open areas which are used for foraging.[17]. In a number of cities, notably Dublin, large flocks gather in winter to roost.

The most conspicuous habit of this species is a near-constant tail wagging, a trait that has given the species, and indeed the genus, its common name. In spite of the ubiquity of this behaviour, the reasons for it are poorly understood. It has been suggested that it may flush prey, or signal submissiveness to other wagtails. A recent study has suggested instead that it is a signal of vigilance to potential predators.[24]

The exact composition of the diet of White Wagtails varies by location, but terrestrial and aquatic insects and other small invertebrates form the major part of the diet. These range from beetles, dragonflies, small snails, spiders, worms, crustaceans, to maggots found in carcasses and, most importantly, flies in the order Diptera.[17] Small fish fry have also been recorded in the diet. The White Wagtail is somewhat unusual in the parts of it range where it is non-migratory as it is an insectivorous bird that continues to feed on insects during the winter (most other insectivorous birds in temperate climates migrate or switch to more vegetable matter).[25]

White Wagtails are monogamous and defend breeding territories.[17] The breeding season for most is from April to August, with the season starting later further north. Both sexes are responsible for building the nest, with the male responsible for initiating the nest building and the female for finishing the process. For second broods in the subspecies personata the female alone builds the nest as the male is still provisioning the young.[26] which is a rough cup assembled from twigs, grass, leaves and other plant matter. It is lined with soft materials, including animal hair. The nest is set into a crevice or hole; traditionally in a bank next to a river or ditch, but the species has also adapted to nesting in walls, bridges and buildings. One nest was found in the skull of a walrus. They species will nest in association with other animals, particularly where available the dams of beavers and also inside the nests of Golden Eagles.[26] Around 3-8 eggs are laid, with the usual number being 4-6. Its eggs are cream-coloured, often with a faint bluish-green or turquoise tint, and heavily spotted with reddish brown; they measure, on average, 21 x 15 mm (0.83 x 0.59 inches).[27] Both parents incubate the eggs, although the female generally does so for longer and incubates at night. The eggs begin to hatch after 12 days (sometimes as late as 16 days). Both parents feed the chicks until they fledge at around 14 days, and the chicks are fed for another week after fledging.

Though it is known to be a host species for the Common Cuckoo, the White Wagtail typically deserts its nest if it has been parasitised. Scientists theorise that this occurs because the wagtail is too small to push the intruding egg out of the nest, and too short-billed to destroy the egg by puncturing it.[28]