The Maxwell–Boltzmann distribution describes particle speeds in gases, where the particles do not constantly interact with each other but move freely between short collisions. It describes the probability of a particle's speed (the magnitude of its velocity vector) being near a given value as a function of the temperature of the system, the mass of the particle, and that speed value. This probability distribution is named after James Clerk Maxwell and Ludwig Boltzmann.

Physical applications of the Maxwell–Boltzmann distribution

The Maxwell–Boltzmann distribution applies to ideal gases close to thermodynamic equilibrium with negligible quantum effects and at non-relativistic speeds. It forms the basis of the kinetic theory of gases, which explains many fundamental gas properties, including pressure and diffusion.

Note that sometimes the above equation is written without the degeneracy factor gi. In this case the index i will specify an individual state, rather than a set of gi states having the same energy Ei. Because velocity and speed are related to energy, Equation 1 can be used to derive relationships between temperature and the speeds of molecules in a gas. The denominator in this equation is known as the canonical partition function.

Distribution for the momentum vector

What follows is a derivation wildly different from the derivation described by James Clerk Maxwell and later described with fewer assumptions by Ludwig Boltzmann. Instead it is close to Boltzmann's later approach of 1877.

For the case of an "ideal gas" consisting of non-interacting atoms in the ground state, all energy is in the form of kinetic energy, and gi is constant for all i. The relationship between kinetic energy and momentum for massive particles is

where p2 is the square of the momentum vector p = [px, py, pz]. We may therefore rewrite Equation 1 as:

where Z is the partition function, corresponding to the denominator in Equation 1. Here m is the molecular mass of the gas, T is the thermodynamic temperature and k is the Boltzmann constant. This distribution of Ni/N is proportional to the probability density function fp for finding a molecule with these values of momentum components, so:

The normalizing constant c, can be determined by recognizing that the probability of a molecule having any momentum must be 1. Therefore the integral of equation 4 over all px, py, and pz must be 1.

It can be shown that:

The distribution is seen to be the product of three independent normally distributed variables px, py, and pz, with variance mkT. Additionally, it can be seen that the magnitude of momentum will be distributed as a Maxwell–Boltzmann distribution, with

. The Maxwell–Boltzmann distribution for the momentum (or equally for the velocities) can be obtained more fundamentally using the H-theorem at equilibrium within the kinetic theory framework.

Distribution for the energy

Using p² = 2mE, and the distribution function for the magnitude of the momentum (see below), we get the energy distribution:

Since the energy is proportional to the sum of the squares of the three normally distributed momentum components, this distribution is a gamma distribution and a chi-squared distribution with three degrees of freedom.

The Maxwell–Boltzmann distribution can also be obtained by considering the gas to be a type of quantum gas.

Distribution for the velocity vector

which is the Maxwell–Boltzmann velocity distribution. The probability of finding a particle with velocity in the infinitesimal element [dvx, dvy, dvz] about velocity v = [vx, vy, vz] is

Like the momentum, this distribution is seen to be the product of three independent normally distributed variables vx, vy, and vz, but with variance

. It can also be seen that the Maxwell–Boltzmann velocity distribution for the vector velocity [vx, vy, vz] is the product of the distributions for each of the three directions:

where the distribution for a single direction is

Distribution for the speed 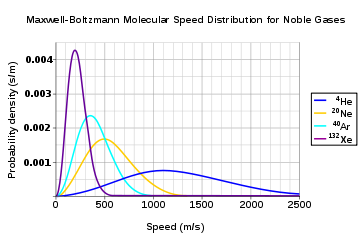 The speed probability density functions of the speeds of a few noble gases at a temperature of 298.15 K (25 °C). The y-axis is in s/m so that the area under any section of the curve (which represents the probability of the speed being in that range) is dimensionless.

Usually, we are more interested in the speeds of molecules rather than their component velocities. The Maxwell–Boltzmann distribution for the speed follows immediately from the distribution of the velocity vector, above. Note that the speed is

and the increment of volume is

We are often more interested in quantities such as the average speed of the particles rather than the actual distribution. The mean speed, most probable speed (mode), and root-mean-square can be obtained from properties of the Maxwell distribution.

Relative speed is defined as

is the most probable speed. The distribution of relative speeds allows comparison of dissimilar gasses, independent of temperature and molecular weight.

Although the above equation gives the distribution for the speed or, in other words, the fraction of time the molecule has a particular speed, we are often more interested in quantities such as the average speed rather than the whole distribution.

The most probable speed, vp, is the speed most likely to be possessed by any molecule (of the same mass m) in the system and corresponds to the maximum value or mode of f(v). To find it, we calculate df/dv, set it to zero and solve for v:

Where R is the gas constant and M = NA m is the molar mass of the substance.

The mean speed is the mathematical average of the speed distribution

The root mean square speed, vrms is the square root of the average squared speed:

The typical speeds are related as follows: 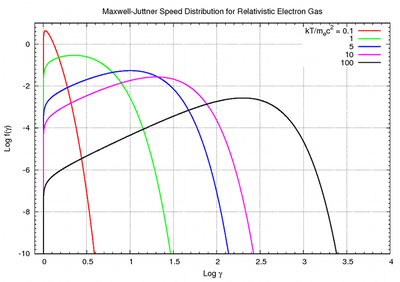 As the gas becomes hotter and kT approaches or exceeds mc2, the probability distribution for

in this relativistic Maxwellian gas is given by the Maxwell–Juttner distribution[2]:

and K2 is the modified Bessel function of the second kind.

Alternatively, this can be written in terms of the momentum as

. The Maxwell–Juttner equation is covariant, but not manifestly so, and the temperature of the gas does not vary with the gross speed of the gas.[3]