McCune–Albright syndrome, described in 1937 by Donovan James McCune and Fuller Albright,[1][2][3] is a genetic disorder of bones, skin pigmentation and hormonal problems along with premature puberty.

It is suspected when two of the three following features are present:

Within the syndrome there are bone fractures and deformity of the legs, arms and skull, different pigment patches on the skin, and early puberty with increased rate of growth.

Polyostotic fibrous dysplasia has different levels of severity. For example one child may be entirely healthy with no outward evidence of bone or endocrine problems, enter puberty at close to the normal age and have no unusual skin pigmentation. The complete opposite of that would be children who are diagnosed in early infancy with the obvious bone disease and obvious increased endocrine secretions from several glands.

The syndrome shows a broad spectrum of severity. The disease frequently involves the skull and facial bones, pelvis, spine and shoulder girdle. The sites of involvement are the femur (91%), tibia (81%), pelvis (78%), ribs, skull and facial bones (50%), upper extremities, lumbar spine, clavicle, and cervical spine, in decreasing order of frequency. The craniofacial pattern of the disease occurs in 50% of patients with the polyostotic form of fibrous dysplasia.

Genetically, there is a post-zygotic mutation of the gene GNAS1, which is involved in G-protein signalling.[4] This mutation, often a mosaicism, prevents downregulation of cAMP signalling. 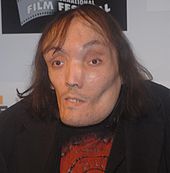 Mauricio Saravia, a Uruguayan poet with the disease

The disease made headlines in December, 2005 when a Haitian teen afflicted with the disease, Marlie Casseus, underwent a 17-hour emergency surgical procedure to remove a 7 kg (16 pound) tumour-like growth of bone from her face. A series of operations at Holtz Children's Hospital in Miami, Florida restored the child's face to a more normal proportion.[5]