Cherubism is a rare genetic disorder that causes prominence in the lower portion in the face. The name is derived from the temporary chubby-cheeked resemblance to putti, often confused with cherubs, in Renaissance paintings.

The appearance of people with the disorder is caused by a loss of bone in the mandible which the body replaces with excessive amounts of fibrous tissue. In most cases, the condition fades as the child grows, but in a few even rarer cases the condition continues to deform the affected person's face. Cherubism also causes premature loss of the primary teeth and uneruption of the permanent teeth.

The disease Cherubism is a rare autosomal dominant disease of the maxilla and mandible. Approximately 200 cases have been reported by medical journals with the majority being males. The name originates from the chubby faced angels or Cherubs of the renaissance era paintings. Cherubism is usually first diagnosed around age 7 and continues through puberty and may or may not continue to advance with age.[1] The degrees of Cherubism vary from mild to severe. Osteoclastic and osteoblastic remodeling contributes to the change of normal bone to fibrous tissue and cyst formation. As noted by the name, the patient's face becomes enlarged and disproportionate due to the fibrous tissue and atypical bone formation. The sponge-like bone formations lead to early tooth loss and permanent tooth eruption problems. The disease also affects the orbital area, creating an upturned eye appearance. The cause of cherubism is believed to be traced to a genetic defect resulting from a mutation of the SH3BP2 gene from chromosome 4p16.3.[2] While the disease is rare and painless, the afflicted suffer the emotional trauma of disfigurement. The affects of Cherubism may also interfere with normal jaw motion and speech. Currently, removal of the tissue and bone by surgery is the only treatment available. This disease is also one of the few that unexpectedly stops and regresses.[3] Normal bone remodeling activity may resume after puberty. Further research is needed to understand the mechanisms responsible for Cherubism, as well as potential treatments[citation needed].

Cherubism was first written about in 1933. All that was known at the time was the characteristic swelling pattern and the increase and then regress of bone lesions. It was later found that this disease is autosomal dominantly linked, meaning the displayed phenotype is determined by the dominant allele while the normal allele is recessive. One copy of the dominant allele is enough to cause the disorder. Because the disease was found to be dominant the diseased phenotype tends to be seen in every generation at some level of severity. Therefore afflicted fathers or mothers of children with Cherubism pass the phenotype to both daughters and sons.[3] Cherubism has also been found from the random mutation of a gene in an individual having no family history of the disease. However it is not well understood why males tend to express the disease more frequently. The disease is expressed at a rate of 80 to 100% of all affected. Yet children with Cherubism vary in severity in their maxilla and mandible bony lesions. The cause of Cherubism is believed to be from a mutation of gene of SH3BP2. Cherubism has also been found combined with other genetic disorders including Noonan syndrome, Ramon syndrome, and Fragile X syndrome.[4] Mutations of the SH3BP2 gene are only reported in 75% of Cherubism cases.[2] The mutation of the SH3BP2 gene is believed to increase production of over active proteins from this gene. The SH3BP2 gene is found on the smaller arm of chromosome 4 at position 16.3.[2] The SH3BP2 protein is involved with chemical signaling to immune system cells known as macrophages and B cells. Because osteoclasts are also macrophages, this protein plays an active role in production and activation of osteoclasts and bone reabsorbtion. Osteoclasts also sense the increased inflammation of the mandible and maxilla and are activated to break down bone structures. Bone loss and inflammation lead to increased fibrous tissue and cyst growth. The cyst growth leads to the enlarged yet painless condition. The bone reabsorbtion is performed by the osteoclast. The osteoclast removes the mineralized matrix and collagen by secreting enzymes. The osteoclast is one large cell that has multiple nuclei and high concentration of vesicles and vacuoles. A special membrane that contacts the bone is called the ruffled border. This border maintains the enzymes and increases the surface area contacting the bone. The hydroxyapatite is the mineral part of the bone that includes phosphate and calcium ions which are absorbed by endocytosis and released into the extracellular fluid. The formation of osteoclasts is dependent on receptor activator of nuclear factor kB (RANK Ligand) and macrophage colony-stimulating factor (M-CSF).[5] The formation of osteoclasts is directly dependent on their precursors contact with membrane bound proteins.[5] When osteoclasts are activated they travel by chemo taxis throughout the bone. The ability of the osteoclast to attach is enabled by specific motifs of Arg-Gly-Asp which hold positive, neutral, and negative charges respectively.[5] Cathepsin K is the major protease that degrades collagen and noncollagenous proteins. Cathepsin B, C, D, E, G, and L are also expressed. Matrix metalloproteinases (MMPs) are also secreted and are believed to be important in osteoclast migration.[5] Parathyroid hormone as well as growth factor interleukin regulates osteoclasts by balancing the calcium levels in blood and bone. Increased parathyroid hormone is known to make osteoclasts break down and release more calcium into the extracellular fluid. Osteoblast activity is unable to keep up with the osteoclast activity and lesions are formed.[6] Osteoblasts are unrelated to osteoclasts.[5]

Cherubism is displayed with genetic conformation and when excessive osteoclasts are found in the affected areas of the mandible and Maxilla. Large cysts will be present with excessive fibrous areas inside the bone. The fibers and cysts will be found among the trabecula of the Coronoid process, the ramus of mandible, the body of mandible and the maxilla regions. The maxilla will be affected up to and including the orbits and sometimes inside the lower orbits.[7] The maxilla and zygomatic bones are depressed and eyes appear to gaze upward.[8] The maxilla has been found to be more severely affected in most cases than the mandible bone. Some patients found with lower inner orbital growths and cysts may lose vision. 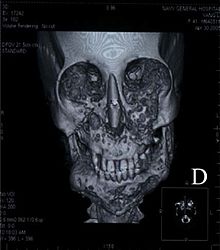 The disease is usually diagnosed when dental abnormalities are found. These abnormalities include premature deciduous teeth and abnormal growth of permanent teeth due to displacement by cysts and lesions. The only definite way to correctly diagnose the disease is by sequence analysis of the SH3BP2 gene. The gene has been found to have mis-sense mutation in exon 9.[3] Initial study of the patient is usually conducted using x-ray and CT scans. Neurofibromatosis may resemble Cherubism and may accompany the disease. Genetic testing is the final diagnosis tool.

Because Cherubism changes and improves over time the treatment should be individually determined. Generally moderate cases are watched until they subside or progress into the more severe range. Severe cases may require surgery to eliminate bulk cysts and fibrous growth of the maxilla and mandible. Surgical bone grafting of the cranial facial bones may be successful on some patients. Surgery is preferred for patients ages 5 to 15.[1] Special consideration should be taken when operating on the face to avoid the marginal mandibular branch of the facial nerve as well as the zygomatic branch of the facial nerve. Unintentional damage to these nerves can decrease muscle strength in the face and mandible region. Orthodontic treatment is generally required to avoid permanent dental problems arising from malocclusive bite, misplaced, and unerupted permanent teeth.[1] Orthodontic treatment may be used to erupt permanent teeth that have been unable to descend due to lesions and cysts being in their path of eruption. In patients with orbital issues of diploia, globe displacement, and visual loss will require ophthalmologic treatment.[1]

Since this disease is genetically linked genetic counseling may be the only way to decrease occurrences of Cherubism. The lack of severity of symptoms of the parents may be cause for failure to recognize the disorder. The optimal time to be tested for mutations is prior to having children. The disease results from a genetic mutation and this gene has been found to spontaneously mutate. Therefore there may be no prevention techniques available.

The face displays emotions and is the major form of communication method we use. The slightest amount of disfigurement of the face is easily noticed. While the Cherubism is not accompanied with pain the need to help children and adults afflicted is apparent. Because this disease is associated with the time of tooth eruption the disease may be helpful in discovering what factors of tooth eruption contribute to Cherubism. The disease is also useful in defining roles of the genes involved in disorganizing osteoclast activity. Further research of the mechanisms responsible for Cherubism could lead to discoveries and cures for many other bone diseases such as osteoporosis.

Mutations in the SH3BP2 gene have been identified in about 80 percent of people with cherubism. In most of the remaining cases, the genetic cause of the condition is unknown. The SH3BP2 gene provides instructions for making a protein whose exact function is unclear. The protein plays a role in transmitting chemical signals within cells, particularly cells involved in the replacement of old bone tissue with new bone (bone remodeling) and certain immune system cells.

Mutations in the SH3BP2 gene lead to the production of an overly active version of this protein. The effects of SH3BP2 mutations are still under study, but researchers believe that the abnormal protein disrupts critical signaling pathways in cells associated with the maintenance of bone tissue and in some immune system cells. The overactive protein likely causes inflammation in the jaw bones and triggers the production of osteoclasts, which are cells that break down bone tissue during bone remodeling. An excess of these bone-eating cells contributes to the destruction of bone in the upper and lower jaws. A combination of bone loss and inflammation likely underlies the cyst-like growths characteristic of cherubism.

This condition is inherited in an autosomal dominant pattern, which means one copy of the altered gene in each cell is sufficient to cause the disorder.[9] In some cases, an affected person inherits the mutation from one affected parent. Other cases may result from new mutations in the gene. These cases occur in people with no history of the disorder in their family.