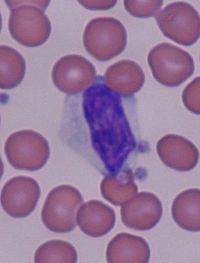 Reactive lymphocytes are lymphocytes that become large as a result of antigen stimulation. Typically they can be more than 30 µm in diameter with varying size and shape.

The nucleus of a reactive lymphocyte can be round, elliptic, indented, cleft or folded. The cytoplasm is often abundant and can be basophilic. Vacuoles and/or azurophilic granules are also sometimes present. Most often the cytoplasm is gray, pale blue or deep blue in colour.

The distinctive cell associated with EBV or CMV is known as a "Downey cell", after Hal Downey, who contributed to the characterization of it in 1923.[1][2] It is sometimes erroneously called a "Downy cell".[3]

Reactive lymphocytes are usually associated with viral illnesses, however, they can also be present as a result of drug reactions (such as phenytoin), immunisations, radiation, hormonal causes (such as stress and Addison's disease) as well as some auto-immune disorders (such as rheumatoid arthritis).

Some pathogen-related causes include: