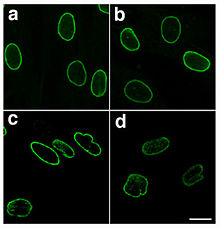 Normal nuclear lamina (a and b) and mutant nuclear lamina (c and d) from a patient with HGPS, visualized by immunofluorescence - note the irregular and bumpy shape of the laminopathic nuclei[1]

Laminopathies and other nuclear envelopathies have a large variety of clinical symptoms including skeletal and/or cardiac muscular dystrophy, lipodystrophy and diabetes, dysplasia, dermo- or neuropathy, leukodystrophy, and progeria (premature aging). Most of these symptoms develop after birth, typically during childhood or adolescence. Some laminopathies however may lead to an early death, and mutations of lamin B (LMNB1 gene) may be lethal before or at birth.[3]

Patients with classical laminopathy have mutations in the gene coding for lamin A/C (LMNA gene).

More recently, mutations in lamin B (LMNB2 gene) or genetic defects leading to changes in lamin B abundance were identified as cause for laminopathies.

Mutations implicated in other nuclear envelopathies were found in genes coding for lamin-binding proteins such as lamin B receptor (LBR gene), emerin (EMD gene) and LEM domain-containing protein 3 (LEMD3 gene) and prelamin-processing enzymes such as the zinc metalloproteinase STE24 (ZMPSTE24 gene).

The nuclear envelopathy with the highest frequency in human populations is Emery-Dreifuss muscular dystrophy caused by an X-linked mutation in the EMD gene coding for emerin and affecting an estimated 1 in 100,000 people.

Messenger RNA produced from the LMNA gene undergoes alternative splicing and is translated into lamins A and C. Lamin A undergoes farnesylation to attach a membrane anchor to the protein. This version of the protein is also referred to as prelamin A. Farnesylated prelamin A is further processed into mature lamin A by a metalloproteinase removing the last 15 amino acids and its farnesylated cysteine. This allows lamin A to dissociate from the nuclear envelope membrane and fulfill nuclear functions. Mutations causing laminopathies interfere with these processes on different levels.

Missense mutations in the lamin A/C rod and tail domains are the cause for a wide array of genetic disorders, suggesting that lamin A/C protein contains distinct functional domains that are essential for the maintenance and integrity of different cell lineages. Interaction between lamin A and the nuclear envelope protein emerin appears to be crucial in muscle cells, with certain mutations in lamin mimicking mutations in emerin and causing Emery-Dreifuss muscular dystrophy. Different mutations lead to dominant-negative and recessive alleles. Mutations in the lamin rod domain leading to mislocalization of both lamin A and emerin occur in patients with autosomal dominant forms of muscular dystrophy and cardiomyopathy.

Most lamin B mutations appear to be lethal with mutations in lamin B1 causing death at birth in mice.[3] In 2006, lamin B2 missense mutations were identified in patients with acquired partial lipodystrophy.[6]

Mutations causing progeria are defective in splicing LMNA mRNA, therefore producing abnormal lamin A protein, also known as progerin. The mutations activate a cryptic splice site within exon 11 of the gene, thereby causing the deletion of the processing site on prelamin A.[7] This results in an accumulation of progerin that is unable to mature into lamin A, leading to misshapen nuclei. Missplicing also leads to the complete or partial loss of exon 11 and results in a truncated prelamin A protein in the neonatal lethal tight skin contracture syndrome.[8]

Since the metalloproteinase STE24 is required to process prelamin A into mature lamin A, mutations in this gene abolishing protease activity cause defects similar to laminopathies caused by prelamin A with truncated processing sites. Symptoms in patients with ZMPSTE24 mutation range from mandibuloacral dysplasia, progeroid appearance, and generalized lipodystrophy to infant-lethal restrictive dermopathy.

In the case of autosomal dominant leukodystrophy, the disease is associated with a duplication of the lamin B gene LMNB1. The exact dosage of lamin B in cells appears to be crucial for nuclear integrity as increased expression of lamin B causes a degenerative phenotype in fruit flies and leads to abnormal nuclear morphology.[9]

Antibodies against lamin B have been implicated in autoimmune diseases and are possibly involved in multiple sclerosis.[9]

Currently, there is no cure for laminopathies and treatment is largely symptomatic and supportive. Physical therapy and/or corrective orthopedic surgery may be helpful for patients with muscular dystrophies. Cardiac problems that occur with some laminopathies may require a pacemaker. Treatment for neuropathies may include medication for seizures and spasticity.

The recent progress in uncovering the molecular mechanisms of toxic progerin formation in laminopathies leading to premature aging has opened up the potential for the development of targeted treatment. The farnesylation of prelamin A and its pathological form progerin is carried out by the enzyme farnesyl transferase. Farnesyl transferase inhibitors (FTIs) can be used effectively to reduce symptoms in two mouse model systems for progeria and to revert the abnormal nuclear morphology in progeroid cell cultures. Two oral FTIs, lonafarnib and tipifarnib, are already in use as anti-tumor medication in humans and may become avenues of treatment for children suffering from laminopathic progeria. Nitrogen-containing bisphosphate drugs used in the treatment of osteoporosis reduce farnesyldiphosphate production and thus prelamin A farnesylation. Testing of these drugs may prove them to be useful in treating progeria as well. The use of antisense oligonucleotides to inhibit progerin synthesis in affected cells is another avenue of current research into the development of anti-progerin drugs.[10][11]