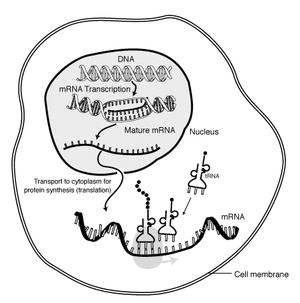 The "life cycle" of an mRNA in a eukaryotic cell. RNA is transcribed in the nucleus; processed, it is transported to the cytoplasm and translated by the ribosome. At the end of its life, the mRNA is degraded.

Messenger RNA (mRNA) is a molecule of RNA encoding a chemical "blueprint" for a protein product. mRNA is transcribed from a DNA template, and carries coding information to the sites of protein synthesis: the ribosomes. Here, the nucleic acid polymer is translated into a polymer of amino acids: a protein. In mRNA as in DNA, genetic information is encoded in the sequence of nucleotides arranged into codons consisting of three bases each. Each codon encodes for a specific amino acid, except the stop codons, which terminate protein synthesis. This process requires two other types of RNA: Transfer RNA (tRNA) mediates recognition of the codon and provides the corresponding amino acid, whereas ribosomal RNA (rRNA) is the central component of the ribosome's protein-manufacturing machinery.

Transcription is when DNA makes RNA. During transcription, RNA polymerase makes a copy of a gene from the DNA to mRNA as needed. This process is similar in eukaryotes and prokaryotes. One notable difference, however, is that prokaryotic RNA polymerase associates with mRNA-processing enzymes during transcription so that processing can proceed quickly after the start of transcription. The short-lived, unprocessed or partially processed, product is termed pre-mRNA; once completely processed, it is termed mature mRNA.

Processing of mRNA differs greatly among eukaryotes, bacteria, and archea. Non-eukaryotic mRNA is, in essence, mature upon transcription and requires no processing, except in rare cases. Eukaryotic pre-mRNA, however, requires extensive processing.

A 5' cap (also termed an RNA cap, an RNA 7-methylguanosine cap, or an RNA m7G cap) is a modified guanine nucleotide that has been added to the "front" or 5' end of a eukaryotic messenger RNA shortly after the start of transcription. The 5' cap consists of a terminal 7-methylguanosine residue that is linked through a 5'-5'-triphosphate bond to the first transcribed nucleotide. Its presence is critical for recognition by the ribosome and protection from RNases.

Cap addition is coupled to transcription, and occurs co-transcriptionally, such that each influences the other. Shortly after the start of transcription, the 5' end of the mRNA being synthesized is bound by a cap-synthesizing complex associated with RNA polymerase. This enzymatic complex catalyzes the chemical reactions that are required for mRNA capping. Synthesis proceeds as a multi-step biochemical reaction.

Splicing is the process by which pre-mRNA is modified to remove certain stretches of non-coding sequences called introns; the stretches that remain include protein-coding sequences and are called exons. Sometimes pre-mRNA messages may be spliced in several different ways, allowing a single gene to encode multiple proteins. This process is called alternative splicing. Splicing is usually performed by an RNA-protein complex called the spliceosome, but some RNA molecules are also capable of catalyzing their own splicing (see ribozymes).

In some instances, an mRNA will be edited, changing the nucleotide composition of that mRNA. An example in humans is the apolipoprotein B mRNA, which is edited in some tissues, but not others. The editing creates an early stop codon, which, upon translation, produces a shorter protein.

Polyadenylation is the covalent linkage of a polyadenylyl moiety to a messenger RNA molecule. In eukaryotic organisms, most messenger RNA (mRNA) molecules are polyadenylated at the 3' end. The poly(A) tail and the protein bound to it aid in protecting mRNA from degradation by exonucleases. Polyadenylation is also important for transcription termination, export of the mRNA from the nucleus, and translation. mRNA can also be polyadenylated in prokaryotic organisms, where poly(A) tails act to facilitate, rather than impede, exonucleolytic degradation.

Polyadenylation occurs during and immediately after transcription of DNA into RNA. After transcription has been terminated, the mRNA chain is cleaved through the action of an endonuclease complex associated with RNA polymerase. After the mRNA has been cleaved, around 250 adenosine residues are added to the free 3' end at the cleavage site. This reaction is catalyzed by polyadenylate polymerase. Just as in alternative splicing, there can be more than one polyadenylation variant of a mRNA.

Another difference between eukaryotes and prokaryotes is mRNA transport. Because eukaryotic transcription and translation is compartmentally separated, eukaryotic mRNAs must be exported from the nucleus to the cytoplasm. Mature mRNAs are recognized by their processed modifications and then exported through the nuclear pore. In neurons, mRNA must be transported from the soma to the dendrites where local translation occurs in response to external stimuli.[1] Many messages are marked with so-called "zip codes," which target their transport to a specific location.[2]

Eukaryotic mRNA that has been processed and transported to the cytoplasm (i.e., mature mRNA) can then be translated by the ribosome. Translation may occur at ribosomes free-floating in the cytoplasm, or directed to the endoplasmic reticulum by the signal recognition particle. Therefore, unlike in prokaryotes, eukaryotic translation is not directly coupled to transcription.

The 5' cap is a modified guanine nucleotide added to the "front" (5' end) of the pre-mRNA using a 5'-5'-triphosphate linkage. This modification is critical for recognition and proper attachment of mRNA to the ribosome, as well as protection from 5' exonucleases. It may also be important for other essential processes, such as splicing and transport.

Coding regions are composed of codons, which are decoded and translated (in eukaryotes usually into one and in prokaryotes usually into several) proteins by the ribosome. Coding regions begin with the start codon and end with a stop codon. In general, the start codon is an AUG triplet and the stop codon is UAA, UAG, or UGA. The coding regions tend to be stabilised by internal base pairs, this impedes degradation.[3][4] In addition to being protein-coding, portions of coding regions may serve as regulatory sequences in the pre-mRNA as exonic splicing enhancers or exonic splicing silencers.

The stability of mRNAs may be controlled by the 5' UTR and/or 3' UTR due to varying affinity for RNA degrading enzymes called ribonucleases and for ancillary proteins that can promote or inhibit RNA degradation.

Cytoplasmic localization of mRNA is thought to be a function of the 3' UTR. Proteins that are needed in a particular region of the cell can also be translated there; in such a case, the 3' UTR may contain sequences that allow the transcript to be localized to this region for translation.

Some of the elements contained in untranslated regions form a characteristic secondary structure when transcribed into RNA. These structural mRNA elements are involved in regulating the mRNA. Some, such as the SECIS element, are targets for proteins to bind. One class of mRNA element, the riboswitches, directly bind small molecules, changing their fold to modify levels of transcription or translation. In these cases, the mRNA regulates itself.

The 3' poly(A) tail is a long sequence of adenine nucleotides (often several hundred) added to the 3' end of the pre-mRNA. This tail promotes export from the nucleus and translation, and protects the mRNA from degradation.

An mRNA molecule is said to be monocistronic when it contains the genetic information to translate only a single protein chain (polypeptide). This is the case for most of the eukaryotic mRNAs.[5][6] On the other hand, polycistronic mRNA carries several open reading frames (ORFs), each of which is translated into a polypeptide. These polypeptides usually have a related function (they often are the subunits composing a final complex protein) and their coding sequence is grouped and regulated together in an operon. Most of the mRNA found in bacteria and archea is polycistronic.[5] Dicistronic or bicistronic is the term used to describe an mRNA that encodes only two proteins.

In eukaryotes it is thought that mRNA molecules form circular structures due to an interaction between the cap binding complex and poly(A)-binding protein.[7] Circularization is thought to promote recycling of ribosomes on the same message leading to efficient translation.

Different mRNAs within the same cell have distinct lifetimes (stabilities). In bacterial cells, individual mRNAs can survive from seconds to more than an hour; in mammalian cells, mRNA lifetimes range from several minutes to days. The greater the stability of an mRNA the more protein may be produced from that mRNA. The limited lifetime of mRNA enables a cell to alter protein synthesis rapidly in response to its changing needs. There are many mechanisms that lead to the destruction of a mRNA, some of which are described below.

In general, in prokaryotes the lifetime of mRNA is much shorter than in eukaryotes. Prokaryotes degrade messages by using a combination of ribonucleases, including endonucleases, 3' exonucleases, and 5' exonucleases. In some instances, small RNA molecules (sRNA) tens to hundreds of nucleotides long can stimulate the degradation of specific mRNAs by base-pairing with complementary sequences and facilitating ribonuclease cleavage. It was recently shown that bacteria also have a sort of 5' cap consisting of a triphosphate on the 5' end.[8] Removal of two of the phosphates leaves a 5' monophosphate, causing the message to be destroyed by the endonuclease RNase E.

Inside eukaryotic cells, there is a balance between the processes of translation and mRNA decay. Messages that are being actively translated are bound by ribosomes, the eukaryotic initiation factors eIF-4E and eIF-4G, and poly(A)-binding protein. eIF-4E and eIF-4G block the decapping enzyme (DCP2), and poly(A)-binding protein blocks the exosome complex, protecting the ends of the message. The balance between translation and decay is reflected in the size and abundance of cytoplasmic structures known as P-bodies[9] The poly(A) tail of the mRNA is shortened by specialized exonucleases that are targeted to specific messenger RNAs by a combination of cis-regulatory sequences on the RNA and trans-acting RNA-binding proteins. Poly(A) tail removal is thought to disrupt the circular structure of the message and destabilize the cap binding complex. The message is then subject to degradation by either the exosome complex or the decapping complex. In this way, translationally inactive messages can be destroyed quickly, while active messages remain intact. The mechanism by which translation stops and the message is handed-off to decay complexes is not understood in detail.

The presence of AU-rich elements in some mammalian mRNAs tends to destabilize those transcripts through the action of cellular proteins that bind these sequences and stimulate poly(A) tail removal. Loss of the poly(A) tail is thought to promote mRNA degradation by facilitating attack by both the exosome complex[10] and the decapping complex.[11] Rapid mRNA degradation via AU-rich elements is a critical mechanism for preventing the overproduction of potent cytokines such as tumor necrosis factor (TNF) and granulocyte-macrophage colony stimulating factor (GM-CSF).[12] AU-rich elements also regulate the biosynthesis of proto-oncogenic transcription factors like c-Jun and c-Fos.[13]

Eukaryotic messages are subject to surveillance by nonsense mediated decay (NMD), which checks for the presence of premature stop codons (nonsense codons) in the message. These can arise via incomplete splicing, V(D)J recombination in the adaptive immune system, mutations in DNA, transcription errors, leaky scanning by the ribosome causing a frame shift, and other causes. Detection of a premature stop codon triggers mRNA degradation by 5' decapping, 3' poly(A) tail removal, or endonucleolytic cleavage.[14]

In metazoans, small interfering RNAs (siRNAs) processed by Dicer are incorporated into a complex known as the RNA-induced silencing complex or RISC. This complex contains an endonuclease that cleaves perfectly complementary messages to which the siRNA binds. The resulting mRNA fragments are then destroyed by exonucleases. siRNA is commonly used in laboratories to block the function of genes in cell culture. It is thought to be part of the innate immune system as a defense against double-stranded RNA viruses.[15]

MicroRNAs (miRNAs) are small RNAs that typically are partially complementary to sequences in metazoan messenger RNAs.[16] Binding of a miRNA to a message can repress translation of that message and accelerate poly(A) tail removal, thereby hastening mRNA degradation. The mechanism of action of miRNAs is the subject of active research.[17]

There are other ways by which messages can be degraded, including non-stop decay and silencing by Piwi-interacting RNA (piRNA), among others.