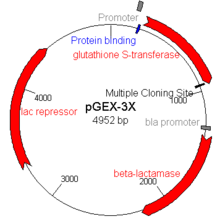 The pGEX-3x plasmid is a popular cloning vector.

A cloning vector is a small piece of DNA into which a foreign DNA fragment can be inserted. The insertion of the fragment into the cloning vector is carried out by treating the vehicle and the foreign DNA with a restriction enzyme that creates the same overhang, then ligating the fragments together. There are many types of cloning vectors. Genetically engineered plasmids and bacteriophages (such as phage λ) are perhaps most commonly used for this purpose. Other types of cloning vectors include bacterial artificial chromosomes (BACs) and yeast artificial chromosomes (YACs).

Most commercial cloning vectors have key features that have made their use in molecular biology so widespread.

In the case of expression vectors, the main purpose of these vehicles is the controlled expression of a particular gene inside a convenient host organism (e.g. E. coli). Control of expression can be very important; it is usually desirable to insert the target DNA into a site that is under the control of a particular promoter. Some commonly used promoters are T7 promoters, lac promoters (bla promoter) and cauliflower mosaic virus's 35s promoter (for plant vectors).

To allow for convenient and favorable insertions, most cloning vectors have had nearly all their restriction sites engineered out of them and a synthetic multiple cloning site (MCS) inserted that contains many restriction sites. MCSs allow for insertions of DNA into the vector to be targeted and possibly directed in a chosen orientation. A selectable marker, such as an antibiotic resistance [e.g. beta-lactamase (see figure)] is often carried by the vector to allow the selection of positively transformed cells (see Screening below). All plasmids must carry a functional origin of replication (ORI; not shown in figure).

Some other possible features present in cloning vectors are: vir genes for plant transformation, integrase sites for chromosomal insertion, lacZα fragment for α complementation and blue-white selection, and/or reporter genes in frame with and flanking the MCS to facilitate the production of recombinant proteins [e.g. fused to the Green fluorescent protein (GFP) or to the glutathione S-transferase (see figure)].

Screening: example of the blue/white selection

Many general purpose vectors such as pUC19 usually include a system for detecting the presence of a cloned DNA fragment, based on the loss of an easily scored phenotype. The most widely used is the gene coding for E. coli β-galactosidase, whose integrity can easily be detected by the ability of the enzyme it encodes to hydrolyze the soluble, colourless substrate X-gal (5-bromo-4-chloro-3-indolyl-beta-d-galactoside) into an insoluble, blue product (5,5'-dibromo-4,4'-dichloro indigo). Cloning a fragment of DNA within the vector-based gene encoding the β-galactosidase prevents the production of an active enzyme. If X-gal is included in the selective agar plates, transformant colonies are generally blue in the case of a vector with no inserted DNA and white in the case of a vector containing a fragment of cloned DNA.