The common eland (Taurotragus oryx) (Swahili:Mbunga[4]), also known as the southern eland or eland antelope, is a savannah and plains antelope found in East and Southern Africa. It is the largest antelope in the African continent. It is native to Botswana, Burundi, Congo, Ethiopia, Kenya, Lesotho, Malawi, Mozambique, Namibia, Rwanda, South Africa, South Sudan, Swaziland, Tanzania, Uganda, Zambia and Zimbabwe; and is possibly extinct in Angola.[5]

The name "eland" is derived from the Dutch word for elk.[6] When Dutch settlers came to the Cape Province they named the largest wild ruminant herbivore they met with the name of the huge northern herbivore. In Dutch the animal is called "Elandantelope" to distinguish it from the elk, which is found in the northern boreal forests. Its scientific name 'Taurotragus oryx' is made of three Greek words- tauros (a bull), tragos (a he-goat)and orux (a gazelle or antelope).

The elands are most active in the morning and late afternoon, lying sheltered in the heat of the day. They're commonly found in large herds, with no dispersion during the rainy season. They live in large mixed groups, usually containing 25-70 individuals, though up to 400 have been observed. An average size group herd with juveniles is approximately 50 individuals.[16] Males use to stay in bushier areas when the females and juveniles move into the plains to feed on the grasses. As a rule also, the groups of males are smaller than those of females and juveniles. Some of its main predators include lion, cape hunting dog, leopard and spotted hyena. 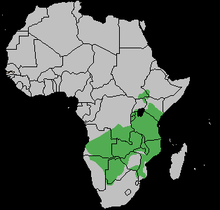 Distribution of the common eland over the savannas and plains in eastern and southern Africa.

Common eland live in terrestrial systems, on the open plains of southern Africa and along the foothills of the great South African plateau. The species extends north into Ethiopia, to the east into western Angola and Namibia, most arid zones of Sudan and now even into South Africa (Lydon). However, there is low density of elands in Africa due to poaching, human settlement etc. There are at least 3 elands/sq mi (1.2/km2).[17] Now it has been reintroduced in Zimbabwe also. Elands prefer to live in semi-arid areas that contain many shrub-like bushes, and often inhabit grasslands, woodlands, sub-desert, bush and mountaintops up to 15,000 ft (4600 m). Elands do, however, avoid forests, swamps, and deserts.[18]

As a herbivore, elands usually eat grass, branches and leaves.[14] They are diurnal and nocturnal but tend to be inactive during the heat of day. The common eland has an unusual social life, leaving or joining herds as necessary without forming close ties. The size and power of the bull eland generally (but not always) discourages predators, but females are thought to be more vulnerable to attack.[20] The common eland would walk long distances for water resources if unavailable in its surrounding.[21] They switch to grazing in the early rainy season. According to a study, grasses made up over 45% of the eland's diet in December 1988 when it was only 6.3% the month before. Many experiments showed that eland are able to readily adapt to changes in seasonal patterns. Yet another observation made in 1985 till 1986 showed that eland were one of the few antelopes who did not regularly use a newly flooded plain where there was an abundance of grasses, rather they preferred to stay in to bushier areas that were more suitable to browsers and only seemed to use the flood plain for shade and water. As they quickly adjust to the surroundings due to seasonal changes and other causes, they also change their feeding habits. They prefer eating vegetation like cross-berry (Grewia occidentalis), and scientists conclude that due to some kind of evolutionary adaptation the large antelope can survive on lower quality food in times of little rain. Elands feed during night in hot weather and always for a very long time, and sleep long in daytime. Elands also feed on foliage and a variety of seeds, seedpods, herbs, and tubers.[17] Like its distant gazelle and oryx relatives, the eland can conserve water by raising its body temperature as much as 7° Celsius (13.5° Fahrenheit) on hot days.[14]

Females have sexual maturity at 15–36 months and males at 4–5 years. Mating may occur anytime after reaching sexual maturity, especially observed during the rainy season. This is due to the gathering of all elands to feed on lush green plains full of grasses, in which some males and females start mating each other in separate groups.[22] Males chase the females in order to know if she is in estrus by testing her urine. Usually a female chooses the most prevailing and fit male to mate with. Sometimes she runs away from attracted males trying to mate, causing more attraction. This even results into fights between attracted males, in which the hard horns help strongly. Males usually keep close contact with females in the mating period. Females are able of conceiving at the age of 2.5.[17] Females have a gestation period of 9 months, and at once she can give birth to 1 calf only.[23]

There are 3 different social groups[24]- the first one is the males group, the smallest one living close to each other and sticking firmly over a particular food or water source. The males group are always roaming and are not stable. Secondly, the female group is much larger in size and covers greater areas. It travels around the plains full of grass in wet periods and during the dry periods it prefers bushy areas. In a recent experiment it was found that females have a complex linear hierarchy. it is often thought that it is the mother which gives certain female's dominance. Thirdly are the nursery groups, which is naturally formed when females give birth to calves. In no more than 24 hours the mother and calf join this group. The calves start befriending each other and stay back in the nursery group while the mother returns to the female group. The calves leave the nursery group when they are at least 2 years old and join the males and females group as per as their sex.

Currently, elands are not endangered and are conserved by the U.S. Endangered Species Act, or regulated in international trade by CITES.[25] As per the IUCN, it is said that citing various authors, indicates that population density estimates obtained by aerial counts in areas where the species is moderately common generally range from about 0.05 - 0.4/km². Higher density estimates (0.6-1.0/km²) have been obtained by aerial counts. Ground surveys or total counts of areas where the species is common have produced similar density estimates. produced a total population estimate of 136,000, with stable/increasing national populations are now confined to Namibia, Botswana, Zimbabwe, South Africa, Malawi and possibly Tanzania. Population trends vary from increasing to decreasing within individual protected areas, and are generally increasing on private land and decreasing in other areas.[26]

About the conservation status, IUCN says that about half of this estimated total population occurs in protected areas and 30% on private land . Protected areas that support major populations include Omo (Ethiopia), Serengeti, Katavi, Ruaha and Selous-Kilombero (Tanzania), Kafue and North Luangwa (Zambia), Nyika (Malawi), Etosha (Namibia), Kgalagadi Transfrontier Park (Botswana/South Africa) and Ukhahlamba Drakensberg Park (South Africa). Most of these populations appear to be stable. Relatively large numbers of the common eland now occur on private land, particularly in Namibia, Zimbabwe and South Africa, reflecting its value as a trophy animal. Common elands have also been widely domesticated in Zimbabwe, South Africa and Kenya, as well as in Russia, Ukraine, and England[27]

Yet the population is gradually decreasing due to habitat loss (due to expanding human settlements) and poaching for its superior meat. As they are docile and inactive most of the time they can be easily killed.[28] 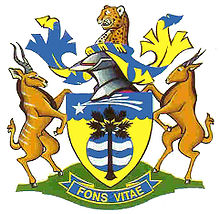 Common elands in the logo of the Coat of arms of Grootfontein, Namibia.

Common eland are sometimes farmed and/or hunted for their meat, and in some cases can be better utilized than cattle due to their being more suited to their natural habitat. This has led to some Southern African farmers switching from cattle to eland. Common elands are also pictured as supporters in the logo of the Coat of arms of Grootfontein, Namibia.