In the past, taxonomists had put impalas in the same tribe as gazelles, kobs and hartebeests. However, it was found that the impala was so different from any of these tribes that it was put in its own tribe, Aepycerotini. This tribe has now been elevated to full subfamily status.

Usually, two subspecies are distinguished, which is supported by mitochondrial DNA analysis[3]: 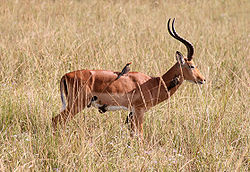 Impala range between 73 and 92 cm (29 and 36 in) tall. Average mass for a male impala is 46 to 76 kg (100 to 170 lb), while females weigh about 35 to 50 kg (77 to 110 lb). They are normally reddish-brown in color (hence the Afrikaans name of "Rooibok"), have lighter flanks and white underbellies with a characteristic "M" marking on the rear. Males, referred to as rams, have lyre-shaped horns, which can reach up to 90 centimeters in length. Females, referred to as ewes, have no horns. The black impala, found in very few places in Africa, is an extremely rare type. A recessive gene causes the black colouration in these animals.

Impalas are an ecotone species living in light woodland with little undergrowth and grassland of low to medium height.[4] They have an irregular distribution due to dependence on free water, soils with good drainage with firm footing and moderate or less slope.[4] While they are usually close to water in the dry season, they can go weeks without drinking when they have access to green vegetation.[4]

Impalas are adaptable foragers. They usually switch between grazing and browsing depending on the season. During wet seasons when grasses are green and growing they graze.[4] During dry seasons it browses foliage, shoots, forbs and seeds.[4] It can also adapt to different habitats by being a grazer in one habitat a browser in another.[5] Leopards, cheetahs, lions and wild dogs prey on impala.

Females and young form herds of up to two hundred individuals. When food is plentiful, adult males will establish territories. Females pass through the territories that have the best food resources.[6] Territorial males round up any female herds that enter their grounds,[4][6] and will chase away bachelor males that follow.[4][6] They will even chase away recently-weaned males. A male impala tries to prevent any female from leaving his territory. During the dry seasons, territories are abandoned, as herds must travel farther to find food. Large, mixed tranquil herds of females and males form. Young male impalas who have been made to leave their previous herd form bachelor herds of around thirty individuals. Males that are able to dominate their herd are contenders for assuming control of a territory.

The breeding season of impalas, also called rutting, begins toward the end of the wet season in May. The entire affair typically lasts approximately three weeks. While young are usually born after 6–7 months,[7] the mother has the ability to delay giving birth for an additional month if conditions are harsh. When giving birth, a female impala will isolate herself from the herd,[7] despite numerous attempts by the male to keep her in his territory.[8] The impala mother will keep the fawn in an isolated spot for a few days or even leave it lying out in hiding for a few days, weeks, or more before returning to the herd.[4] There, the fawn will join a nursery group and will go to its mother only to nurse and when predators are near.[4] Fawns are suckled for four to six months.[4] Males who mature are forced out of the group and will join bachelor herds.[4]

When frightened or startled, the whole herd starts leaping about to confuse their predator. They can jump distances more than 10 meters (33 ft) and 3 meters (9 ft) high. Impalas can reach running speeds of about 80 to 90 km/h (50 to 56 mph),[9][10] to escape their predators. When escaping from predators, they can release a scent from their glands on their heels, which can help them stay together. This is done by performing a high kick of their hind legs.[citation needed]

The Common Impala is one of the most abundant antelopes in Africa, with about one-quarter of the population occurring in protected areas.[1] The largest numbers occurring in areas such as the Masai Mara and Kajiado (Kenya), Serengeti, Ruaha and Selous (Tanzania), Luangwa Valley (Zambia), Okavango (Botswana), Hwange, Sebungwe and the Zambezi Valley (Zimbabwe), Kruger National Park (South Africa) and on private farms and conservancies (South Africa, Zimbabwe, Botswana and Namibia).[11] The rare Black-faced impalas survive in Etosha National Park and private farms in Namibia.[1]