The pudús (Mapudungun püdü or püdu)[3] are two species of South American deer from the genus Pudu; the world's smallest deer.[4] The name is a loanword from Mapudungun the language of the indigenous Mapuche people of southern Chile.[5] The two species of pudús are the Northern Pudú (Pudu mephistophiles) from Colombia, Ecuador, and Peru, and the Southern[6] or Chilean Pudú (Pudu puda; sometimes incorrectly modified to Pudu pudu[7]) from southern Chile and southwestern Argentina.[8] Pudús range in size from 32 to 44 centimeters (13 to 17 in) tall and up to 85 centimeters (33 in) long.[9] As of 2009, both species are classified as Vulnerable in the IUCN Red List.[1][2]

The genus Pudu was first erected by English naturalist John Edward Gray in 1850. Pudua was a Latinized version of the name proposed by Alfred Henry Garrod in 1877 but ruled invalid. They are classified in the New World deer subfamily Capreolinae within the deer family Cervidae. The term "pudú" itself is derived from the Mapuche people of the Chilean region and translates to 'the people of southern Chile'.[5] Because they live on the slopes of the Andes Mountain Range, they are also known as the "Chilean mountain goat".[10]

The pudús are the world's smallest deer, with the Southern Pudú being slightly larger than the Northern Pudú.[4] It has a stocky frame supported by four short and slender legs. It is 32 to 44 centimeters (13 to 17 in) high at the shoulder and up to 85 centimeters (33 in) in length. Pudús normally weigh up to 12 kilograms (26 lb),[9] but the highest recorded weight of a pudú is 13.4 kilograms (30 lb).[5] Pudús have small, black eyes,[4] black noses, and rounded ears with lengths of 7.5 to 8 centimeters (3.0 to 3.1 in). Sexual dimorphism in the species includes an absence of antlers in females. Males have short, spiked antlers that are not forked, as seen in most species of deer. The antlers, which are shed annually,[13] can extend from 6.5 to 7.5 centimeters (2.6 to 3.0 in) in length and protrude from between the ears.[9] Also on the head are large preorbital glands. Pudús have small hooves, dewclaws, and a short tail about 4 to 4.5 centimeters (1.6 to 1.8 in) in length when measured without hair. Coat coloration varies with season, gender, and individual genes. The fur is long and stiff, typically pressed close to the body, with a reddish brown to dark brown hue.[14] The neck and shoulders of an aged pudú turn a dark gray-brown in the winter.[9]

The pudús inhabits temperate rainforests in South America, where the dense underbrush and bamboo thickets offer protection from predators.[15] Southern Chile, southwest Argentina, Chiloé Island, and northwest South America are home to the deer.[5][9] The Northern Pudú is found in the Northern Andes of Colombia, Ecuador, and Peru, from 2,000 to 4,000 meters (6,600 to 13,000 ft) above sea level. The Southern species is found in the slope of the Southern Andes from sea level to 2,000 meters (6,600 ft).

The climate of the pudú's habitat is composed of two main seasons: a damp, moderate winter and an arid summer. Annual precipitation in these areas of Argentina and Chile ranges from 2 to 4 meters (6.6 to 13 ft).[16]

The pudú is a solitary animal whose behavior in the wild is largely unknown because of its secretive nature.[17] Pudús are nocturnal and diurnal, but are mostly active in the morning, late afternoon, and evening. Their home range generally extends about 16 to 25 hectares (40 to 62 acres), much of which consists of crisscrossing pudú-trodden paths. Each pudú has its own home range, or territory.[16] A single animal's territory is marked with sizable dung piles found on paths and near eating and resting areas. Large facial glands for scent communication allow correspondence with other pudú deer.[13] Pudús do not interact socially, other than to mate.[16] An easily frightened animal, the deer barks when in fear.[10][18] Its fur bristles and the pudú shivers when angered.[10]

Predators of the pudús include the Horned owl, Andean fox, Magellan fox, cougar, and other small cats. The pudú is a wary animal that moves slowly and stops often, smelling the air for scents of predators. Being a proficient climber, jumper, and sprinter, the deer flees in a zigzag path when being pursued.[19] The longevity of the pudús ranges from 8 to 10 years in the wild.[18] The longest recorded life span is 15 years and 9 months. However, such longevity is rare and most pudús die at a much younger age. These deer die from a wide range of causes. Maternal neglect as newborns as well as a wide range of diseases can decrease the population.[5] A popular rumor is that if alarmed to a high degree pudús die from fear-induced cardiac complications.[10]

The pudús are herbivorous,[10] consuming vines, leaves from low trees, shrubs, succulent sprouts, herbs, ferns, blossoms, buds, tree bark, and fallen fruit.[16][20][21] They can survive without drinking water for long periods due to the high water content of the succulent foliage in their diet.[4]

Pudús have various methods of obtaining the foliage they need. Their small stature and cautious nature create obstacles in attaining food.[21] They stop often while searching for food to stand on their hind legs and smell the wind, detecting food scents.[16][19] Females and fawns peel bark from saplings using their teeth, but mature males may use their spikelike antlers. The deer may use their front legs to press down on saplings until they snap or become low enough to the ground so that the pudús can reach the leaves. Forced to stand on their hind legs due to their small size, the deer climb branches and tree stumps to reach higher foliage.[13] They bend bamboo shoots horizontally in order to walk on them and eat from higher branches.[16] 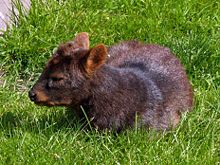 Pudús are solitary and only come together for rut. Mating season is in the Southern Hemisphere autumn, from April to May.[15] Pudú DNA is arranged into 70 chromosomes.[5] To mate, the pudú male rests his chin on the female's back, then sniffs her rear before mounting her from behind, holding her with his forelegs.[16] The gestation period ranges from 202 to 223 days (around 7 months) with the average being 210 days.[5] A single offspring or sometimes twins are born in austral spring, from November to January.[15][18] Newborns weigh 700 to 1,000 grams (25 to 35 oz) with the average birth weight being 890 grams (31 oz).[5][9] Newborns less than 600 grams (21 oz) or more than 1,000 grams (35 oz) die. Females and males weigh the same at birth.[5] Fawns have reddish brown fur and Southern Pudú fawns have white spots running the length of their back.[9] Young are weaned after 2 months. Females mature sexually in 6 months while males mature in 8–12 months.[13] Fawns are fully grown in 3 months but may stay with their mothers for 8 to 12 months.[15]

As of 2009[update], both species of pudús are classified as Vulnerable in the IUCN Red List,[2][22] mainly because of overhunting and habitat loss. Pudu puda is listed in CITES Appendix I, and Pudu mephistophiles is listed in CITES Appendix II.[23] The Southern species is more easily maintained in captivity than the Northern, though small populations of the Northern formerly existed in zoos.[5] As of 2010[update], more than 100 Southern Pudús are kept at ISIS registered institutions with the vast majority in European and US zoos.[24] Pudús are difficult to transport because they are easily overheated and stressed.[9] Pudús are protected in various national parks. Parks require resources in order to enforce protection of the deer.[15] 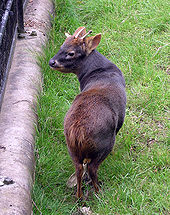 There are efforts to preserve the pudú species before they become extinct. An international captive breeding program for the Southern Pudú led by Concepcion University in Chile has been started.[13][25] Some deer have been bred in captivity and re-introduced into Nahuel Huapi National Park in Argentina.[9] Re-introduction efforts include the use of radio collars for tracking.[26] The Convention on International Trade in Endangered Species has banned the international trading of pudús.[15] The Wildlife Conservation Society protects their natural habitat and works to recreate it for pudús in captivity.[19] Despite efforts made by the World Wildlife Fund (WWF), the size of the pudú population remains unknown.[16] Threats to the pudús remain despite various conservation efforts.[15]

The pudús are threatened due to the destruction of their rainforest habitat. The land is cleared for human development, cattle ranching, agriculture, logging, and exotic tree plantations.[4][13][15] Habitat fragmentation and road accidents cause pudú deaths. They are taken from the wild as pets, as well as exported illegally.[9][15] They are overhunted and killed for food by specially trained hunting dogs.[4][15][26] The recently introduced red deer compete with pudús for food. Domestic dogs prey upon pudús and transfer parasites through contact. Pudús are very susceptible to diseases like bladder worms, lungworms, roundworms, and heartworms.[15][19]