Chevrotain
"kancil" redirects here. For car, see Perodua Kancil.
Not to be confused with deer mouse or Chevrotaine.

Chevrotains, also known as mouse deer, are small ungulates that make up the family Tragulidae, the only members of the infraorder Tragulina. There are 10 living (extant) species in three genera,[1][2] but there are also several species only known from fossils.[3] The extant species are found in forests in South and Southeast Asia, with a single species in the rainforests of Central and West Africa.[4] They are solitary or live in pairs, and feed almost exclusively on plant material.[4] Depending on exact species, the Asian species weigh between 0.7 and 8.0 kilograms (1.5 and 18 lb), and the smallest species are also the smallest ungulates in the world.[4] The African chevrotain is considerably larger at 7–16 kilograms (15–35 lb).[5]

The word 'chevrotain' itself is French, and can be translated as 'little goat'.

The Telugu name for the Indian Spotted Chevrotain is "Jarini Pandi", which literally means "a deer and a pig".[citation needed] The Konkani name for it is "Barinka".

The Sinhala name meeminna roughly translates to 'mouse-like deer'. This was used in the scientific name of one of the Sri Lankan species, M. memmina.

The family was widespread and successful from the Oligocene (34 million years ago) through the Miocene (about 5 million years ago), but has remained almost unchanged over that time and remains as an example of primitive ruminant form. They have a four-chambered stomach to ferment tough plant foods, but the third chamber is poorly developed. Though most species feed exclusively on plant material, the Water Chevrotain occasionally takes insects and crabs, or scavenge meat and fish.[10] Like other ruminants, they lack upper incisors, and give birth to only a single young.

In other respects, however, they have primitive features, closer to non-ruminants such as pigs. All species in the family lack horns, but both genders have elongated canine teeth. These are especially prominent in males where they project out on either side of the lower jaw, and are used in fights.[4] Their legs are short and thin, which leave them lacking in agility, but also helps to maintain a smaller profile to aid in running through the dense foliage of their environment. Other pig-like features include the presence of four toes on each foot, the absence of facial scent glands, premolars with sharp crowns, and the form of their sexual behaviour and copulation.[11] 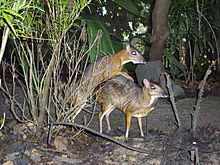 Some of the species show a remarkable affinity with water, often remaining submerged for prolonged periods to evade predators or other unwelcome intrusion. This has also lent support to the idea that whales evolved from water-loving creatures that looked like small deer.[12] 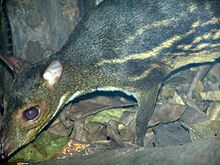 There are 6 extinct chevrotains genera[3] including:

The Hypertragulidae were closely related to the Tragulidae.