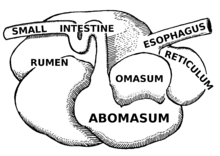 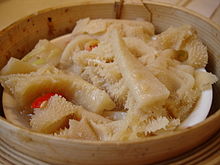 The omasum, also known as the bible[1], the fardel[1], the manyplies[1] and the psalterium[1], is the third compartment of the stomach in ruminants. Though its functions have not been well-studied, it appears to primarily aid in the absorption of water, magnesium, and the volatile fatty acids produced by rumen fermentation, that have not been absorbed into the bloodstream yet. The numerous folds of its mucosa are thought to trap digesta particles so the maximum amount of nutrients may be absorbed.