The Mikumi National Park is a national park in Mikumi, near Morogoro, Tanzania. The park was established in 1964, currently covers an area of 3230 km² and is the fourth largest in the country. The park is crossed by Tanzania A-7 highway.

The Mikumi is bordered to the south with the Selous Game Reserve, the two areas forming a unique ecosystem. Two other natural areas bordering the national park are the Udzungwa Mountains and Uluguru Mountains.

A lioness in the park 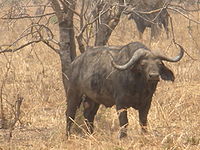 A wild buffalo in the park

The landscape of Mikumi is often compared to that of the Serengeti. The road that crosses the park divides it into two areas with partially distinct environments. The area north-west is characterized by the alluvial plain of the river basin Mkata. The vegetation of this area consists of savannah dotted with acacia, baobab, tamarinds, and some rare palm. In this area, at the furthest from the road, there are spectacular rock formations of the mountains Rubeho and Uluguru. The southeast part of the park is less rich in wildlife, and not very accessible.

The fauna includes many species characteristic of the African savannah. According to local guides at Mikumi, chances of seeing a lion who climbs a tree trunk is larger than in Manyara (famous for being one of the few places where the lions exhibit this behavior). The park contains a subspecies of giraffe, that biologists consider the link between the Masai giraffe and the Somali giraffe. Other animals in the park are elephants, zebras, gnu, impales, eland, kudu, black antelope, baboons, wildebeests and buffaloes. At about 5 km from the north of the park, there are two artificial pools inhabited by hippos. More than 400 different species of birds also inhabit the park.

The Mikumi belongs to the circuit of the wildlife parks of Tanzania, less visited by international tourists and better protected from the environmental point of view. Most of the routes that cross the Mikumi proceed in the direction of the Ruaha National Park and the Selous. The recommended season for visiting the park is the dry season between May and November.

It is noted that the Mikumi Snake Park Lodge which is supposedly rather unique in Tanzania as explained as follows: "The Mikumi Snake Park is located within the Genesis Motel Mikumi. The park has more than 50 different Tanzania snakes, and a well trained guide to explain to you the behavior of each snake". While it may be true that the snake park has many different snakes, some visitors have been rather appalled by the way the snakes are kept and treated by the park staff. However, this information may well need further verification.