Cyborgs are a prominent staple in the science fiction genre. This article summarizes notable instances of cyborgs in fiction.

In 1966, Kit Pedler, a medical scientist, created the Cybermen for the TV program Doctor Who, based on his concerns about science changing and threatening humanity. The Cybermen had replaced much of their bodies with mechanical prostheses and were now supposedly emotionless creatures driven only by logic.

Isaac Asimov's short story "The Bicentennial Man" explored cybernetic concepts. The central character is NDR, a robot who begins to modify himself with organic components. His explorations lead to breakthroughs in human medicine via artificial organs and prosthetics. By the end of the story, there is little physical difference between the body of the hero, now called Andrew, and humans equipped with advanced prosthetics, save for the presence of Andrew's artificial positronic brain. Asimov also explored the idea of the cyborg in relation to robots in his short story "Segregationist", collected in The Complete Robot.

The 1972 science fiction novel Cyborg, by Martin Caidin, told the story of a man whose damaged body parts are replaced by mechanical devices ("bionics"). This novel was adapted into a TV series, The Six Million Dollar Man, in 1973, and a spin-off, The Bionic Woman in 1976. Caidin also addressed bionics in his 1968 novel, The God Machine.

In 1974, Marvel Comics writer Rich Buckler introduced the cyborg Deathlok the Demolisher, and a dystopian post-apocalyptic future, in Astonishing Tales #25. Buckler's character dealt with rebellion and loyalty, with allusion to Frankenstein's monster, in a twelve-issue run. Deathlok was later resurrected in Captain America, followed by two others in 1990 and 1999.

In the novel Man Plus by Frederick Pohl, an able-bodied astronaut, Roger Torraway, is surgically altered in order to augment his fragile human body and allow him to function in the harsh climate of Mars. The result is both "monstrous" (he has bat-like wings, infrared sight, an enhanced brain capable of processing all the new sensory inputs) and "freeing" (his cyborg body is more "naturally" made for Mars, as opposed to his all-human colleagues on the Mars mission). Torraway's cyborg character is reprised in a 1995 sequel, Mars Plus.

The 1982 film Blade Runner featured creatures called replicants, bio-engineered or bio-robotic beings. The Nexus series—genetically designed by the Tyrell Corporation—are virtually identical to an adult human, but have superior strength, agility, and variable intelligence depending on the model. Because of their physical similarity to humans a replicant must be detected by its lack of emotional responses and empathy to questions posed in a Voight-Kampff test. A derogatory term for a replicant is "skin-job," a term heard again extensively in Battlestar Galactica. In the opening crawl of the film, they are first said to be the next generation in robotics. The crawl also states genetics play some role in the creation of replicants. The original novel makes mention of the biological components of the androids, but also alludes to the mechanical aspects commonly found in other material relating to robots.

The 1987 science fiction action film RoboCop features a cyborg protagonist. After being killed by a criminal gang, police officer Alex Murphy is transformed by a private company into a cyborg cop. The transformation is used to explore the theme of resurrection and identity. There are cyborg kaiju in the Godzilla films such as Gigan and Mechagodzilla.

Although frequently referred to onscreen as a cyborg, The Terminator might be more properly an android. While it has skin and blood (cellular organic systems), these serve mainly as a disguise and are not symbiotic with the machine components, a trait of true cyborgs. The endoskeletons beneath are fully functional robots and have been seen operating independently, especially during the future segments of the Terminator movies. The T-1000 (which is said to be made completely of a liquid metal) of Terminator 2: Judgment Day is definitely an android. The Terminator Cameron Phillips seen in the TV series Terminator: The Sarah Connor Chronicles is of a previously unseen model, and is once again referred to on screen (including once by another Terminator) as a cyborg. Terminator Salvation introduces Marcus Wright, a death-row convict who donated his body to Cyberdyne Systems, who was later revived as a one of a kind Terminator with his original brain and heart placed into an endoskeleton which was then covered by a copy of his original organic tissue.

Cyborgs have also been present in real-time strategy video games. The "Command & Conquer" video game series had cyborgs as a part of its plot - specifically Cyborgs created by the "Brotherhood of Nod" via Tiberium Infusion experimentation. They were frequently used for anti-personnel, though the Cyborg Commando proved to be useful in most situations. Cyborgs were brought back by the AI named LEGION, (a predecessor to CABAL) under direct orders from Kane. The 'Marked of Kane' units also contain Cyborgs.

The Metal Gear Solid series of video games has a recurring character known as Grey Fox or the "Cyborg Ninja" who is a person wearing a cybernetic exoskeleton (either worn as a suit or grafted directly to the character's body) and wielding a high-frequency blade.

The cyborg ninja suit has been donned by multiple characters, most recently by the character Raiden in Metal Gear Solid 4: Guns of the Patriots. He became the newest incarnation of the Cyborg Ninja after he was captured by The Patriots after he stole the body of Big Boss for the Paradise Lost Army. His body was heavily experimented on for the purpose of creating the ultimate soldier and the only remaining organic parts of his original body are his head and spinal cord. His cyborg body is composed of artificial muscle, organs, bones, and blood( a "white" artificial blood that the PLA substituted for his old, nanomachine primed blood). His cyborg body was optimized for war and enabled him to fight on a superhuman level and withstand what would normally be considered fatal injuries.

One of the most famous cyborgs is Darth Vader from the Star Wars films. Vader was once Anakin Skywalker, a famous Jedi turned to the Dark Side. After a furious battle with his former master, Obi-Wan Kenobi, Anakin is left for dead beside a lava flow on Mustafar, and is outfitted with an artificial life support system as well as robotic arms and legs. General Grievous, Lobot, and Luke Skywalker are the three other most prominent cyborgs in the Star Wars universe.

In Akira Toriyama's manga and anime series Dragon Ball, a scientist named Dr. Gero created several cyborgs, including villain Cell, sibling cyborgs Android 17 and Android 18, as well as Android 20, who was built from Gero himself.

A direct brain-to-computer interface is a valuable, but expensive, luxury in Larry Niven and Jerry Pournelle's novel Oath of Fealty.

In the manga and anime series Ghost in the Shell, Motoko Kusanagi is the fully prosthetic leader of an anti-terrorist force, who lives in a future Japan where the majority of adults are cyborgs and can connect wirelessly to the Internet for real-time communication and data research. The most common augmentation in the series were artificial brains called cyberbrains.

Bruce Sterling in his universe of Shaper/Mechanist suggested an idea of alternative cyborg called Lobster, which is made not by using internal implants, but by using an external shell (e.g. a Powered Exoskeleton).[1] Unlike human cyborgs that appear human externally while being synthetic internally, a Lobster looks inhuman externally but contains a human internally. The computer game Deus Ex: Invisible War prominently featured the Omar, where "Omar" is a Russian translation of the word "Lobster" (since the Omar are of Russian origin in the game).

In the Brain and Brawn series of novels series by Anne McCaffrey and others, beginning with The Ship Who Sang, a "brainship" is a human body, usually one that could not develop normally, encased in the strongest materials available in that universe, and mentally connected to the controls of a spacecraft. Later novels link the brainship to fully functional humanoid androids. 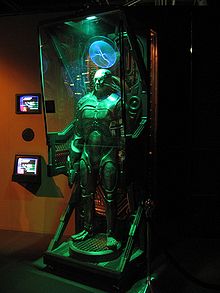 The Borg from Star Trek.

Media related to Cyborgs in fiction at Wikimedia Commons