Cable (Nathan Christopher Charles Summers) is a fictional character appearing in comic books published by Marvel Comics. The character first appeared as an infant in Uncanny X-Men #201 (January 1986). His adult identity of Cable, which was created by writer Louise Simonson and artist/co-writer Rob Liefeld, first appeared in The New Mutants #87 (March 1990), though he was not revealed to be the adult incarnation of the infant Nathan Summers until years later. He is the son of Scott Summers (Cyclops) and Madelyne Pryor, and was born in the present, but was sent into a distant future where he was raised. 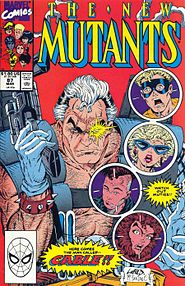 The character's first appearance was a cameo in The New Mutants #86 (Feb. 1990) followed by a full appearance in The New Mutants #87 (March 1990). Though the artist Rob Liefeld is responsible for his visual design, name, and much of his personality, it is claimed that Cable also got some inspiration from editor Bob Harras.[1] Liefeld explains the creation of the character:

Cable is first seen in conflict with Stryfe's Mutant Liberation Front,[3] the United States government, and Freedom Force.[4] The New Mutants intervened and he asked for their help against the Mutant Liberation Front.[5] Cable saw them as potential soldiers in his war against Stryfe. He became their new teacher and leader, and outfitted them.[6] He came into conflict with Wolverine,[7] noting that the two had an old feud between them. Cable and the New Mutants teamed up with Wolverine and Sunfire against the MLF.[8] Cable also led the New Mutants against the Genoshans.[9]

With the aid of Domino, Cable reorganized the New Mutants into X-Force.[10] The New Mutants ended with issue #100, with Cable and other characters then appearing the following month in X-Force #1.[10] The X-Force series provided further detail for the character's back story revealing that he was from the future and that he had traveled to the past with the aim of stopping Stryfe's plans as well as preventing Apocalypse's rise to power. Cable traveled between the 1990s and his future with his ship Graymalkin, which contained a sentient computer program called Professor, the future version of the program built into X-Factor's Ship.[volume & issue needed]

In 1992, the character had a two issue miniseries, titled Cable: Blood and Metal, written by Fabian Nicieza, pencilled by John Romita, Jr., and inked by Dan Green, published in October and November of that year. The series explored Cable and the villain Stryfe's ongoing battle with one another, and its effect on the people that surround Cable.

Shortly after Blood and Metal, Cable was given his own ongoing title. Issue #6 (Dec. 1993) confirmed the character to be Nathan Christopher Summers, the son of the X-Man Cyclops and Madelyne Pryor, who had been taken to the future in X-Factor #68 (July 1991), introduced by writer Chris Claremont, and appeared in Uncanny X-Men #201 (Jan. 1986). The series ran from May 1993 until August 2003, including the revamping of the book to Soldier X, and the book initially had trouble finding a stable creative team. A writer/penciller team would complete no more than three issues in a row until Jeph Loeb and Ian Churchill began work on issue #20 and finish on #35. Loeb and Churchill provided the first instance of stability, working together on fifteen of the twenty issues from #20-39. During their run, they explored characters in Cable’s past, his feeling of responsibility toward Nathan Grey, his relationship with Domino and Blaquesmith, and further adventures with Kane, the Sugar Man, and the Microverse.

The 1994 miniseries The Adventures of Cyclops and Phoenix provided further information on the character's back story. In the future, Mother Askani, a time-displaced Rachel Summers, pulled the minds of Scott and Jean into the future where, as "Slym" and "Redd", they raised Cable for twelve years. During their time together, the "family" prevented Apocalypse from transferring his essence into a new body, ending his reign of terror.[11]

After his solo series ended, he was paired with the mercenary Deadpool in a new ongoing series.[12] The series largely dealt with Cable's efforts to change the world for the better, including turning his old spaceship Greymalkin into the floating utopian island of Providence.[13] Around the same time period, Cable becomes a member of a team of X-Men that consists of Rogue, Iceman, Cannonball, Sabretooth, Mystique, Lady Mastermind, and Omega Sentinel.[volume & issue needed] In preparation for Messiah Complex, Cable seemingly died when he detonated Providence remains to prevent Gambit and Sunfire from stealing his database,[volume & issue needed] causing the series to focus mostly on Deadpool for the next six or so issues. This series was canceled at the fiftieth issue and was replaced by two series starring each of the characters.

It is revealed that Cable survived, and has the mutant baby girl that the X-Men, Marauders, and Purifiers have been seeking during the Messiah Complex storyline.[14] In 2008, Marvel Comics released Cable vol. 2, a new ongoing series by Duane Swierczynski and artist Ariel Olivetti.[15] This new series directly follows the events of "Messiah Complex". The series features Cable, and the messianic child's time traveling adventures. The dangers of the future and pursuit by Bishop are balanced with the humor of "Cable the soldier" becoming "Cable the Nanny."[16]

It is revealed that Cable and the mutant messiah have taken refuge in the future in the secluded safe haven of New Liberty. There, Cable gets married to a resident, Hope, who later dies defending the child. Cable decides to name her Hope, in honor of her deceased stepmother.[17]

In 2009, Cable vol. 2 had a seven-issue crossover with X-Force, X-Force/Cable: Messiah War, which is the second story in a three-part storyline that began in X-Men: Messiah Complex.[18]

After the events of the Messiah War, Hope and Cable are separated in time, appearing in the same spot but in different years. When Cable touches down from the spot, he appears two years after Hope, and is steadily losing control of his body due to the techno-organic virus within him. It alters his appearance so much that Hope doesn't register Cable's face.[volume & issue needed] Eventually, Bishop, using his codename as a way to portray himself as a holy figure, gains on them, and Cable and Hope jettison themselves into space in the last ship the planet had. Bishop, armed with a thermonuclear device in the stump of his arm, states that he knows how to make his own ship and it'll only be a matter of time.[volume & issue needed]

The 2010 event Second Coming built upon the events of both Messiah Complex and the cancelled Cable series, and as part of the storyline, the character was killed. Within the narrative, the character succumbs to the techno-organic virus in his bloodstream while holding open a time-portal that allowed other members of X-Force to escape from the future. The death was shown in X-Force #28 written by Craig Kyle and Chris Yost, who noted that, "For us, Cable was always a character whose death was something the character himself would put forward — if that's what it took to complete his mission, he wouldn't think twice about it."[20]

On July 27th, 2011, Marvel announced at the San Diego Comic Con that Cable will return in December 2011. The project, originally titled as "Cable Reborn", now re-titled as "Avengers: X-Sanction". will be written by Jeph Loeb and drawn by Ed McGuinness.[21][22]

According to Duane Swierczynski, although the writer "missed Cable's heyday in the early 1990s," Cable is "[his] kind of antihero — the cryptic, Man With No Name of mutantkind. If [Swierczynski had] quibbles with the Cable of yesteryear, it's that he was just a tad too powerful. [Cable] could port around the world at will, fetch beer from the fridge with the power of his mind, and then crush said beer can against his metallic love handle."[23] When asked whether Nathan Summers was a tragic character in his mind, Swierczynski replied that, "Cable's still a bad ass soldier, make no mistake. But [the mission to protect Hope Summers in X-Men: Messiah War] is breaking him down like he's never been broken down before" and said that "[the readers are] going to see Cable struggling with a new bodily problem, one directly borne out of his experiences in 'Messiah War.'"[24]

Cable was born with telepathic and telekinetic abilities, however, the extent to which he has been able to utilize these powers have varied dramatically throughout his appearances. Originally both were limited by his need to restrain his techno-organic infection and his powers were negligible compared to his more traditional fighting skills. However, following the subsidence of the infection they gradually increased to the point where they were similar in magnitude to those of Nate Grey, to whom he is genetically identical. At their height, he demonstrated the ability to simultaneously levitate the floating city of Providence and combat the Silver Surfer.[25] Following that story, his powers were burnt out and he replaced both with technological substitutes. Later he states that both his telepathy and telekinesis have faded to nothing.[26]

During Messiah War, during the fight with his clone, Stryfe, Cable demonstrates the ability to hide others from Stryfe's mental view, implying that at least he retains some of his telepathic powers. He also still possesses some of his telekinesis, but he is using it solely to keep the techno-organic virus in his body at bay.[27][28]

Cable also made use of a spear-like weapon called the Psi-Mitar, which was originally a long staff with a spear point on one end and a scythe blade on the other, used primarily by the Askani. It functions as a focus and amplifier for telepathic or telekinetic power, which it can project as power blasts.

In addition to his mainstream Marvel Universe incarnation, Cable has had been depicted in other fictional universes.

In the Earth X timeline, the Techno-organic virus has overtaken Cable's body, who has become a blob of organic metal.[volume & issue needed]

In the fantasy world depicted in the graphic novel Wolverine: Rahne of Terra, Cable's counterpart is a wizard called the Mage, who carried the Warlock Staff and a crossbow.[29]

In Ultimate X-Men, Cable is a future version of Wolverine who goes back to the past to capture Professor Xavier, returning with him to the future in order to train him for the coming battle with Apocalypse[30] After Apocalypse's death, Cable fades out of existence.[volume & issue needed]

A two-part storyline in What If... asks, "What If Cable Destroyed the X-Men?" In this story, Cable clashes with Professor X and the X-Men over their beliefs and differences in methods. Ultimately, Cable leads a faction of mutants loyal to him and assassinates the Professor, Cyclops, and Jean Grey before embarking on a violent crusade. Cable is ultimately killed by Wolverine,[31] but his actions have already led to the further oppression of mutants. Magneto attempts to take control of America in the chaos, but is killed by a new model of plastic Sentinels, who decide that enslaving humanity is the best way to root out mutants. However, Wolverine assembles several surviving mutants to fight against the Sentinels as a new team of X-Men.[32]

X-Men Forever is an alternate universe written by Chris Claremont that takes place after the events of X-Men vol. 2, #3. In it, it is revealed that X-Factor's confrontation with Apocalypse ended differently — Nathan was saved, but aged somehow from a toddler into a child.[volume & issue needed] Nathan lives with his great-grandmother and grandfather in Alaska. An attack by mysterious agents causes Nathan to be moved to the protective custody of the Starjammers. [33] He is shown to possess telepathic powers. Cable appears in one panel of the series but no connection between Cable and Nathan is made.[volume & issue needed]

Cable #34-35 were part of the "Onslaught" storyline, which was a top vote getter for the Comics Buyer's Guide Fan Award for Favorite Comic-Book Story for 1997.

The stories have been collected in a number of trade paperbacks.