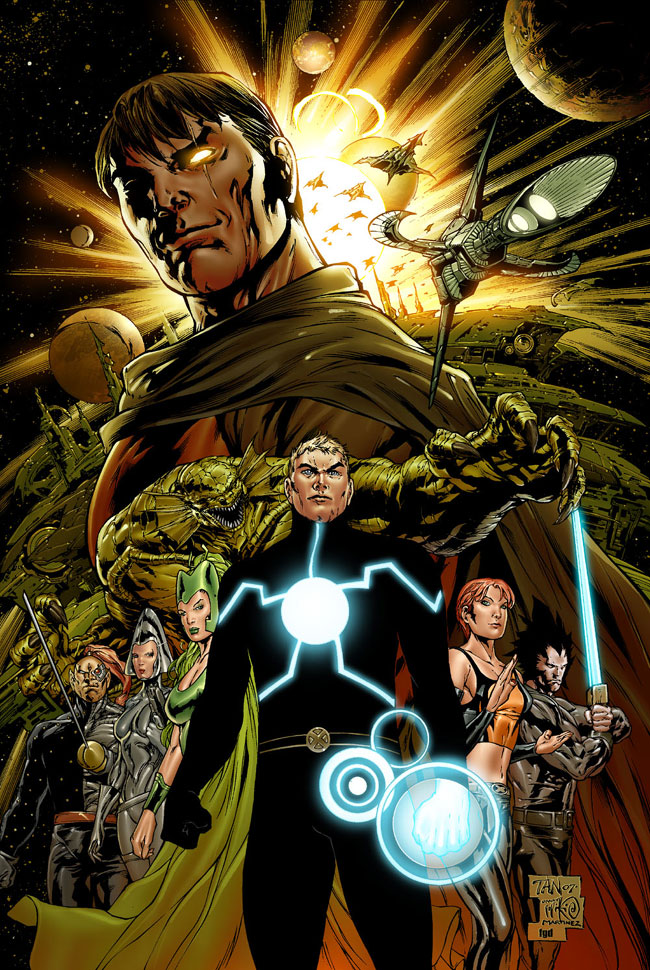 memberlist=
subcat=
hero=
villain=
sortkey=PAGENAME|The Starjammers are a al team of space pirates from the pages of the "" s published by . The Starjammers first appeared in "" #107 and were created by and .

The story of the Starjammers began with Christopher Summers, a pilot returning with his family from a trip to . Without warning, their plane was attacked. Chris's wife, Katherine, strapped their two sons (Scott Summers and Alexander Summers who later became the X-Men Cyclops and Havok) to their only and pushed them out of the plane, saving their lives. The husband and wife were then teleported from their plane to the ship of an advanced alien race called the . This had been a zoological scouting mission to bring in a . They were brought before , the then ruler of the Shi'ar Empire, who was immediately smitten with Katherine, making her his and sending her husband to the slave pits. Eventually, Christopher escaped and reached D'Ken's private quarters to try to assassinate him. However, he was caught and punished by having his wife murdered before his eyes, and his unborn son cut out of her womb. His spirit broken, he was sent to a camp on another planet.

Formation of the team

While working in the mining camp, Christopher witnessed the guards mercilessly beating a feline-like female. He stepped in, trying to get them to stop, but was then beaten himself. The woman was taken to the holding cells and Christopher huddled up in a corner, ashamed of himself. A little while later, Raza and Ch'od passed by and asked Christopher for the whereabouts of their comrade Hepzibah. Unfortunately, Chris was too afraid to answer. After they had left, Chris felt guilty and went to the guards' quarters, starting a fight after killing one of them. Surrounded on all sides, Christopher's cause seemed hopeless when Raza and Ch'od jumped in. After getting past the guards, they freed the cat-woman and sneaked on board a Shi'ar starship. Christopher used his pilot call-sign, Corsair. Naming Christopher their captain, they became the Starjammers, a group of space pirates rebelling against D'Ken's leadership.

The Starjammers have had many adventures across the universe, many of them on Earth with the , during which Christopher Summers finally met his long lost sons, now X-Men. At times, the group ran with and even his consort, the ruler, . The group participated in the defeat of the cosmic threat Magus, assisted by Professor X and the New Mutants. When the s made an incursion into Shi'ar territory, the Starjammers were overwhelmed, kidnapped and duplicated. They were later rescued from their imprisonment by the X-Men.

The Hulk and recruited the Starjammers to assist in a raid on Troyjan held space, to rescue several friends of the Hulk. A violent fight broke out, with the Starjammers slaying several enemies. It was ended with an alien bureaucrat offered the option of the Starjammers and allies simply asking to see the person they wished to confront. The group was also temporary allies of the Avengers. For some time, they were prisoners of the Collector, a cosmic being interested in preserving unique specimens of life. They became trapped in a conflict between the Collector, and the well-meaning but dangerous efforts of Wolverine of the X-Men.

A recent "Starjammers" series introduced a new member of the Starjammers. Although some readers believed it was out of continuity, the events of the series were referenced in a recent entry in the "" series, confirming its canonical status.

The Starjammers figured significantly in the "Uncanny X-Men" story arc "The Rise and Fall of the Shi'ar Empire"," a 12 issues long story arc following on the events of .

Within this story arc, the long-lost third son of Corsair, Gabriel Summers, now the powerful mutant known as 'Vulcan', travels from Earth to Shi'ar space seeking revenge against the mad emperor D'Ken and the Shi'ar empire for the death of his mother and his own mistreatment by the Shi'ar. Through the course of the story, Vulcan allies himself with Deathbird to depose her brother the emperor, but later seems to side himself with D'ken against the X-Men and the Starjammers, who seek to stop his plans for revenge. Vulcan soon turns on and kills , and by marrying his ally (and sister of D'ken) Deathbird, assumes the throne of the Shi'ar empire himself. In the course of the finale, Corsair, Vulcan's father, is seemingly killed. Hepzibah is returned to earth with the X-Men, while Havok, Polaris and Marvel Girl remain behind. Havok decides to assume his father's position as leader of the Starjammers. Polaris opts to stay with him. Marvel Girl remains behind as well, having developed an intimate relationship with Korvus, a Shi'ar warrior whose ancestor was once a host of the Phoenix force (like Marvel Girl); his giant sword allows him to access the force to a degree as well. The Starjammers new mission is to defeat Havok's brother and return Lilandra to the throne of the Sh'iar Empire.

Hebzibah expresses no wish to return to the Starjammers following Corsair's death, and has decided to stay on Earth and become an X-Men. The Starjammers are now: Havok, Polaris, Ch'od, Marvel Girl, Raza, Korvus and Cr+eee. ["Uncanny X-Men" #486]

The further adventures of the Starjammers are continued in the series: "X-Men: Emperor Vulcan", this miniseries (5 issues) is written by Chris Yost and pencilled by Paco Diaz. Havok & the Starjammers attacked Shi'ar space, Vulcan came with the armada to kill them, and a new alien race gets involved.

The new race's name translates to "Death to the Shi'ar", and they destroyed the Shi'ar flagship. ["X-Men: Emperor Vulcan" #1]

In the aftermath of the miniseries, Most of the Starjammers were captured and subsequently imprisoned by Vulcan. Lilandra, Korvus and Rachel Summers escaped and remain free at present.

Marvel has announced that the Starjammers will play a large role in the upcoming sequel to Emperor Vulcan called . [ [http://www.newsarama.com/comics/080823-XMenKingbreaker.html Chris Yost Talks X-Men: Kingbreaker] , , August 23, 2008] They will also be seen prominently in the storyline, which also features Vulcan, the , Nova, and The Guardians of the Galaxy. [ [http://www.comicbookresources.com/?page=article&id=17456 CCI: DnA and Rosemann on “War of Kings”] , , July 27, 2008]

*Binary: a mutated form of Carol Danvers which controlled vast amounts of cosmic energy, had superstrength, flight, and the ability to survive unaided in space
*Corsair: Former leader, father of the X-Men Cyclops, Havok, and Vulcan
*: Large reptilian creature, a member of the Saurid race.
*Cr+eee: a white, furry companion for Ch'od which only he can understand
*Havok: Alexander Summers, Current leader/Captain, former X-Man, fires plasma blasts.
*Hepzibah: Corsair's lover, a member of the Mephitisoid race; her true name is nearly unpronounceable to humans. Current member of the X-Men and X-Force.
*Keeyah: a who briefly acted as pilot.
*Korvus: descendant of a Shi'ar host for the Phoenix Force, has gone rogue.
*: a Shi'ar .
*Marvel Girl: Rachel Summers, former member of the X-Men and Excalibur; telepath/telekinetic, has been a host for the Phoenix Force.
*: Empress of the Shi'ar Empire.
*Polaris: Lorna Dane, former X-Man, controls magnetism.
*: Founder of the X-Men, Briefly a member after the events of #200
*Sikorsky: Insect-like robot, expert-physician
*Waldo: the of the Starjammers' ship, destroyed beyond repair

*
*
* [http://www.uncannyxmen.net/db/pov/showquestion.asp?faq=6&fldAuto=55 Uncannyxmen.net feature on the Starjammers]