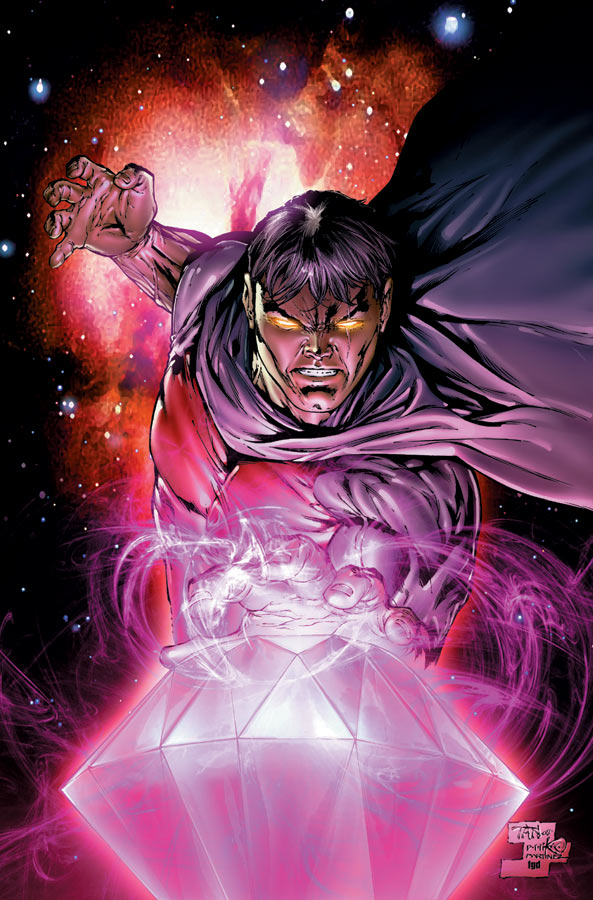 Vulcan (Gabriel Summers) is a in the . He first appears in "" #1, and was created by and . He is the to be revealed, a younger brother of characters Cyclops and Havok.

Vulcan's history began on the throneworld, as the unborn child of Christopher and Katherine Summers (parents of Cyclops and Havok). Katherine was when the Summers were abducted by , Majestor of the Imperium, and her child was seemingly killed when the mad emperor, in retaliation for an attempt by Corsair to escape, stabbed Katherine and killed her. The infant Vulcan was removed from Katherine's lifeless body and placed in an incubation-accelerator, which are used to breed new slaves, aging him to the prime .

Sent to Earth to become a slave for Erik the Red, the Emperor's hand on Earth, he escaped to be found by with little or no memories of who he was or where he came from. She took him as her ward, and instructed him in the use of his nascent powers. He claimed his name was Gabriel, but he chose the code name of Vulcan from a book on , and Charles Xavier recognized his mental imprint as being related to Cyclops. He became part of a team of formed by Petra, Darwin, and Sway that attempted to rescue the original X-Men from . Feeling Vulcan as a menace, Krakoa sent a human shaped volcano to deal with his team, killing the two girls and leaving Darwin and Vulcan for dead.

With the help of his dying teammates, Vulcan was able to survive. Reawakened in modern days by the mutant energies released during M-Day, he returns from his space exile to get revenge against , killing Banshee in the process, as well as attempting to kill Logan and even kidnapping and Cyclops.

Vulcan subconsciously uses the absorbed powers of Petra and Sway to manipulate the X-Men, and figures out the truth of the mystery behind the missing team of X-Men that were lost on Krakoa. Vulcan is able to lure Professor Xavier out of hiding, and confronts him in front of the X-Men, wanting the Professor to reveal to them all what really happened to Vulcan and his team. However, Xavier is unable to do so, because, in the wake of M-Day, he is no longer a Mutant. Enraged, Vulcan commands Marvel Girl to link their minds so that everyone can see what transpired. Reluctantly, Rachel does so, and with Xavier as a guide, she is able to not only reveal the truth behind what really happened on Krakoa, but she also detects another consciousness within the mind of Vulcan.

It is revealed that Vulcan and his team rescued Scott from Krakoa (it was previously thought that Krakoa itself released Scott to bring it more victims), and Vulcan was able to hurt the living island, which greatly enraged the creature. Vulcan revealed to Cyclops that they were in fact brothers, and sent Cyclops away on their jet to safety. As the jet took off, Cyclops watched in horror as the living island struck down and seemingly killed Vulcan and his team. Sway was hit first, and severed in two at her torso. Her body released the last of her mutant power to slow time down around them. As Petra was incinerated, she also reacted reflexively and drew them all below the surface into a cave that her power created. There, Vulcan and Darwin lay dying, and Darwin transformed himself into energy and bonded with Vulcan, thus saving them both. They were launched into space along with the Krakoa land mass by Polaris and remained inert until the massive backlash of power resulting from M-Day awakened Vulcan.

After the apparent death of Vulcan and his team, Cyclops returned to Professor Xavier in a hysterical state, blaming himself for their deaths, and the Professor decided it was best for all involved if he altered their memories to forget about Vulcan and his team, and spare everyone the agony. With these revelations, Marvel Girl reaches into Vulcan's mind and releases the subconscious inert form of Darwin, which Vulcan expels from his body. Using this opportunity, the X-Men attack him as they deem him too dangerous to be left alone. Vulcan easily repels their attack and flees the planet, renouncing Cyclops as his brother, and heads for space with the vision of D'Ken killing his mother raging in his mind, bent on revenge.

The Rise and Fall of The Shi'ar Empire

While traveling through Shi'ar space, he learns from a crew member whose starship he had destroyed that has been comatose for years after his experience in the and that is the current ruler of the Shi'ar. Undaunted, Vulcan continues on his quest for vengeance by engaging a trio of Shi'ar warships, and destroying two of them, thereby showing his superiority to the crew of the surviving third ship, which Vulcan then commandeers for his own. After reaching the inner territory of the Shi'ar throneworld, Chandilar, the ship is confronted and ordered to surrender by the Imperial Guard. However, the captain of Vulcan's ship had deceived Vulcan as to the Guard's true strength, hoping to use him as a pawn in Vice-Chancellor 's plan to restore the old Empire; as a result, Vulcan is unprepared for the true power of the Guard, and especially their leader, Gladiator.

Vulcan kills several powerful guardsmen in combat (Neutron, Cosmo, , and Impulse, among possible others), but is defeated by Gladiator, and taken to a prison moon. He remains a prisoner there until an agent of the Vice-Chancellor frees him from his shackles, and directs him to another cell to free .

However, soon afterwards, Deathbird manages to convince him to at least delay his plan for vengeance, after the two become romantically involved. Vulcan then uses his powers to heal 's injuries. Afterwards, a grateful D'Ken asks Vulcan to marry Deathbird. After his wedding, Vulcan throws Professor Xavier into the , kills D'Ken, and names himself of the Shi'ar. Darwin leaps into the Crystal after Xavier, and soon after emerges with him. During the battle Vulcan kills Corsair, claiming he doesn't have a father and blaming Corsair for letting his mother die. Now with Xavier's lost telepathy restored by the Crystal, he, along with Nightcrawler, Warpath, Darwin, and Hepzibah, are sent back to Earth by Lilandra locking the ship's programming. Meanwhile, Havok, Marvel Girl, Polaris, , Raza, and Korvus form a new team of bent on defeating Gabriel once and for all, and salvaging the remains of the crippled Shi'ar Empire.

The civil war between Vulcan's forces and those loyal to the dethroned Lilandra rages on. Led by Havok and the Starjammers, Lilandra's forces gradually whittle away at Vulcan's forces, which are plagued by defections. The Shi`ar, contrary to Vulcan's expectations, are not happy to have an outsider as their ruler. Vulcan is discouraged by this, but Deathbird convinces him that they will come to accept him.

Warned in advance of a rebel raid on Feather's Edge, Vulcan and his fleet ambush the Starjammers. However, in the middle of the battle, his ship, the Hammer, is destroyed by the Scy`ar Tal (translates as "Death to the Shi'ar"). Vulcan and Gladiator attack the leader of the Scy'ar Tal and are easily defeated, whereupon they retreat deeper into Shi'ar space.

Marvel Girl makes contact with the Eldest Scy'ar Tal and discovers their true origin. The Scy'ar Tal were originally called the M'Kraan. Early in their history, the Shi`ar attacked them, killed a great number of their people, making the rest flee for their lives. Eventually, the Shi'ar settled on their planet, took the M`Kraan Crystal as their own, and passed down the legend of the M'Kraan Crystal as a sacred gift from their deities, Sharra & K`ythri. The M'Kraan then changed their named to Scy'ar Tal and devoted their culture and society to the destruction of the Shi`ar Empire. With their first attack, they destroyed Feather's Edge by transporting a star to obliterate it. After which, Vulcan makes contact with the Starjammers to call a temporary ceasefire.

Under the ceasefire, the Shi'ar and the Starjammers decide to take out the Finality, thus crippling the Scy'ar's biggest threat. Once Havok and Vulcan are in position to destroy Finality, the Eldest Scy'ar trys to stop them. Once Vulcan figures out how the Eldest is powered, he severs the connection Eldest has with his brothers, making him powerless. Once the connection is severed, the Scy'ar become unorganized, and the tide of the battle shifts to the Shi`ar. The Shi'ar then proceed to attack both the Scy'ar and the Starjammers. Meanwhile, Vulcan blasts Havok into a sun.

Vulcan decides to use Finality to destroy the Scy'ar by using the weapon to place a star in the middle of their fleet. Alex returns and, having absorbed enough power to burn him, decides to end things with Vulcan. While they battle, Rachael and Korvus try, but fail to stop the beacon that will initiate the attack by the Shi'ar. The Shi'ar Imperial Guard end Alex's battle with Vulcan by appearing with the Starjammers in captivity, threatening to kill them. Before surrendering, Alex destroys Finality. With Alex and the Starjammers in custody Vulcan declares that he will return the Shi'ar Empire to its former glory.

Vulcan appears on a monitor of Havok's cell on a prison and taunts him by telling him the events of . He says the baby, and all of mutantkind's hope is lost. Havok destroys the monitor and says that if one baby can be born so can another, meaning that there is always hope.

X-Men: Kingbreaker is an upcoming mini-serie that will be published by Marvel Comics. Taking place in Marvel's main shared universe, the story is still hidden but it will be revolving around Vulcan and the Starjammers following the conclusion of the mini-series Emperor Vulcan.This mini-serie will also lead to the War of Kings event.

Vulcan is a with the ability to manipulate energy. In addition to traditional energies of the Vulcan has displayed control over exotic energy like Cyclops' energy beams. This is often used to produce light, heat, force, and electricity, as well as warp or disable existing energy sources, tap into and suppress mutant energies, survive in the vacuum of space, and fly. Outside a planetary atmosphere his flight speed can even reach near the speed of light. He is able to surrogate nourishment through energy for a rather long time. He can also use the powers of others by manipulating the energy in their brain. When he uses his powers, his eyes glow, which is possibly a homage to his nephews Cable and . , and have confirmed him to be beyond an . However "Beyond Omega" is possibly a mistake by writer Ed Brubaker, since Omega-level already denotes unlimited potential. Most recently, he has been confirmed as an Omega-level mutant in "Uncanny X-Men" #483, his powers elevated to said level thanks to absorbing a massive amount of mutant energies from .

After being swallowed by the soil of , he absorbed the powers of his teammates Darwin, Petra, and Sway, giving him their powers of super adaptation, earth manipulation, and time manipulation respectively. He loses these abilities soon after his re-appearance.

All three Summers brothers have similar powers, as they are each able to absorb certain kinds of extraterrestrial energies and rechannel that energy from their bodies. Remarkably enough, while his brothers Alex and Scott are known to be immune to each others powers (presumably because of their blood relation), they are apparently not immune to Vulcan's (he manages to hurt Scott with no apparent trouble).

Vulcan's stories have been collected into trade paperbacks: