Rev. Stryker is a Christian fundamentalist televangelist who sees himself on a mission from God to destroy the mutant race.

In the film X2, Stryker is played by Brian Cox as an army colonel with a fervent desire to destroy mutants. Danny Huston portrays Stryker in the superhero prequel movie, X-Men Origins: Wolverine in which he is the villainous leader of the Weapon X project. In 2009, Stryker was named IGN's 70th Greatest Villain of All Time.[1]

Stryker is a religious fanatic, with a military history which may have involved the Weapon X project (the same project which results in Wolverine being given his adamantium skeleton). Stryker is characterized by his unequivocal hatred of mutants. So strong is this hatred that Stryker goes so far as to kill his own wife and mutant-born son immediately after his birth. Crazed and outraged, Stryker then makes a failed suicide attempt. As time passes, he is convinced that Satan has a plot to destroy humankind by corrupting prenatal souls, the result of this corruption being mutants. Additionally, Stryker eventually comes to see the birth of his mutant son as a sign from God, directing him to his true calling: ensuring the eradication of all mutants.

Driven by this newfound conviction, Stryker then becomes a popular but controversial preacher and televangelist. While his followers, including a secret paramilitary group called the Purifiers, commit hate crimes against mutants, Stryker arranges to have Professor Xavier kidnapped, brainwashed, and attached to a machine that, using his brainpower, will kill all living mutants. In order to stop this scheme, the X-Men are forced to join forces with their nemesis, Magneto. When the extent of his bigotry becomes obvious—he attempts to kill Kitty Pryde in front of a television audience, however one of his own security guards shoots and arrests him.

Stryker, who made no appearances until this storyline in X-Treme X-Men, was assumed forgotten. This time, it was revealed that Stryker had been serving a prison sentence as a result of the events of his previous actions. Lady Deathstrike, a character with ties to the X-Men's Wolverine, makes her way onto the airplane where Stryker was being transferred. Once there, she kills his guards and rescues him, then it is revealed that the two are lovers, and he immediately begins a crusade against the X-Men, focusing on Wolverine, Cannonball, the X-Treme X-Men team, and Shadowcat, against whom he apparently keeps a grudge.

Stryker sent a group of his followers against several of the X-Men, and kidnapped Kitty Pryde. Along the way, Kitty convinced Stryker that mutants were not an abomination, and he seemed to turn over a new leaf.

However, he recently came back as a major player right at the start of the Decimation following Marvel's House of M event, deeming the sudden massive reduction in number of the mutant population a sign of God, saying "He made the first step and now we have to take the next", basically rallying for genocide on TV. He was featured mostly in New X-Men as the main villain, but also appeared in other comics set during this time frame. With the help of Icarus, one of the Xavier Institute's students, he caused a bus to explode, killing about 1/4 of the de-powered students from the academy. Then he planned the assassination of Wallflower, ordering one of his snipers to shoot her in the head. Next he tried to kill Dust, though it was actually X-23. The deaths of Wallflower and Dust were Stryker's prime objectives, as he had been informed by Nimrod that both girls would destroy his army. Finally he attacked the institute with his "Purifiers," killing Quill, leaving Onyxx and Cannonball critically wounded, and hurting Bishop, Emma Frost, and other students. After Stryker's Purifiers were defeated, he was killed by the enraged boyfriend of Wallflower, Elixir.

Bastion charges Stryker to locate Hope and Cable, following their return from the future in the Second Coming event. His Purifiers, in conjunction with Cameron Hodge's Right footsoldiers, engage the X-Men and New Mutants. The Purifiers take out Magik with a weaponized ritual, Illyana is abducted by demons through one her own stepping discs. They also disrupt Nightcrawler's teleportation with a sonic attack, disorientating him. The battle culminates when Wolverine orders Archangel to take out Stryker. Warren shifts to his "Death" persona and slices Stryker in half at the waist with his wings.

Beast reveals that the leader of the anti-mutant conspiracy within the U.S. government that operated was an Admiral named Stryker, who is also linked to the creation of the Ultimate Marvel Universe's version of the Legacy Virus.[3] Stryker's son, Reverend William Stryker, Jr. later appears in Ultimatum as a leader of an anti-mutant coalition armed with Sentinel tech. probably stolen from SHIELD. He has cybernetic facial implants and resembles Ahab from the mainstream Marvel Universe and various alternate realities. 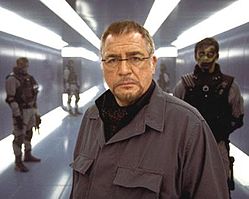