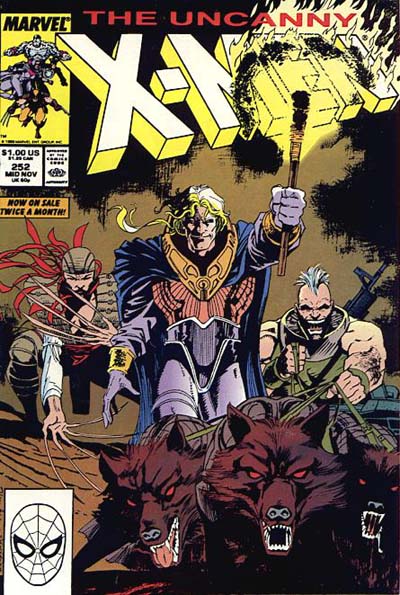 Elixir(formerly)
memberlist=
subcat=Marvel Comics
hero=
villain=y
sortkey=Reavers (comics)|In the al universe the Reavers are a of criminal s. The most significant team of Reavers were dedicated to the destruction of the mutant , and a number of them especially wanted to take revenge on one particular X-Man, Wolverine. The name was originally used by a gang of Australian cyborgs. The name later referred to a group under the leadership of , comprised of the three survivors from the original Reavers along with other cyborgs.

These Reavers should not be confused with the Reavers of the planet Arcturus IV, who exist in the future of the alternate reality and are involved in the histories of the members Starhawk and Aleta.

Donald Pierce and the Hellfire Club

The first of the future Reavers to encounter any of the was , when he was the White Bishop of the Inner Circle of the Hellfire Club, who bears bionic arms and legs. Once, when Wolverine broke into the Club's Manhattan mansion, he severed Pierce's cybernetic arm from the rest of his body. Months later, Pierce rebelled against the rest of the Inner Circle, which was dominated by mutants led by Black King Sebastian Shaw. Pierce abducted Shaw's aide Tessa and held her captive. However, Pierce was thwarted by Professor Charles Xavier and his new team, the . Tessa regained her freedom, and Pierce was expelled from membership in the Inner Circle.

had herself transformed into a cyborg by the other-dimensional being called Spiral, in an attempt to gain the means to kill Wolverine, as adamantium had been bonded to his bones in a process stolen from her father, . She then led Cole, Macon, and Reese in an unsuccessful attempt to slay Wolverine in . Wolverine was assisted in his escapes by the young .

Meanwhile a group of cyborg thieves calling themselves the Reavers had been operating out of a base in Australia. Their base was a which was inexplicably equipped with advanced computers and a sub-basement and tunnel system. The Reavers coerced the mutant teleporter Gateway to teleport them from Australia to locations around the world to conduct their violent robberies. Informed of the Reavers' existence by Roma, the X-Men expelled them from their Australian base, which they then co-opted for their own use. The X-Men destroyed some of the Reavers and forced most of the rest to enter the Siege Perilous. However, three Reavers (Pretty Boy, Skullbuster, and Bonebreaker) escaped.

The Reavers were then reassembled under the leadership of Donald Pierce. Pierce combined the three survivors of the original Reavers with Lady Deathstrike and the three former Hellfire Club mercenaries into a formidable team. While the X-Men, whose numbers had dwindled, were away from their Australian base, the Reavers retook the ghost town. When Wolverine returned from a leave of absence in to find the X-Men gone, he was taken by surprise, captured, tortured and crucified by the Reavers.

Meanwhile, Psylocke who had a premonition (her sporadic powers of precognition combining with Gateway's Aboriginal "dreamtime") of danger waiting in the ghost town, took drastic action to escape when the X-Men were teleported back to the ghost town. Through telepathic , she forced the remaining X-Men (herself included) to travel through the Siege Perilous, barely escaping the approaching Reavers and mystically rebirthing the X-Men elsewhere with no memory of their real lives. Wolverine later escapes the Reavers only with the aid of Jubilee.

Around this time, in Punisher Volume II #33, three Reavers, Bonebreaker, Reese and Pretty Boy, are dispatched to a New York warehouse after Microchip, an associate of the , in a self-confessed mistake, infiltrates their computer system. The temporary absence of Gateway gives Punisher and Micro enough time to evacuate and set up resistance. One of the Reaver's biggest obstacles is a device designed by Micro, nicknamed "". Its telescoping guns and multi-directional fire become very difficult to overcome. Even though, Punisher and Microchip barely survive. The "Dalek" and the warehouse are destroyed and the two escape through the sewer. In Punisher Volume II #34 the Reavers face off against the Punisher again, this time he is wearing a Robotic Exoskeleton he receives from Microchip's cousin. In the firefight, the Reavers kill Microchip's cousin along with damaging the Exoskeleton. In the end, the Punisher excapes and blows up the Exoskeleton with the Reavers on top of it. The explosion causes heavy damage to the three Reavers who then retreat beaten.

The Reavers then attacked , theorizing that it was Wolverine's most likely destination. During the assault on Muir Island, Skullbuster was rendered inoperative by sniper fire from Forge. ["Uncanny X-Men" #255] Donald Pierce later transformed a gravely wounded pilot named Cylla Markham into the new Skullbuster (although she usually just went by the name Cylla).

As part of the Upstarts' game, Trevor Fitzroy dispatches his own Sentinels to the Reavers' Australian hideout to kill Pierce (and anyone else they found there). In the ensuing battle, only Pierce, Lady Deathstrike and Cylla escape the massacre, Pierce seemingly only making it as far as the Hellfire Club before he was "killed". Cylla later resurfaces, allying herself with in an attempt to murder Wolverine. However, Bloodscream betrayed her and sucked the life from her, killing her.

However, most Reavers somehow survive their supposed deaths. They later return to battle the on behalf of the . [Cite comic|writer=|penciller=|story=Queen of Shadows|title= 2001 Annual|issue=|date=2001|publisher=]

Donald Pierce puts together a new group of Reavers, composed of young anti-mutant humans. This includes Elixir, who at the time was unaware that he was a mutant. They are defeated by a de-facto new version of the . Pierce himself has the skin decayed from his body by Wither. He is turned over to the police. Pierce had injured Wallflower during the battle. Elixir saves her, when his former comrades learn of this, they give him a beating and kick him out of the organization. The group later breaks Pierce out of prison and makes another attempt on Elixir's life, but they are defeated by the surviving core members of the original New Mutants team.

The Reavers returned to play a role in the current event, under the leadership of Lady Deathstrike [ [http://comics.ign.com/articles/827/827571p7.html IGN: X-Men: Messiah Complex - Day Thirteen ] ] . Judging from the design of their costumes, as well as their rhetoric in battle, these newest Reavers are simply existing members of the upgraded with cybernetics rather than classic members of the team. Deployed as an elite commando unit designed to eliminate organized mutant resistance, the Reavers manage to track down and confront Cable in Alberta, Canada before being attacked by the new X-Force.

In the ensuing battle, Deathstrike and the Reavers are all terminated by Wolverine's strike team, but not before killing the mutant Caliban and injuring Cable. Whether Deathstrike survived the clash, or whether the Purifiers will be able to upgrade more of their fighters with Reaver technology to replace the ones lost in Canada, remains to be seen.

In the , Reavers were a band of human traitors serving Apocalypse. They have been enhanced with Apocalypse's techno-organic virus, which allows them to merge with both organic and mechanical materials.

Rather than being a specific team of supervillains, the Ultimate continuity's version of the Reavers are human s who have undergone surgery to become cyborgs for the specific purpose of hunting down mutants on live television. They are led by Ultimate Deadpool. Some do retain the names of the 616 Reavers, such as 'Bonebreaker'.

* The Reavers, led by Lady Deathstrike, make an appearance in the 1990's X-Men TV series.
* The Reavers appeared in "". They are shown as servants of Spiral.