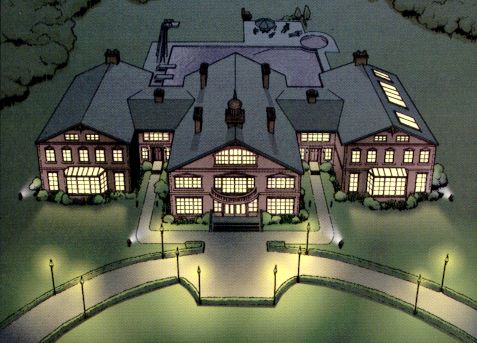 imagesize =
caption =
publisher = ,
debut = "X-Men" #1
creators =
type =
base=y
house=y
residents =
races =
locations =
subcat = Marvel Comics
altcat =
sortkey = PAGENAMEIn the fictional universe, the X-Mansion, the common name for the Xavier Mansion, is the base of operations and training site of the and the location of a for mutant s, the Xavier Institute for Higher Learning, formerly Xavier's School for Gifted Youngsters. It is also the worldwide headquarters of the . Its address is 1407 Graymalkin Lane, Salem Center (part of the town of North Salem), located in the very northeast corner of Westchester County. The school's motto is "."

The X-Mansion is the inherited property of Charles Xavier () and has been in the Xavier family for ten s.

As Xavier's School for Gifted Youngsters, the X-Mansion is the training site of the first two generations of X-Men:
* the original X-Men:
Cyclops, (aka ), Beast, Storm , Iceman, Angel, and later, Mimic (briefly), Havok, and Lorna Dane

* the original :
Cannonball, Wolfsbane, Mirage, Karma, Sunspot, Cypher, Magma, Magik, and Warlock, along with , a contemporary of the original New Mutants who was their classmate but was a member of the adult X-Men team instead

In "X-Men" v2 #38 (November 1994), the X-Mansion was renamed from Xavier's School for Gifted Youngsters to the Xavier Institute for Higher Learning, as most of the X-Men were adults rather than teenagers by this time. Xavier's School for Gifted Youngsters was relocated to the Massachusetts Academy in (a Marvel created town or region called "Snow Valley" somewhere in ), which served as the training site of the third generation of teenage X-Men, Generation X, beginning in "Generation X" #1 (November 1994).

The Massachusetts Academy closes permanently in "Generation X" #75 (June 2001). Shortly thereafter, the school for young mutants is reopened at the X-Mansion, but the name remains "The Xavier Institute for Higher Learning" despite the younger student body. The fourth generation of mutant teenagers, featured in 's "New X-Men" (2001-2004) and in "" (2003-2004; relaunched as "New X-Men: Academy X", July 2004 - February 2008), study at the mansion until it is destroyed during the 2007-2008 story "Messiah Complex" and the X-Men subsequently disband and close the Institute.

Though protected by high-tech defenses, the X-Mansion has often been breached by the s and evil mutants faced by the X-Men. Indeed, the X-Mansion has been destroyed and rebuilt several times. It was demolished in a battle with the in "Uncanny X-Men" #154 (February 1982) and atomized by in "Uncanny X-Men" #243 (April 1989). However, certain portions of the mansion, such as sub-basements, survived both attacks. When Onslaught revealed himself and fought the X-Men ("X-Men" v2 #54 (June 1996) and "Onslaught: X-Men"), the mansion took heavy damage, though was quickly repaired in-between issues after the "Onslaught" storyline. In , Bastion forced Jubilee to reveal the mansion's defenses. He then stripped down the mansion, having nearly everything inside the mansion removed. After defeating Bastion, the X-Men moved back into the mansion and restocked it, as detailed in "X-Men" v2 #70 (November 1997). Most recently, the X-Mansion survived an assault by the Imperial Guard in "New X-Men" #122-126 (March-July 2002) as well as a riot by students led by in "New X-Men" #134-138 (January-May 2003). In the Planet X storyline of "New X-Men" #146-150, however, the X-Mansion was destroyed; the rebuilding process could be seen in "New X-Men" #155-156 (June 2004). In the wake of M-Day the mansion was infiltrated by followers of the Reverend in an attempt to wipe out the students, resulting in some structural damage and several casualties. The mansion was also damaged when Mr Sinister's new team of Marauders attacked the mansion. More recently, a fight between the Hulk and several mutants damages the mansion. In the Messiah Complex storyline, the Mansion is completely destroyed by attacking Sentinels.

Unlike past times, the Mansion will not be re-built in the foreseeable future. Rather, the X-Men and their students will be relocating to a new base of operation in San Francisco. Under the name Graymalkin Industries, the new X-base will not be run as a school, but rather a sort of community center for mutants, who wish to develop their powers.

* Shadowcat teaches technology classes and is a member of the senior staff.

* Karma teaches French and is in charge of those students who are too young to join the New Mutants. She also oversees the library.

* Beast teaches science and mathematics and is part of the senior staff, presumably overseeing curricula and academic aspects.

* besides being the Headmistress of the Xavier Institute, also teaches English, business and ethics, much to the horror of Kitty Pryde. She also presides over the new team of X-Men, teaching them to work as a team, with some assistance from the senior staff, such as Colossus.

* Cyclops besides being the Headmaster of the Xavier Institute, also teaches the elective leadership and tactics.

The X-Mansion is in the shape of an . In the middle of the main courtyard is the Phoenix Memorial Statue, dedicated to the memory of . Notable rooms include the and a room containing . The Headmasters Office of Cyclops and is on the top floor. The is a popular hang-out; it was the site of a well-known game in "X-Men" v2 #4 (January 1992) in which the X-Men used their mutant powers. Directly below the basketball court is the hangar, which houses many transportation vehicles, as well as such as the X-Men Blackbird.

In this darker continuity, the X-Mansion is run by Magneto, who had long ago taken up Charles Xavier's dream. The mansion is vaporized in a nuclear explosion.

In the Ultimate universe, the X-Mansion does not differ much; however, it is not entirely funded by inheritance. Though the school originally was funded from Magneto's inheritance, allowing them to neither accept nor seek out donations. Its policies have since changed after Magneto's departure and Xavier's subsequent control over the facility. Later, the students question and ridicule the unlikeliness of the facility simply being funded by inheritance. It is then revealed that numerous donors fund Xavier's projects and remain anonymous due to heavy anti-mutant sentiments present in public opinion. One of the biggest donors was the Hellfire Club, who were revealed to have an ulterior motive for doing so. In Xavier's conversation with it's discovered that were former financiers before their falling out with Xavier (it is unknown what their intentions were). Recently the Church of the have become major investors.

The school's location is concealed by a projected image of a chapter, as revealed in "" #1.

* The X-Mansion serves as a hub in "".
* In "", Beast was trying to locate Apocalypse only for Apocalypse to invade the X-Mansion to steal the Xavier Protocol, capture Beast, and blow up the X-Mansion.
* In "", when Weasel is looking for somewhere to hide from , Professor X mentions that having S.H.I.E.L.D. Soldiers within his home would not sit well with his fellow X-Men.(Weasel was also a pest to the X-men because he repeatedly activated different veichles without authorization).

*The X-Mansion appears at the end of the "X-Men"/"" crossover novel "Planet X". Q and have a discussion while observing the X-Men on its lawn.