Her father Lord Dark Wind created the adamantium-bonding process that was forced on Wolverine. A self-styled warrior, Lady Deathstrike hired the villain Spiral’s "body shoppe" to bond adamantium to her own skeleton in addition to other cyber-genetic enhancements. She has since worked as a mercenary and assassin and feels a need to prove herself by killing Wolverine.

Played by Kelly Hu, a mutant version of Lady Deathstrike, without any of her backstory, appeared as a brainwashed henchwoman of William Stryker in the 2003 film X2: X-Men United. She also re-appeared in X-Men: The Official Game, where she was revealed to be Silver Samurai's apprentice. In 2009, Lady Deathstrike was ranked as IGN's 78th Greatest Comic Book Villain of All Time.[1]

She first appeared as Yuriko Oyama in Daredevil #197 and later as Lady Deathstrike in Alpha Flight #33. Yuriko Oyama was created by writer Dennis O'Neil and artist Larry Hama. However, writers Bill Mantlo and Chris Claremont added defining characteristics such as her connection to Wolverine. Artist Barry Windsor-Smith designed her cyborg appearance. 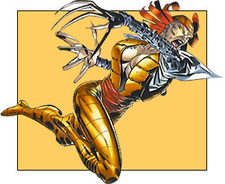 Yuriko Oyama was born in Osaka, Japan. Her father was Lord Dark Wind (Kenji Oyama), a Japanese crime lord and criminal scientist who created the process by which adamantium can be bonded to bone. Kenji was a former Japanese kamikaze pilot during World War II. His face was horribly scarred in a failed suicide attack on an American battleship. Feeling shamed by his failure decades earlier, he scarred the faces of Yuriko and her two brothers in a ritual design. Her two brothers would later die while in the service of their father.

Yuriko teamed up with Daredevil to free her lover, Kiro, from her father's servitude, and to gain vengeance against her father for her scarring and the death of her two brothers. She guided Daredevil to Lord Dark Wind's private island in search of Bullseye. When Yuriko slew Lord Dark Wind (just as he was about to kill Daredevil), the devoted Kiro chose suicide to honor his master.[2]

Distraught, Yuriko belatedly embraced her father's ideals and sought to track down whoever dishonored him and restore Japan's honor. She adopted a costumed identity, as a samurai warrior. She attempted to rediscover her father's adamantium bonding process. Her trail led to Wolverine, whose skeleton had been bonded with adamantium, which she desired to retrieve for study. Deathstrike sought to kill him to right the wrong what she considered the theft of her father's theories and thus restore her family's honor, ignoring the fact that Wolverine had been forcibly enhanced with adamantium; however, Yuriko and her followers were defeated by Wolverine and Vindicator of Alpha Flight.[3] She then went to the Mojoverse and sought Spiral's "body shoppe" where she received extensive cybernetic enhancements including adamantium bones and talons. As a cyborg, she became a professional criminal, and joined forces with former Hellfire Club mercenaries-turned-cyborgs Cole, Macon, and Reese. The four cyborgs stalked Wolverine and Katie Power in New York.[4]

Lady Deathstrike — along with Cole, Macon, and Reese — joined the team of criminal cyborgs called the Reavers, led by Donald Pierce. Together, the Reavers captured and crucified Wolverine.[5] She was accidentally teleported along with Wolverine and Puck to 1937 Spain. There, she joined forces with a Luftwaffe unit, and battled Wolverine. Her right arm was destroyed by a tank, and when she returned to the present she was given a new right arm.[6] The Reavers gang was broken up by Trevor Fitzroy's Sentinels and most of them were destroyed, though Deathstrike herself survived.[7] She later battled Wolverine and Sabretooth in Times Square.[8]

At times she has resigned her quest to kill Logan and has even worked with the X-Men cooperatively toward a common goal,[9] such as the defeat of Stryfe. In an encounter with Logan shortly after Magneto removed the adamantium from his skeleton, Lady Deathstrike again encounters Puck and Vindicator. The fight with Wolverine destroys much of Vindicator's house and ends when Wolverine reveals his bone claws. Lady Deathstrike is shocked and examines them closely. As Logan no longer possessed the adamantium stolen from her father, she now feels there was no honor to be gained by killing him. She leaves the premises peacefully. However, she still remains a mercenary and an assassin. Despite all this, Yuriko is set apart from many of the X-Men's foes in that she adheres to an honor code, despite being emotionally disturbed.

When Captain America unexpectedly appears in Japan after a year spent in another dimension, he manages to find Lady Deathstrike working with terrorists. Their goals were to drive American influence out of Japan, by any means possible, including mass murder. Captain America defeats her before any innocent lives are lost.

Deathstrike resurfaced as an ally of William Stryker.[10] She displays a new ability to access the Internet via her cybernetics but this led to her being co-opted and controlled by Mount Haven's computer systems.

Following her confrontation with Rogue and Sunfire, Deathstrike resurfaced as a member of one of the United States government's Army of Thunderbolts in the super hero Civil War, temporarily released from prison in order to go after the Secret Avengers, who resisted the Superhuman Registration Act. She fights alongside other criminals such as Venom, Jester, Bullseye, Jack O'Lantern, Taskmaster, and Songbird.[11] She participates in the final battle of the Civil War in Times Square, New York, before being sent to the Negative Zone Prison.[12]

Deathstrike returns during the Messiah Complex story to play an important role in the series, facing off against X-23.[13] This was confirmed by IGN Comics, who, in their editorial analysis "13 Days of Messiah Complex," revealed that Deathstrike would be leading a new team of Reavers throughout the event.[14] As reported, Deathstrike appears alongside the Reavers, now made up of nameless Purifiers with armor and weapons instead of any former members.[15] Having allied with the Purifiers to destroy mutant-kind, Deathstrike leads the new Reaver team against the New X-Men, gravely wounding Hellion in the process. Her armor was destroyed by X-23 and Rockslide. She appears again in pursuit of Cable and the mutant newborn[16][17] where she battled X-Force and X-23 again and X-23 nearly kills her.

Deathstrike is apparently saved from death due to the actions of Spiral, as she is later seen under repair in Spiral's Body Shoppe when Madelyne Pryor approaches Spiral with an invitation of membership in her Sisterhood of Mutants. Despite not originally being approached to join the Sisterhood, Deathstrike accepts Pryor's offer nonetheless.[18] It appears that while Spiral repaired Deathstrike's body, she also gave her a more submissive personality, as during missions with the Sisterhood, she continually does whatever she is told, while referring to Spiral as "Mistress".[19] After the Sisterhood resurrects Psylocke, they finally make their move on the X-Men, with Deathstrike being tasked to take down Wolverine, by piercing his lungs.[20] Deathstrike kept Wolverine busy while the Sisterhood raided his room for one of his most treasured possessions: a lock of Jean Grey's hair.[21]

Back with the Reavers

Lady Deathstrike was transformed into a cyborg by Spiral and the "Body Shop" using alien technology of Mojo's dimension, with later modifications by Donald Pierce. She has superhuman strength, speed, stamina, durability, and agility. Deathstrike's skeleton has been artificially laced with molecules of adamantium, rendering her skeletal structure practically unbreakable. Initially, it was a mystery as to how Deathstrike survived this process, as it is generally believed that without a healing factor, the process would be fatal to a human. Later, in the pages of Uncanny X-Men, it was shown that Lady Deathstrike, along with former Hellfire Club guards Cole, Macon, and Reese (the three of which had been nearly killed by Wolverine) were transformed into cyborgs by Spiral in her "Body Shoppe". It was during this process that Deathstrike gained her adamantium augmentation. Spiral used magic to infuse the metal into Deathstrike's body; it is unlikely that Deathstrike could have survived the process on her own. Deathstrike's fingers have been replaced by five 12-inch (300 mm) long adamantium claws replacing each finger of each hand. Aside from being as indestructible as her skeleton, these talons are capable of slicing through virtually any substance, other than adamantium itself and Captain America's shield. She is capable of telescoping these claws to twice their usual length. She also had the ability to interface with computers, allowing direct data access to her brain's memory centers. Although her normal form is obviously that of a cyborg, she uses disguises when necessary. She is an expertly trained assassin and is highly skilled in a variety of Asian martial arts. Lady Deathstrike is especially skilled with swords, and while she prefers stealth and subtlety in her killings, she is emotionally disturbed and this interferes with her effectiveness. Deathstrike suffers from mental instability; she is an unbalanced fanatic, a condition worsened by her transformation into a cyborg.[volume & issue needed]

Before she received her cybernetic enhancements, Deathstrike used a special five-foot steel katana that was electromagnetically tempered and sheathed in energy. The energy sheath enabled the sword to cut through most substances, except for Wolverine's adamantium claws and Vindicator's force field. She has also used shuriken, nunchakus, a high-powered long-range blaster firing armor-piercing explosive bullets, and wrist-bands containing adamantium detectors. She also wore a modified traditional Japanese battle-armor. Her items were constructed by weapon-smiths of Lord Dark Wind's organization.[volume & issue needed]

Deathstrike revealed that she possessed an accelerated "healing factor".[23] This cybernetic healing factor enables her to quickly repair damage done to her biological and cybernetic components. At one point, Lady Deathstrike engaged Wolverine in a fight in which she was heavily damaged. Wolverine noticed that his claws hadn't inflicted the sort of damage he had originally thought. Deathstrike revealed to him that his claws had caused the damage, but her latest visit with Donald Pierce resulted in an upgrade that provided her with a kind of "cybernetic healing factor" that functioned in ways similar to Wolverine's, although not as efficiently. Evidently, this power enables her to regenerate damage done to both her biological and cybernetic parts.

The left side of Yuriko Oyama's face was scarred in a ritual design by her father; this was apparently surgically repaired when she became a cyborg. Her cyborg nature is further evidenced by the wiring and circuitry visible at points along her body.[volume & issue needed]

Lady Deathstrike has also appeared in Ultimate X-Men. There, her connection lies mainly with Storm, instead of Wolverine as in the original storyline. As Yuriko (or 'Yuri'), she taught Storm how to hotwire vehicles and be a car thief. The two later had a falling out, and Yuri ended up being run over by a truck. Yuri survived, but needed to use a wheelchair. There, Dr. Cornelius of Weapon X offered to have her shattered body rebuilt with adamantium, extendable claws, and an accelerated healing factor based on Wolverine's DNA, which would allow her to have her revenge against Storm, though if she wanted to kill Storm she would have to kill Storm's friend Wolverine as well. Yuri agreed, and underwent the modifications. She later went after Storm and Wolverine, but was defeated, and later imprisoned by S.H.I.E.L.D..[24]

While imprisoned at the Triskelion she encountered the X-Men Dazzler and Angel (who were out searching for their friends, elsewhere in the base). After Dazzler taunted Yuri, saying how Storm had mentioned her to them, the power went out, allowing Yuri to escape her cell and stab Dazzler through the stomach. Before she could do anything else, the mutant Longshot (another prisoner at the Triskelion) snapped Yuri's neck.[25] Whether or not this attack killed her is unknown. She has previously survived being struck by lightning and smashed by a falling tree.[volume & issue needed]

Dazzler survived Yuri's attack, remaining in a coma for a few weeks before awakening.[volume & issue needed] 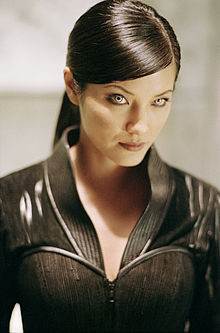