Chris Claremont (born November 30, 1950) is an award-winning American comic book writer and novelist, known for his 17-year (1975–1991) stint on Uncanny X-Men, far longer than any other writer,[1] during which he is credited with developing strong female characters, and with introducing complex literary themes into superhero narratives, turning the once underachieving comic into one of Marvel’s most popular series.[2][3]

During his tenure at Marvel, Claremont co-created numerous important X-Men characters, such as Rogue, Psylocke, Shadowcat, Phoenix, Mystique, Lady Mastermind, Emma Frost, Siryn, Jubilee, Rachel Summers, Madelyne Pryor, Sabretooth, Strong Guy, Captain Britain, Mister Sinister, and Gambit, scripted many classic stories, including "The Dark Phoenix Saga" and "Days of Future Past",[4] and along with collaborators such as John Byrne, developed the character of Wolverine into a popular fan favorite. X-Men #1, the 1991 spinoff series premiere that Claremont co-wrote with Jim Lee, remains the best-selling comic book of all time, according to the Guinness Book of World Records.

Chris Claremont was born Christopher S. Claremont[5][6] in London, England on November 30, 1950,[7][8] the son of an internist father and a pilot/caterer mother. He was raised primarily on Long Island. Alienated by sports-oriented suburbs, he did not collect comics in his youth, but read works by science fiction writers such as Robert Heinlein, as well as writers of other genres such as Rudyard Kipling and C. S. Forester.[3] In the late 1960s and early 1970s, Claremont attended Bard College, where he studied acting and political theory. He graduated in 1972.[3][9][10]

Claremont's career began in 1969, as a college undergraduate, when he was a gofer/editorial assistant at Marvel Comics.[1] In 1974, as an entry into comics writing, Claremont was given the fledgling title Iron Fist, which teamed him with John Byrne, their second collaboration, and their first since Marvel Premiere.

Though his acting career did not yield great success, he functioned well at Marvel, where he obtained a full-time position. Marvel editor-in-chief at the time, Len Wein, who recognized Claremont's enthusiasm for the new X-Men that Wein and Dave Cockrum had created in 1975, hired Claremont, a relatively young writer, to take over the failing series, reasoning that doing so would not draw opposition from other writers, given the book's poor standing. Claremont approached the job as a method actor, developing the characters by examining their motives, desires and individual personalities. This approach drew immediate positive reaction. According to former Marvel editor-in-chief Bob Harras, "He lived it and breathed it. He would write whole paragraphs about what people were wearing. He really got into these people's thoughts, hopes, dreams." Claremont's take on the series has also been likened to writing "the Great American Novel about complex character who just happened to fly", incorporating surprise character developments and emotional nuances amid the operatic battles that otherwise typified American superhero comics.[3]

During his 17 years as X-Men writer, Claremont wrote or co-wrote many classic X-Men stories, such as "The Dark Phoenix Saga" and "Days of Future Past". The second X-Men film was loosely based on his X-Men graphic novel God Loves, Man Kills.[11]

During his X-Men tenure, Claremont became especially known for his strong characterizations of the female members of the team,[12] particularly Phoenix and Storm. Under Claremont's direction, Jean Grey a.k.a. Marvel Girl, one of Marvel's first female heroes, underwent a huge transformation into the omnipotent Phoenix.[13] Similarly, Storm a.k.a. Ororo Munroe, became one of the first relevant African-American superheroines of the era. She was the first black female to play either a major or supporting role in the big two comic book houses, Marvel and DC Comics; one of her defining moments being successfully battling Cyclops for leadership of the X-Men.[14] In addition, Claremont co-created numerous other important female X-Men characters, including Rogue, Psylocke, Shadowcat, Phoenix, Mystique, Lady Mastermind, Emma Frost, Siryn, Jubilee, Rachel Summers, and Madelyne Pryor. (He also co-created such notable male characters as Sabretooth, Avalanche, Strong Guy, Captain Britain, Mister Sinister, and Gambit.)

In addition, Claremont helped launch various X-Men spin-offs, beginning with New Mutants in 1982. In 1986, Marvel launched X-Factor, altering the Phoenix/Jean Grey continuity Claremont had established. The spinoffs Excalibur and Wolverine followed in 1987 and 1988, respectively. In 1991, Marvel launched a second X-Men title simply called X-Men with Claremont and penciler Jim Lee as co-writers. X-Men #1 is still the best-selling comic book of all-time, with sales of over 8.1 million copies (and nearly $7 million), according to Guinness Book of World Records, which presented honors to Claremont at the 2010 San Diego Comic-Con.[15][16] The sales figures were generated in part by publishing the issue with four different variant covers which showed different characters from the book (and later a fifth gatefold cover that combined all four), large numbers of which were purchased by retailers, who anticipated fans and speculators who would buy multiple copies in order to acquire a complete collection of the covers.[17] Claremont left the series after the first three-issue story arc, due to clashes with editor Bob Harras.[3]

The 1990s saw Claremont diversify his comics work, as he wrote for other publishers, and wrote his own creator-owned properties. In 1992 he wrote the graphic novel Star Trek: Debt of Honor, which was illustrated by Adam Hughes. In 1993, he began writing the 12-issue miniseries Aliens/Predator: Deadliest of the Species for Dark Horse Comics, which was completed in 1995. In 1994, he wrote issues 10 - 13 of Jim Lee and Brandon Choi's series, WildC.A.T.s (volume 1) at Image Comics, in which he introduced his creator-owned character Huntsman.[18] In 1995 Claremont began writing his creator-owned series, Sovereign Seven, which was published by DC Comics, running for 36 issues until 1998.

In 1998, Claremont returned to Marvel as editorial director and the regular writer of Fantastic Four. He also wrote a Wolverine story arc. In 2000, as part of the company's "Revolution" event, he wrote Uncanny X-Men and X-Men until he moved to X-Treme X-Men with penciller Salvador Larroca.

In 2007, Claremont returned to New Excalibur, writing a story arc in which the character Nocturne has a stroke. He has also completed his first arc on Exiles, adding Psylocke to the team.

In 2008 Claremont wrote the miniseries GeNEXT, followed by its 2009 sequel, GeNext: United. He was also the writer of a X-Men Forever,[20][21] which takes place in an alternate universe, and focuses on the present day lives of the X-Men in a reality where Magneto never returned following the destruction of Asteroid M in X-Men #3 (December 1991).

Claremont’s approach to storytelling during his run on X-Men is considered groundbreaking. According to writer/editor Paul Levitz, Claremont’s complex story structures, "played a pivotal role in assembling the audience that enabled American comics to move to more mature and sophisticated storytelling, and the graphic novel."[2]

As the writer of X-Men, Claremont became known for certain characteristic phrases, such as Wolverine's saying, "I'm the best there is at what I do. And what I do...isn't very nice", which became closely associated with the character.[22]

A 2009 Slate article asserted that Claremont is the "soapiest writer in comic books.... The classic Claremont pose is either a character, head hung in shame with two enormous rivers of tears running down the cheeks as he or she delivers a self-loathing monologue, or a character with head thrown back and mouth open in a shout of rage, shaking tiny fists at heaven and vowing that the whole world will soon learn about his or her feelings." However, the article goes to state that "the genius of Chris Claremont was that he made mutants a generic stand-in for all minorities".[23] 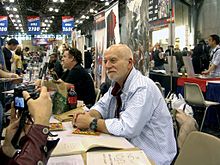 Claremont being interviewed on breaking into the comics industry at the New York Comic Con.

In 1987 Claremont began writing genre novels. His first foray into that medium was a science fiction trilogy about female USAF pilot/astronaut Nicole Shea, consisting of First Flight (1987), Grounded! (1991), and Sundowner (1994). Claremont also co-wrote the Chronicles of the Shadow War trilogy, Shadow Moon (1995), Shadow Dawn (1996), and Shadow Star (1999), with George Lucas, which continued the story of Elora Danan from the movie Willow. Claremont was also a contributor to the Wild Cards anthology series.

Claremont made a cameo appearance in the opening scene of the 2006 film X-Men: The Last Stand, for which he is credited as "Lawnmower man".

In December 2010 Claremont appeared at a book signing at Borders Books at Penn Plaza in Manhattan as part of a series of special events nationwide to commemorate World AIDS Day, with 25% of the proceeds of books sold at the event donated to Lifebeat, a nonprofit organization that educates young people on HIV/AIDS prevention.[4]

In July 2011 Claremont signed a deed of gift to Columbia University’s Rare Book & Manuscript Library, donating his archives of all his major writing projects over the previous 40 years to the Library's graphic novel collection, which will form the basis of a research center for New York City-based cartoonists and comics writers. Following the examination and processing of the materials, which include notebooks, correspondence, early story drafts, plays, novels, comic books and materials from Claremont’s early training in the theater and his career as an actor, a conference called Comic New York will be held March 24-25, 2012 at Columbia University's Low Memorial Library to mark the occasion, which is being organized by both the university's staff and editor Danny Fingeroth. Claremont’s archive will be housed at the Butler Library, separate from the graphic novel collection, and will be open to anyone who demonstrates a need for its use, with a Finding Aid being made available online. Claremont's longtime editor Louise Simonson said, "his papers will provide many clues, not only to the evolving way comic books are created and presented, but also how they are perceived, licensed, bought and sold in America and around the world."[2]

In the mid-1970s Claremont was married to Bonnie Wilford.[24] His current wife is Beth Fleisher,[2] with whom Claremont co-authored Dragon Moon.[25] Fleisher is also the cousin of editor Dan Raspler, who was the editor on JLA during the six-issue "Tenth Circle" story arc Claremont and John Byrne wrote in 2004.[26]