Elizabeth Allan - Osborn, who usually goes by the name Liz Allan (commonly misspelled, even in the published comics themselves, as Liz Allen[citation needed]), is a fictional character that appears in the comic books published by Marvel Comics. The character was created by Stan Lee and Steve Ditko. In the character's earliest appearances, she was an attractive, popular girl at the high school of the nerdy Peter Parker, who is secretly Spider-Man. She was an early love interest of Peter but differences in their levels of social acceptance kept them apart. Since then, she has been seen semi-frequently in various Spider-Man series and has ties to his adversaries the Green Goblin and Molten Man.

Liz Allen was a high school classmate of Peter Parker when they attended Midtown High School together, and a minor love interest of Parker and Flash Thompson.

An unnamed blonde female high school student in Amazing Fantasy #15 (August 1962) appears to be Liz Allan. Liz Allan is first named in The Amazing Spider-Man #4 (September 1963), the same issue in which Betty Brant first appears. Initially, Peter likes Liz. However, she is Flash Thompson's girlfriend and initially considers Peter Parker something of a loser, even taking part in the general ridicule that Peter endures on a daily basis. Her earliest appearances depict her as flighty and rather thoughtless - not outright cruel, but lacking the empathy necessary to perceive Peter's attractive qualities.

Over time, however, she begins to admire Peter's intelligence, and develops some degree of affection for the former "bookworm" (specifically, after issue 12: "Unmasked by Doctor Octopus"). By this time, however, Peter's interest has waned considerably, as he notes that Liz never showed any real interest in him until he began dating Betty Brant, and assumes that Liz's feeling are little more than a schoolgirl crush. Betty and Liz clash several times over Peter, as Betty thinks of Liz as a blonde tramp.

In Amazing Spider-Man #28 (September 1965), Peter and Liz graduate from high school. At the graduation ceremony, Liz admits her feelings to Peter, but tells him that they cannot be together and leaves shortly afterwards. In the same issue, Spider-Man battles the Molten Man, who in later issues is revealed to be Liz's stepbrother Mark Raxton.

She does not reappear for a few years, during which time Peter developed relationships with Gwen Stacy and Mary Jane Watson. When Liz returns, she dates then marries Harry Osborn, whom she meets at Betty Brant's wedding to Ned Leeds, becoming Liz Allan Osborn. The couple have a son, Normie Osborn. Their family history turns tragic, however, after Harry Osborn becomes the Green Goblin and later dies.

In the graphic novel Spider-Man: Legacy of Evil, Harry attempts to pass the legacy of the Green Goblin down to Normie Osborn but fails due to the efforts of Spider-Man, Mark Raxton and Ben Urich.

Later, Liz Allan dates lawyer Foggy Nelson, the legal partner of Matt Murdock (the superhero Daredevil). The couple breaks up after Mysterio manipulates Foggy into having an affair in a plot to drive Daredevil insane. Liz feels like Foggy has let her down and ends their relationship.

After Spider-Man publicly revealed his real identity in the "Civil War" storyline, Liz becomes resentful of him, blaming Peter for bringing so much death into their lives. However, after the events of the "One More Day" storyline, the public revelation of Peter's identity has been forgotten and Liz and Harry are not married anymore.

In the MC2 continuity, Liz Allan married Foggy Nelson after the death of Harry Osborn. She developed a fatal illness (of a non-specified nature), which contributed to her son Normie's breakdown and finally choosing to adopt the mantle of the Green Goblin.

In Spider-Man Loves Mary Jane, Liz Allan is portrayed as Mary Jane Watson's ditzy and feisty best friend. Liz is a cheerleader and has recently reconciled with her boyfriend Flash Thompson after breaking up with him because he declared that he loved Mary Jane at homecoming. 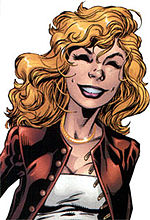 In the Ultimate Marvel continuity, Liz Allan goes to the same high school with Spider-Man and Mary Jane. She is close friends with Mary Jane. In Ultimate Spider-Man #4 (February 2001), a drunk Liz attempts to make out with Peter, who refuses her advances when Mary Jane sees them. They later have a very personal moment when both students are called to talk about the Green Goblin's attack on the school, which affected her greatly. Otherwise, there is no instance of any relationship between Peter and Liz. Liz claims to have had an uncle who was a mutant, who died, though she never explained what exactly happened. As a result of this, Liz has a phobia of mutants (in particular) and super-powered beings (in general), and it has been suggested by other characters that she worries that she herself is a mutant. When Johnny Storm joined her school briefly, she became extremely attracted to him and they shared a happy date - until he accidentally lit himself on fire, revealing himself as the Human Torch. Mary Jane reveals to Johnny that Liz believes that she lit him on fire. Due to her phobia, she refused to see him ever again, and he left the school.[volume & issue needed]

With the arrival of Kitty Pryde, a publicly known mutant and former X-Man, at Midtown High, Liz has been complaining to anyone that will listen that Kitty should be with her "own kind" and even accused Kitty of thinking she was better than everyone else due to her being a former X-Man, at which point Kitty rebutted Liz's accusations. Liz's best friend, Mary Jane, has also told Liz to keep her mutant phobia to herself when she's around MJ, and that she'd prefer it if Liz kept those thoughts to herself in general.[volume & issue needed]

It is subsequently revealed that Liz is a mutant herself, and the Ultimate version of Firestar. Her powers manifest and are witnessed by her friends during a beach party. At first, she accuses her date, Johnny Storm (the Human Torch), of making her super-powered. After a talk with the X-Men's Iceman and Spider-Man, and upon recalling that her 'uncle' was a mutant, she accepts that she may be a mutant herself.[volume & issue needed]

Magneto, intending to keep his promise of reaching Liz, is delayed by the combined efforts of Iceman and Spider-Man. However, they are no match for Magneto, though they are able to buy Liz the time she needs to get away. Liz returns home, and demands her mother tell her the identity of her father. Her mother reveals that her Uncle Frank, otherwise known as The Blob is actually her father and not her uncle after all. This conversation is interrupted by Magneto, who tells Liz that she must go with him to see her father. This is prevented when the X-Men arrive at her doorstep. Liz is pressured to decide between the Brotherhood or the X-Men. After asking Spider-Man's advice, she decides she doesn't want to follow either group, and that she is angry at her mother for lying to her all these years, and flies away. Spider-Man figures out that she's going to Mary Jane's house, and follows.[2]

After Liz arrives at Mary Jane's home, MJ suggests that she should talk to Kitty Pryde about being a mutant. Spider-Man arrives, and to gain Liz's trust, unmasks himself revealing that he is Peter Parker, one of her friends. Liz promises not to tell his secret just as Iceman arrives, offering Liz a place at Xavier's School so she may learn to control her newfound powers. Liz, unwilling to return to her mother's house, decides to be with the X-Men until she can figure out what to do next. She promises to call Peter and MJ soon.[3]

In Ultimate X-Men #94 it is shown that Liz has taken the codename Firestar and is now seemingly getting along with the X-Men and has better control of her powers. In the Ultimate X-Men/Fantastic Four Annual, she is revealed to be the "Human Torch member" of the future Fantastic Four team. The modern version helps the X-Men and FF battle various threats raised by the future team.[4]

It is shown that she will be in the fourth installment of Ultimate Comics: X